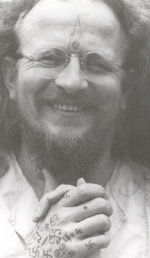 
Much to the horror of his Auschwitz-surviving Polish relatives, Patrick Charles Kemball, aka ManWoman, said a divine force demanded that he tattoo his body with swastikas and redeem the symbol. The word swastika originates from swastika in the ancient Sanscrit language of India where Su means 'good' and asti means 'let there be'; so the word literally means 'let there be good.'";

ManWoman is the pen name for Patrick Charles Kemball of Cranbrook. Featuring colour images of his paintings, ManWoman's autobiography Homesick for Eternity (Flyfoot/Sandhill $35) follows his transformation from a "normal, beer-guzzling, girl-chasing, car-crazy Canadian youth" into an artist. A 1989 San Francisco guide to what's hip included ManWoman in its Modern Primitives section and comedian Dan Aykroyd purchased his art for the House of Blues Collection. Born in the B.C. interior in 1938, ManWoman mainly lived with his wife Dale and their daughters in Cranbrook. "I've always been in a quandary," he says, "over the fact that my favourite spiritual sign and the most hated sign are one and the same." With countless photos and images, The Gentle Swastika: Reclaiming the Innocence (Flyfoot/Sandhill 2003) draws on popular culture to disprove the notion that the swastika is exclusively a symbol of evil. It was published in an Italian version, retitled as Hitler Did Not Invent The Swastika (Rome: Coniglio Editore / Rabbit Publishing, 2008).

"By the Twenties the swastika was everywhere," says ManWoman. "A 1909 Detroit car named the Krit used it as a lucky hood ornament. The Dawn Patrol, WWI American volunteers flying with the French Air Force, had the swastika as their symbol. Coca-Cola made a lucky swastika watch fob in 1925. It was the sign of good coal for the Swastika Fuel Company in Raton, New Mexico and was on the label of Carlsberg beer."

The swastika dates from ancient history. "It has been found on seals belonging to the ancient Harappan civilization [in Pakistan]," he says, "dating back three thousand years before Christ. The Greeks made extensive use of the swastika as a decorative as well as sacred symbol. Greek priests and priestesses often branded or tattooed swastikas on their arms, and later, when the custom of tattooing had disappeared, they put swastikas on their ceremonial garments. The Aztecs had a calendar wheel in use in fourteenth century Mexico. In the centre of a circular swastika is the sun."

Articles: 1 Article for this author
Correction


Thank you so much for reviewing my historical book Gentle Swastika: Reclaiming the Innocence. There was a small error. The publisher is not Flyfoot/Sandhill but Flyfoot Press. It's now available at Banyen Books. As well, HEEB Magazine, run by liberal young Jews in NYC, have just done an interview with me for their January issue. They warned me to brace myself for a flood of response.