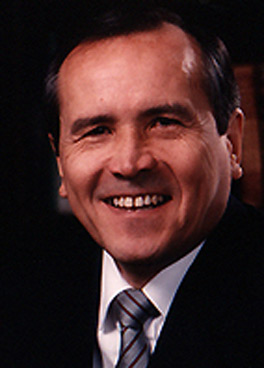 
Leonard Stephen Marchand became the first Aboriginal from British Columbia to be elected to Parliament in 1968 when he defeated Davie Fulton and became a Liberal MP for Kamloops-Cariboo. [Louis Riel, a Métis, was elected to the federal parliament in 1873 and 1874 but was not allowed to take his seat.]

Marchand became secretary to Jean Chrétien when he was Minister of Indian Affairs and also became the first Aboriginal to serve in the federal cabinet when he was named Minister for Small Business by Prime Minister Trudeau in 1976. The following year he became Minister of Environment and remained in that post until his defeat in the 1979 federal election.

After a stint as head of the Nicola Valley Indian Administration, Marchand became an honorary chief of the Okanagan Nation and a member of the federal Senate in 1984, remaining in office until his retirement in 1997.

Born in Vernon on November 16, 1933 in a family with eight children, Marchand lived on the reserve until age 23. He graduated from the University of British Columbia in 1959 and the University of Idaho in 1964, having a completed a Master's thesis on B.C. sagebrush. During the 1960s he was employed at the Range Research Station at Kamloops and at the Agricultural Research Station in Smithers.

His co-written memoir entitled Breaking Trail (2000) appeared the year after he received the Order of Canada. Although hardly a Red Power advocate, Marchand agreed the term Indian was absurd on geographical grounds. "I for one would be willing to go along with some appropriate word like Déné. It is meaningful and easy to say."