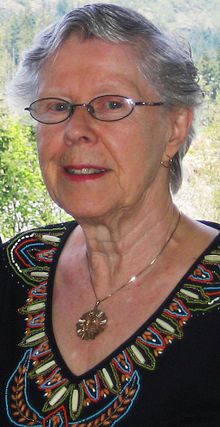 
Born in St. Boniface in 1933, George R.D. Goulet was the fifth of eight children who are ancestors of early French Canadian settlers. He attended St. Paul's High School in Winnipeg, gained a law degree at University of Manitoba, then a Master of Laws degree from the University of Toronto. He is the lone author of The Trial of Louis Riel: Justice and Mercy Denied. Other titles have been co-authored with his wife.

Born in Calgary in 1934, Sechelt-based Métis scholar Marie Therese Veronica "Terry" Goulet (nee Boyer de la Giroday) received a BSc (HEc) degree from the University of Manitoba. The couple has co-authored the independently published titles The Métis: Memorable Events and Memorable Personalities and The Métis in British Columbia: From Fur Trade Outposts to Colony. The latter was sponsored by the Métis Nation of British Columbia as a BC 150 project. It was officially released at the AGM of the Métis Nation of British Columbia in September 2008.

The University of Calgary has established the annual George and Terry Goulet Bursary in Canadian History in their honour. The Goulets are strong proponents for the exoneration of Louis Riel.

In September of 2008, George Goulet was one of the featured speakers at the commemoration of the Elzear Goulet Memorial Park in Saint Boniface because he is great-grand-nephew of the Métis martyr for whom the park was named. In October, 2012 George and Terry Goulet spoke before a Standing Committee of the Senate of Canada to examine and report on the legal and political recognition of Métis identity in Canada.

George Goulet writes, "Terry first moved to Vancouver in a laundry basket when she was thirty-four days old. Her father had been transferred here from Calgary. She lived in Vancouver on West 33rd until she was thirteen when her father was transferred to Winnipeg. Terry and I met in Winnipeg, where I was born. We married and had our children there. When our kids were small, we decided to move to Vancouver the day the temperature hit minus forty seven. We bought a house in West Vancouver in 1967 and lived in it until 1977 when we moved to Calgary where we both worked. We moved to Victoria for six months in early 1991 to research and write a book and lived in Vancouver again until towards the end of 1992 to continue with it, and then back to Calgary because we missed our grandchildren. We started coming to the Sunshine Coast intermittently for the winters starting in 2003. When we sold our house, we moved permanently to the Sunshine Coast in 2012. We have been Western nomads except for one year we spent in Toronto where I studied and received a Master of Laws degree from the University of Toronto in 1990 and Terry worked as an editor for an international legal publishing company."