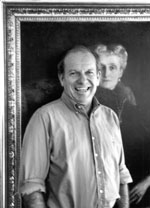 
"Unless you control your own economy, you cannot have your own culture and it is culture which finally determines the Canadian identity." -- Robin Mathews.

Robin Mathews, born in Smithers and raised in Powell River, graduated from UBC and worked as a producer for CBC Vancouver. "We have the privilege to grow up almost in wilderness," he says. "and we have the privilege to be distant from the centres of power. These combine to give us a kind of innocense. The genuine multi-culturalism of British Columbia teaches us at the earliest age that we are just people. It's the most beautiful place in the world!" Mathews taught at Carleton University for 20 years before returning to teach at Simon Fraser University in the Centre for Canadian Studies. He was also in Paris as a young academic in 1968 when the streets erupted with student-led protests and a national strike. He has collected more than 70 posters and 100 handbills from the turmoil. "Nearly ten million went on strike," he recalled 30 years later. "At one point there was a march in the steets of Paris of a million people." By comparison, the Canadian public has been docile about the management of their economy and culture. Mathews believes that "studying the narrow selection of great literary works largely from the two empires, Britain and the States, denies examination of our real selves." An ardent nationalist, he has been an outspoken critic of Free Trade and privatization. He has also argued for the destruction of liberalism in the 1970s as a precondition for creating a unique Canadian identity.

Robin Mathews' books such as The Struggle for Canadian Universities (co-edited with Jim Steele) and Canadian Literature: Surrender or Revolution (literary criticism) have drawn the ire of some academics and writers for alleged anti-Americanism. These were followed by Canadian Identity: Major Forces Shaping the Life of a People (Steel Rail 1988) and Treason of the Intellectuals (Voyageur 1995). "The general, agreed-upon reality in North America," he told B.C. BookWorld, "is a middle class reality and it defines the human condition in our time. But it is a narrow, blind view. My work calls into question the complacency of this reality, and that is why there are those who are disturbed by the reality my work represents." Particularly disturbed was the American-born UBC English professor Warren Tallman who conducted a public feud with Mathews for many years. Mathews' books of poetry include Language of Fire, The Beginning of Wisdom and The Death of Socialism and Other Poems (Voyageur, 1995). His collection of short stories is Blood Ties. In 2000 he published another poetry book, Being Canadian in Dirty Imperialist Times (Vancouver: Northland $15.95), followed by his eleventh volume of poetry, Think Freedom (Northland Publications, 2004). "We have few good political poets in Canada," wrote reviewer Ron Dart in the Pacific Rim Review of Books, "and Think Freedom ably demonstrates why Mathews is our best at the present time."

Robin Mathews lives and teaches and argues in Vancouver.

"And three, the genuine multi-culturalism of British Columbia teaches us at the earliest age that we are just people. It's the most beautiful place in the world!" Having returned to B.C. to teach Canadian Studies at SFU, Mathews has coincidentally published Canadian Identity (Steel Rail $14.95) analysing Canadian perspectives of reality and how these have been shaped.

"The general, agreed-upon reality in North America," he says, "is a middle class reality and it defines the human condition in our time. But it is a narrow, blind view. "My work calls into question the complacency of this reality, and that is why there are those who are disturbed by the reality my work represents."

"Why was the American Huckleberry Finn studied in an English course and not the Canadian Who has Seen The Wind?" he asks, "Studying the narrow selection of great literary works largely from the two empires, Britain and the States, denies examination of our real selves."

Mathews' protectionist beliefs have frequently drawn scorn. Ten years ago the American-born UBC poetry professor Warren Tallman, for example, went so far as to rent the Vancouver East Cultural Centre for an afternoon to defend himself against Mathews' charges and to perform a heated counter-attack on Mathews' anti-Americanism. "I have also been criticized for being a political poet," says Mathews, "Some people say 'Why don't you just leave politics out and write poetry?.' Well, in reality, art and politics are married.

"Every human being exists in a social order of class, religion and race which shapes the perception of one's reality and therefore, the work that one contributes.";You can't write with character if you pretend the reality which gives character does not exist. So I believe a writer shouldn't ignore politics."


"I'm not saying Robin Mathews is yet nearly as good as he's going to be. But he's so far ahead of the ruck, right now, that if he wanted to look back at them, he'd have to use binoculars." -- Milton Acorn
Language of Fire (Introduction)

Robin Mathews is, probably, the finest living political poet in Canada. Few can match his demanding metaphors, razor like insights, incisive probes into the nature of Canadian nationalism and the fate of most colonized Canadians.

Mathews was born in Smithers/BC in 931, and spent his early years in Powell River/BC. It was just matter of time before university would beckon him, and he attended UBC in the 1950s. He studied English Literature when at UBC, and encountered many of the worthies of the day while there: Earle Birney, Roy Daniells and others. This was a period of time when there was a much questioning amongst Canadians about their literary heritage.
Why was it that English and American Literature were studied at Canadian universities, but Canadian Literature was marginalized, ignored and rarely brought to front stage? Few are the states that would allow their literary, educational and political traditions to be co-opted by other states. Mathews was more than alert to the obvious problem, and it was time and training that was soon to converge to draw Mathews to the forefront of the Canadian nationalist debate of the 1960s.

Mathews taught at University of Alberta in the early-mid 1960s with Eli Mandel after doing an MA in the USA and beginning a PH.D. at the University of Toronto. He had studied with Northrop Frye when he was at University of Toronto in the late 1950s, and, unlike Margaret Atwood, he dared to differ with the reigning monarch of the Canadian literary establishment at the time. It is somewhat ironic that when Frye gave the Massey Lectures in 1963, The Educated Imagination, on the role of Literature, he never mentioned Canadian Literature. Mathews could not help but detect this obvious omission. Mathews the poet and literary critic, political activist and educator was internalizing much that would soon challenge Canadians in the True North to retake their history and way of being against the empire to the south.

Mathews' earliest books of poetry were published when he was in Edmonton: The Plink Savoir (1962), Plus Ca Change (1964) and This Time, This Place (1965) made it abundantly clear that Canada had a political poet on the stage that would not be silent on the tough issues that silenced many a docile, passive and compliant Canadian. The Mathews family left Canada in 1966, and Mathews taught at Leeds in England from 1966-1967. The family was also Paris when the strike took place that paralysed the nation in May 1968. Mathews collected most of the posters that were in Paris supporting the strike against De Gaulle, and the collection is now at SFU and is called the 'Esther and Robin Mathews Paris Poster Collection'.

Mathews compelling nationalism burst forth in fuller force in 1969 with the publication of The Struggle for Canadian Universities (James Steele was the co-editor). Why were Canadians sidelined at Canadian universities from being hired and Americans and English given priority? Mathews/Steele sought to correct this obvious wrong, and did so midst much controversy. This Cold Fist (1969) was also published at this engaging season of Mathews' life. Mathews was, increasingly so, a force to be reckoned with on the Canadian literary, cultural and educational stage-- he had now found a home at Carleton University in Ottawa, and it was from such a place he would go after the power elite in Canada.

When Margaret Atwood published Survival in 1972, Mathews could not be silent. He took Atwood to task for her reductionistic and simplistic read of the Canadian literary heritage. Atwood reacted in haste to Mathews. 'Mathews and Misrepresentation' remains to this day Atwood's classic response to Mathews just as Mathews' Canadian Literature: Surrender of Revolution (1978) is Mathews at his animated and moderate best, responding
to Atwood.

Air 7 (1972), Geography of Revolution (1975), Language of Fire: Poems of Love and Struggle (1976) and The Beginning of Wisdom (1978) made it obvious that Mathews was a political poet that had depth and sensitivity, a cold fist, a challenging head and a tender heart. Acorn did not often laud other poets, but he wrote the 'Foreward' to Language of Fire--- he suggested, in his graphic and not to be forgotten way, that Mathews would need to use binoculars if he ever hoped to see those of comparable poetic worth and stature in Canada.

Mathews was never far from the fray, and in 1985 things heated up yet once again. Mathews had rather innocently planned on doing a Carleton-SFU exchange teaching load for a year. The English department at SFU voted against have Mathews in their midst. Margaret Atwood, Pauline Jewett, David Suzuki, Ed Broadbent and many others came to Mathews' defence.
Letters, like well aimed and timed arrows, flew with much precision to both oppose and stand by Mathews side in the battle. SFU relented and Mathews was offered a position in Canadian Studies.

Mathews retired from SFU in the 1990s, but he is still active, writing literary criticism, poetry, ever engaged in the larger political and economic questions and a regular contributor to the Canadian nationalist website, Vivelecanada.

There is no doubt that Mathews is a distinctive Canadian icon and legend, and. without doubt, he is one of the finest Canadian nationalists par excellence.

[Ron Dart has taught in the Department of Political Science, Philosophy, Religious Studies at University of the Fraser Valley since 1990. Ron has published more than twenty books, and his book on Robin Mathews, Robin Mathews: Crown Prince of Canadian Political Poets (2002) is a primer on Mathews' life, poetry and politics.]
Ron Dart