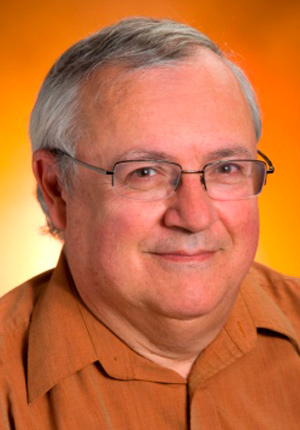 
Born and raised in Nelson, B.C., Sam McBride began his career as a newspaper reporter and columnist with the Kamloops Daily Sentinel. From there, following extensive travel through Western Europe and Britain, he used his reporting and writing skills in communications/PR jobs with the Yukon Territorial Government in Whitehorse and then Cominco in Trail.

He left B.C. in 1983 to work as a publicist with the Banff School of Fine Arts. From there Sam went on to Calgary and later Edmonton where he wrote and produced newsletters and annual reports, wrote speeches for cabinet ministers and senior executives, and was responsible for two-way communication with a variety of audiences. He managed the publicity associated with the official flames of the 1988 Calgary Winter Olympics, including a giant flame on the top of the Calgary Tower.

Peters the subject of Sam McBride's The Bravest Canadian - Fritz Peters, VC: the Making of a Hero of Two World Wars (Granville Island, 2012). Peters received the Victoria Cross for his pivotal role in the capture of the harbour at Oran, Algeria on November 8, 1942, later recognized as a turning point in World War II. Remarkably, Peters also received the Distinguished Service Order (DSO) medal for bravery in the Battle of Dogger Bank on January 25, 1915. Although a few Canadians had received DSO medals during the preceding Boer War, Peters is believed to be the first Canadian recipient in the First World War.

Sam McBride decided to do the book after he inherited an extensive collection of family letters, photographs and memorabilia that help tell the story of the Peters and Gray families. The Bravest Canadian -- Fritz Peters VC: The Making of a Hero of Two World Wars earned a 2013 Heritage Award from the Prince Edward Island Museums and Heritage Foundation and won first place in the 2013 B.C. Genealogical Society's Family History Book Awards.

Unique among Canadian war heroes because he won medals for valour in both world wars, Fritz Peters is a household name in PEI because he is the only PEI-born recipient of the Victoria Cross. Sales of Sam McBride's biography The Bravest Canadian -- Fritz Peters VC: The Making of a Hero of Two World Warshave been strongest in PEI, then New Brunswick and Nova Scotia, and then British Columbia, where he lived after moving to Victoria with his family at age eight in 1898. Very few Canadians were in active combat in both World Wars. Fritz Peters is unique in receiving multiple awards for valour in both world wars, including the VC and the equivalent of the Congressional Medal of Honor.

Fritz Peters' maternal grandfather, Col. John Hamilton Gray, was premier of PEI. In September 2014, a new commissioned sculpture of Gray will be unveiled and installed in downtown Charlottetown as part of anniversary celebrations.


To identify and keep track of his colorful ancestry, Sam has been active in genealogical societies in Alberta and B.C. since the early 1990s.

Keen on writing, current events and history from a young age, Sam earned a bachelor degree in Journalism and English at the University of Oregon, and a Masters of Communication Studies from the University of Calgary. His masters project on corporate partnerships with schools won U.S. national awards and cash prizes at the 1991 annual conference in Boston of the Association for Education in Journalism and Mass Communication. He taught "Writing Your Family History"; courses at University of Alberta Extension, and has led workshops on genealogical research. Currently a resident of Trail, Sam has long been keen on West Kootenay history, particularly as it relates to the lives of his two grandfathers who both arrived in nearby Rossland in 1900.


After several years of research and preparations, Sam McBride's biography of his great-uncle, Frederic Thornton "Fritz" Peters, VC, DSO, DSC and bar, DSC (U.S.), titled "The Bravest Canadian -- Fritz Peters, VC: the Making of a Two-war Hero" is out in the hands of the reading public. This week, Sam, a Trail, BC resident, heard that he won the Prince Edward Island Museum and Heritage Foundation's Heritage Award. He will be in Charlottetown, PEI, to accept the award on February 19th.

"I am thrilled that the Board of Governors of the Prince Edward Island Museum and Heritage Board have honoured me with a Heritage Award in recognition of my book The Bravest Canadian -- Fritz Peters, VC: The Making of a Hero of Two World War. It has been my great pleasure to write the first full-scale biography of Frederic Thornton ''Fritz'' Peters, based largely on a recently-discovered collection of family letters. The book has drawn strong interest across Canada and abroad, especially in Prince Edward Island, where Fritz is revered as the only P.E.I.-born recipient of the Victoria Cross." says McBride.

Fritz Peters came from a long line of prominent Islanders, going back to original proprietor George Burns and United Empire Loyalist Robert Gray, whose son Col. John Hamilton Gray (Fritz's grandfather) served as host and chairman of the Charlottetown Conference of 1864. Fritz's father Fred Peters and his uncle Arthur Peters both served as premier of the province. As Canada's most decorated naval hero, Fritz lived up to the traditions of his ancestors, and has a special place in P.E.I. history.''

"The Bravest Canadian -- Fritz Peters, VC: the Making of a Two-war Hero" is the story of mysterious Canadian war hero Capt. F.T. "Fritz"; Peters, VC, DSO, DSC and bar, DSC (U.S.), RN is told, based on more than 100 recently-discovered letters from and about him. He came from a prominent Maritime family with strong connections to British and Canadian history, including United Empire Loyalist leaders, military heroes, a premier of Prince Edward Island, a Father of Confederation, and shipping magnate Sir Samuel Cunard. After distinguishing himself with multiple medals for valour as a destroyer officer and commander in the First World War, Peters - who was born in Charlottetown, P.E.I. and later lived in Victoria, B.C. - returned to service at the outbreak of the Second World War, alternating between the Royal Navy and Britain's Secret Intelligence Service. His extraordinary courage and cool demeanor in leading an attack to capture the Vichy French-held harbour of Oran, Algeria in the Allied invasion of North Africa in November 1942 was recognized with the Victoria Cross and the U.S. Distinguished Service Cross - the highest award offered by the U.S. to a non-American.


Alice Marwood, Chair of the British Columbia Genealogical Society Family History Book Award Committee announced the winning author for 2012 as Sam McBride, of Castlegar, BC, for his book, The Bravest Canadian - Fritz Peters, VC: the Making of a Hero of Two World Wars, published by Granville Island Publishing. Sam McBride used a "wealth of family letters"; in his family history research, and aptly captured the life of this very important, but secretive Canadian.

Honourable Mention this year went to One Family's Journey: CANFOR and the Transformation of B.C.'s Forest Industry by Peter Bentley as told to Robin Fowler, published by Douglas and McIntyre. Robin Fowler was present to accept the award.

"The judges were pleased with the quality and variety of the books submitted";, said Alice Marwood. The BCGS Award presentations, held in Burnaby, BC, June 12, 2013, included lively talks by seven of this year's authors about their books and their research and publishing experiences - from the importance of locating and sharing family and community letters, journals and photographs, to finding an editor, to photographing archival documents, and even to 'haunting' graveyards. A strawberry tea, enjoyed by all, concluded the evening.

For more about the Award, see the BCGS website: http://www.bcgs.ca/?page_id=555