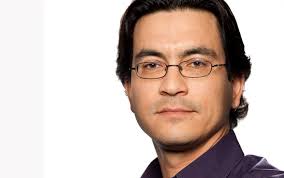 
Duncan McCue took over from Rex Murphy as host of CBC Radio's Cross Country Check-up. The former current affairs reporter for the CBC's flagship news show The National, is Anishinaabe and a member of the Chippewas of Georgina Island First Nation in southern Ontario.

His first book, The Shoe Boy (Nonvella Publishing 2016), is a memoir covering the five months he spent in a Cree hunting camp when he was seventeen. It was a pivotal time in McCue's life. The first chapter includes a story about an awards dinner McCue attends as an established journalist. Overhearing two producers talk about their camping experiences, he leans in to interject. "I once lived in the bush for five months," he tells them. "We washed our hair three times, in a laundry tub."

The women turned to him with curiosity. As he recalls it, "I'm the only Indian at the table. At parties full of smart and wealthy white people, I'm accustomed to being perceived as both exotic and oppressed. In such settings, I rarely share stories about the season I spent living in the wilds of northern Quebec with a Cree trapper and his family. But, tonight, this feels good."

He describes what he did at the Cree camp: "We trapped otter, muskrat, and beaver. We snared rabbits. We hunted grouse, ducks, and ptarmigan. We shot a caribou and a bear."

Then he writes, "In this crowd, I may as well be talking about my trip to Mars. But I'm not whipping this story as a badge of indigeneity, like a Costco card that proves I'm a paid-up member of the club. No, this story is like the rosary beads in my mother-in-law's purse: worn and comforting, yet an enduring symbol of mystery. It's been over twenty years since I went hunting in the bush with Robbie Matthew Sr., and I'm still trying to unpack what I learned there."

Consisting of less than ninety pages with minimal text on each page, The Shoe Boy seeks to represent the landscape and culture of a Cree nation recovering from the James Bay hydroelectric project of the 1970s.

"Relocating to Chisasibi promised to be like travelling to a familiar yet foreign land," he writes. "The Ojibwe and the Cree are neighbouring tribes, historically friends though sometimes enemies. Different, but not too different, like the Italians and the French, my father explained to his white university colleagues, who I expect couldn't quite fathom his departure. Isolated by geography, the James Bay Cree retained much of their traditional lifestyle, and everyone spoke Cree as their first language. This, in part, is what attracted my dad to the place. He saw his new job - managing the Cree school system - as an opportunity to learn something deeper about Indigenous culture. And, in the back of his mind, I'm sure he felt it would teach me something about my own Indian identity.";

McCue lives with his wife and two children in Vancouver.