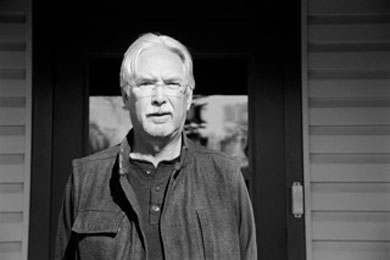 
Born in Calgary in 1944, Barry McKinnon moved to Prince George in 1969 and explored his environs in PulpLog, winner of the Dorothy Livesay Poetry Prize in 1992. His preceding book, The the, was nominated for a Governor-General's Award for 1980. McKinnon won the bpNIchol Chapbook Best Poetry Award for Arrythmia in 1994. His chapbook Surety Disappears was the runner-up for the bp Nichol Award in 2008. An earlier work entitled The Centre was reissued in an expanded version as The Centre: Poems 1970-2000 (Talonbooks, 2004). In the Millennium (New Star, 2009) is a thirteen-part collection of McKinnon's poetry drawn from a ten-year period.

McKinnon received his BA from Sir George Williams University in Montreal, where he studied with Irving Layton, and his MA from the University of British Columbia. He teaches English at the College of New Caledonia in Prince George, from where he also operates Gorse Press. McKinnon published Victoria Walker's Suitcase which received the Livesay Prize in 1990. A veteran of the Vancouver poetry publishing scene in the late 1960s, he has also published ten interviews with B.C. poet-publishers in a book-length edition of Open Letter. McKinnon writes mainly in the long poem/serial sequence. Over the years he has amassed a sizeable archive of "really good smelling" small press items such old issues of Tish magazine and gestetnered books.

Does a man have to break down.

The carcasses of spring. Talonbooks, 1971

He will sing before he disappears.

I wanted to say something. Red Deer College Press: 1990.

Articles: 2 Articles for this author
IN THE MILLENNIUM
Review


In the Millennium is a varied, 144-page collection in thirteen segments. It does not, at first glance, invite the reader in.

McKinnon stretches language and form. It takes a few readings to get the gist and admire it. Will readers have the patience? We live and read under the tyranny of instant access and these poems do not lend themselves to a quick hit. Yet someone has to do it; stretch the language.

The complex realities that inform his poems are fractured on the page, cut up, jagged, interspersed on spaced-out lines. Spliced assemblages do not make for pretty poems. McKinnon says he wants his poems to be "habitable and yet show dissolving forces.";

Section One is one of the most challenging and one wishes the editor had placed another section at the opening of this volume, such as a 20-page photographic journal about the abandoned saw mill town of Giscombe, or "Bolivia/Peru,"; which won the bpNichol Chapbook Award when it was first published by BookThug in Toronto.

About his travels in South America, McKinnon says he entered the experience "naked/naïve to it-perhaps the only way to risk any world's range of pleasures/dangers - to know a little more";. This is as true for travel as it is for experiments in poetic form. Enter boldly, learn something.

Born in 1944, McKinnon is of the age group currently saying goodbye to parents. His elegiac long poem on the death of his father concentrates on the father-son relationship. How awkward the small talk, how awkward the intimacy, how poignant the small memories, and then the relief when the father is gone.

"I came into this world again, a strange/ and conscious birth/ without word/without road/ without a father.


Make It True: Poetry from Cascadia (Leaf Press $30) contains writing from Cascadia, the bioregion lying west of the continental divide and spanning from Mt. Logan in Canada to the north and Cape Mendocino in California to the south. Edited by Paul Nelson, with George Stanley, Barry McKinnon and Nadine Maestas, the collection is an attempt to take back poetry culture from the trance cast by pop, consumer and industry-generated culture.