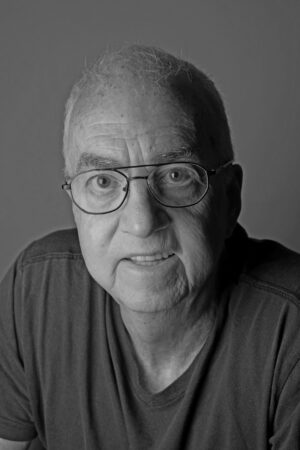 Trade magazine journalist and former Vancouver Sun reporter Don McLellan grew up at this address in Renfrew Heights, a neighbourhood bordered by East 22nd Avenue, Rupert Street, Grandview Highway and Boundary Road in Vancouver. In the late 1940s, a hillside was cleared off to make way for the Renfrew Heights Housing Project for War Veterans. The lives of the people in those bungalows are the basis for McLellan's first fiction collection, In the Quiet After Slaughter (Libros Libertad 2009), containing 17 stories, 13 of which first appeared in literary magazines. The collection was a 2009 ReLit Award finalist.

"At the conclusion of the Second World War," he recalls, "Canadian combatants returning from Europe exacerbated an already-chronic housing shortage. In Vancouver, veterans and their families were billeted in downtown hotels. Hallways served as playgrounds, lobbies as nurseries. Indignant returnees halted traffic with their chagrin, prompting authorities to borrow an untested solution from the United States: public housing.

"In a single summer a forested hillside on the city's eastern periphery was cleared and the first of hundreds of look-alike bungalows constructed. The newspaper ran a photo of a bulldozer felling the first sacrificial tree. Demand for the rental units outstripped supply, so the coveted homes were let to those who'd endured considerable frontline action. Successful candidates were also required to have at least two children, encouraging action amongst hopeful applicants of a more welcome sort. An appropriate moniker for the residential development suggested itself nine months hence: Diaper Hill.

"Streets were named after memorable battle sites from both world wars, villages such as Normandy, Vimy, Dieppe, Anzio, Mons....In the first few years of the nascent neighbourhood the homes were rentals, with Catholics unnecessarily assigned to one side of the street, Protestants the other, echoing a stubborn, Old Country division. In time the properties were offered to vets who could cobble together a down payment. When prices rose, some sold their homes to the non-veteran public, dramatically transforming the cultural hue of the neighbourhood. I recall my father grimly eyeballing a newly arriving homeowner, an Italian. (Italy, remember, had been on the losing side of the war.) 'Ten years ago,' said my father, who had served in the Navy, 'they would have paid me to shoot him.' Instead, the two became good friends, my father doing Cosmo's taxes at our kitchen table, Cosmo supplying the homemade vino. I don't think there are many countries where such a reconciliation would have been possible.

"Each narrow corridor had several homes fitted with a wheelchair ramp extending to the sidewalk - at least to where the sidewalks were meant to be. (Homes tenanted by the shell-shocked, of which there were many, featured no telling characteristic.) Until financing for paving was secured, rainfall turned roadway and footpath into muddy fjords. Postal workers refused delivery, a slight later avenged by a parliament of snappy canines. By the new millennium few of the bungalows or their original inhabitants stood erect.

"Folks began referring to the development as Widows' Hill. To many who live there these days, the Renfrew Heights Housing Project for War Veterans, where many of the following fictions are set, is remembered, if at all, as a quaint municipal curiosity. To original residents, however, the Project was more than a home. This modest neighbourhood was a sanctuary, a place to reassemble war-weary lives in the quiet years after slaughter."

Don McLellan's second story collection, Brunch with the Jackals (Thistledown $18.95), echoes the "hard-boiled" style of Raymond Chandler and Mickey Spillane. Urban life is fraught with danger. Four junkies anxiously await a drug dealer. A gang leader copes with racism, greed and mutiny. A terminally ill man plots his own demise. Independent reviewer and Vancouver historian Sheryl Salloum has responded, "Brunch with the Jackals takes readers to uncomfortable places in foreign locales and the east side of Vancouver. These include the 'troubles' in Ireland, a war-ravaged Asian country, and migrants' experiences with human smugglers and an impassive Canadian bureaucratic system; as well as the unforgiving realms of gangs, junkies, murderers, and terminal illness. Themes and images of abandonment, betrayal, brutality, greed, hopelessness, mistrust, misogyny, racism, vengeance, and violence fill the pages. McLellan skilfully uses black humour, intriguing juxtapositions, irony, plot twists, stories within stories, unusual similes, and sometimes shockingly frank descriptions and language to highlight life's starker aspects. His stories are profoundly dark, spare, unforgettable, and finely honed. As with a good mystery or psychological thriller, after the last page the reader wishes for more of this bold author's neo-noir stories. Brunch with the Jackals is an arresting second book from an intriguing literary voice that highlights emotional, physical, and psychological shadows."

Don McLellan has worked as a journalist in Canada, South Korea, and Hong Kong. He has been nominated, listed, a finalist, or honourably mentioned for a Western Canada Magazine Award, a Tabbies International Editorial Award, the Kenneth R. Wilson Memorial (business writing) Award, the Commonwealth Short Story Prize (twice), a ReLit Award, the Pushcart Prize and the Whistler Independent Book Award.

After receiving award nominations for his first two books of short stories, retired journalist, Don McLellan has released his third collection, Ouch: 20 Stories (Page Count Press $20), equally worthy of notice. Each story encapsulates a slice of the lives of characters sparely drawn who are usually stuck in troubling if not downright perilous situations. Like the fireman and his wife, a nurse, who are about to have a child while living in a neighbourhood terrorized by homeless people in The Unravelling.

McLellan injects humour, mostly black, which enlivens his dark tales. He also adds sharp perceptions of contemporary issues, such as this backdrop in Neighbours, about a diverse collection of people who come together to help a homeless woman (the homeless are a major feature in McLellan's book).

Also included in this scenario is a family from Hong Kong, successful enough that the mother can stay home to raise their kids. And there is also Augie, an Indigenous, sometime longshoreman who lives in a basement rental. "He's a good man," writes McLellan, adding "he's always happy to lend a hand to his non-Native neighbours, whom he only half-jokingly refers to as 'tourists who've outstayed their visas.'"