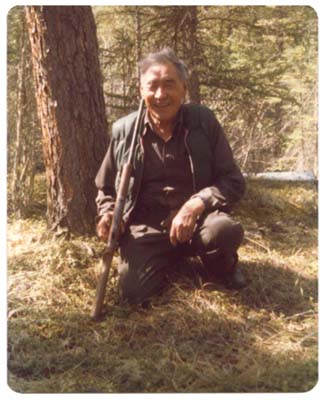 According to the Dene Nation, Trindell was an essential witness to history:

"Two treaties were signed with the Canadian government, Treaty #8 and Treaty #11. These were peace treaties when non-Dene were moving and settling in what was the Northwest Territories — encompassing Saskatchewan, Alberta, British Columbia and present day Northwest Territories. Changes were eminent for our Dene homeland as fur traders, explorers, surveyors, and missionaries kept coming to deal with the business of their trade. A treaty party arrived to negotiate Treaty #8 on July 25, 1900 on the south shores of Tutcho (Great Slave Lake) at a place called Fort Resolution, today this community is known as Deninu Kue. In meeting with the Dene, the chiefs understood that Treaty #8 was a document of protection, it would be signed as an agreement for the Dene to continue maintaining occupancy and use of all their traditional lands and waterways, a guarantee of control of traditional homeland.

"As time progressed, oil was discovered in 1920, near the community of Tulita, which means “Where Two Rivers Meet” in the Sahtu Dene language; it is located on the south shore of the Bear River. Tulita was formerly called Fort Norman. Oil drilling equipment and workers began drilling for the valuable resource at Norman Wells, named because of its close proximity to Tulita (Fort Norman). As a result of the value of oil, the Crown gave high priority to making treaty with the Dene Sahtu and on July 21, 1921 Treaty #11 was signed in Tulita. A Metis by the name of Ted Trindell who was from Liidli Koe (Fort Simpson) was a witness to the negotiations and signing of Treaty #11, said: “They talked about the land, and the Indians were scared that by taking treaty they would lose all their rights, but the Indians were told they would not. But if they were taking treaty they would still be free to roam and hunt as usual. No interference.”

Born in Bellechasse (Saint-Michel), Canada, Jean-M. Morisset was a Canadian Coast Guard sailor on ice-breakers in the Arctic and he also surveyed the tundra and boreal forests extensively in the 1960s while working for a variety of aboriginal people's associations. He was appointed to the Alaska Highway Pipeline Enquiry in 1977 and he has also studied hydro-electric power projects in northern Quebec and the Mackenzie River delta. He has travelled extensively throughout the Americas and obtained his Master's degree in geography from Laval University. He earned his Ph.D from University of Liverpool for his study of the Titicaca region of Peru. As an academic he has taught at University of Victoria, Laval University, University of Montreal and University of Quebec. With specific research interest in Brazil and Guyana, he has also studied relations between Haiti and Quebec. Morriset was invited to attended the investiture of Haiti's President Aristide as a result. He is a member of the Association Brésilienne de littérature comparée (Rio), the Groupe de recherche sur la littérature de voyage (Paris), the Institut International de Géopoétique (Trébeurden, France), the board of directors of the Cidihca (Montréal) and the co-founder of Portage - Institut de Géopoétique du Monde-Nouveau (Montréal/Port-au-Prince).