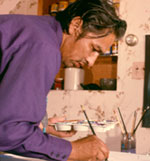 
Norval Morrisseau has been called the "Picasso of the North"; and the greatest painter that Canada has ever produced. Due to the Ojibway spirituality in his work, he is seldom considered as a British Columbian despite several decades of residence in the province.

Born March 14, or March 13, 1932, on the Sand Point Ojibwe Reserve, near Beardmore, Ontario, Morrisseau was the eldest of five boys born to Grace Theresa Potan Nanakonagos and Abel Morrisseau. Government documents listed his name as Jean-Baptiste Norman Henry Morrisseau. As the eldest son, in keeping with Anishnaabe tradition, he was raised by his grandparents on the Sand Point Reserve near Lake Nipigon. His grandmother Vernique Nanakonagos introduced him to Catholocism; his grandfather Moses 'Potan' Nanakonagos taught him Anishnaabe legends. He received his name Ahneesheenahpay, meaning Copper Thunderbird, after his mother took him to a Medicine Woman for treatment of a fever in 1950. Some elders argued he was not yet worthy of such a powerful name, but he recovered and was introduced to Ojibway shamanism by his grandfather.

Raised mainly by his grandparents, Morrisseau was sexually abused at a Roman Catholic boarding school and hospitalized with tuberculosis for a year in the mid-1950s at a Fort William sanitorium. While afflicted with TB, he began drawing and painting his visions on birch bark and paper bags. At the sanatorium he also met his future wife who was visiting her father David Kakegamic, also a patient. In the 1958 he sold some paintings to fellow painter and art collector Dr. Joseph Weinstein and his wife Esther in the northern mining town of Cochenour. In 1961 he met anthropologist Seleyn Dewdney, leading to collaborations for Legends of My People, The Great Ojibway (1965).

In the 1960s Morrisseau travelled to Aboriginal communities in Canada and northern Minnesota, gathering more knowledge from community elders, and strengthening himself as an artist and a shaman. Founder of the Woodland School or style of painting, also known as Legend Art or Medicine Art, Morrisseau is an astral traveller who paints his visions, depicting the stories and legends of the Ojibways that were previously transmitted orally. Morrisseau's paintings are typically signed "Copper Thunderbird"; using Cree syllabics taught to him by a Cree wife, Harriet Kakegamic.

In 1962, Toronto gallery owner Jack Pollock met Morrisseau while travelling through northern Ontario and teaching a painting workshop at Beardmore. Soon afterwards Pollock held Morrisseau's first one-man show at is Toronto gallery. All his paintings sold the first day. With Carl Ray, a Cree apprentice and friend from Sandy Lake, Morrisseau painted the large mural for the Natives of Canada Pavilion at Expo '67 in Montreal. Almost killed in a Vancouver hotel fire in 1972, he recovered from burns on three-quarters of his body and claimed he had a vision of Jesus during the fire. He adopted Christian Fundamentalist beliefs that were reflected in his art. The following year he was arrested for drunk and disorderly conduct in Kenora, Ontario. In order to possibly benefit his health, authorities incarcerated Morrisseau for six months with access to an adjacent cell where he was encouraged to paint. In 1973 Morrisseau was recruited by Daphne Odjig to join her Professional Naive Artists Incorporated along with five other First Nations artists.

Morrisseau quit drinking 1976 after he was introduced to Eckankar religion by Jack Pollock's gallery assistant, Eva Quon. He claimed the Eckankar belief in the duality of body and soul helped him to understand his own shamanism.

A recipient of the Order of Canada in 1978 and an honorary doctorate from McMaster University in 1980, Morrisseau has had a profound influence on the work of Canadian Aboriginal artists such as Daphne Odjig, Jackson Beardy, Joshim Kakegamic, Goyce Kakegamic, Carl Ray and Roy Thomas. In 2000, Morrisseau was honoured at the En'owkin Centre in Penticton as "the bridge between traditional art and modern western painting."; He was also acknowledged as Grand Shaman of the Ojibway in 1986 and he received the highest honour fro the Assembly of First Nations in 1995, an eagle feather.

Estranged from his family, he has been a cocaine addict and an alcoholic for much of his life, living on the streets in Vancouver in the late 1980s and early 1990s until he moved to Nanaimo under the care of Gabor Vadas, a former street kid who met Morrisseau in Vancouver in 1987. The relationship of Vadas and Morrisseau is featured in a CBC Life & Times documentary, A Separate Reality: The Life and Times of Norval Morrisseau (2005). "Morrisseau was committed, from the very start, to preserving the stories and myths of his people,"; says writer/director Paul Carvalho. "He never wavered. As troubled as his life was, he also went through it with this incredible sense of mission.";

With the companionship of Gabor Vadas and his Michele, Morrisseau stopped drinking again in 1991 (and got a new set of teeth). He moved to a two-storey ocean-front studio on the Semiahmoo Reserve near White Rock in 1992 and suffered a minor stroke in 1994. He suffered another stroke in 1996, moved to Nanaimo in 1999 and has not painted since 2000. Afflicted with Parkinson's disease, he moved into the home of friends in Nanaimo in 2002, then transferred to Nanaimo nursing home in 2004, confined to a wheelchair.

The Bau-Xi Gallery in Vancouver had a solo exhibition of Morrisseau's work in 1974 and he was one of three Canadians invited to participate at the French Revolution bicentennial "Magicians of the Earth"; exhibition at the Pompideau Museum in Paris in 1989. Morrisseau was inducted in abstentia into Thunder Bay's Walk of Fame in 2004. The one-man retrospective, Norval Morrisseau--Shaman Artist, opened at National Gallery of Canada in 2006. Accompanied by a book-length catalogue of the same title, it became the first solo exhibition by a First Nations painter at the National Gallery.

As an author, Morrisseau provided illustrations for Windigo and Other Tales of the Ojibways (1969) but few books have been published due largely to difficulties negotiating business terms. Other Morrisseau titles are Legends of My People: The Great Ojibway (1965) and Travels to the House of Invention (1997). The latter was revised and reissued as Norval Morrisseau: Return to the House of Invention (2005). His former manager Jack Pollock co-edited The Art of Norval Morrisseau (1979) with Lister Sinclair.

The remarkable, tormented life of Morrisseau, the man generally regarded as the Father of Contemporary First Nations art, is worthy of an opera, so MÃ©tis playwright Marie Clements of Galiano Island has fashioned a multi-leveled stage play, Copper Thunderbird (Talonbooks $15.95) to explore his complexity.

Copper Thunderbird relates a Faustian tale of the world-revered artist who became a Grand Shaman within the realm of Ojibwa cosmology while succumbing to the effects of family abuse, alcoholism and extreme poverty-including wanderings on the streets of Vancouver's Downtown Eastside.

The result is a composite vision of a fractured life that ranges from the Fort William Sanitarium in 1956 (where he was treated for TB) to the Sandy Lake Reserve near Lake Nipigon in 1965 to the Kenora Jail in 1973 to the Ste. Rose Catholic Detoxification Centre in 1975 and to Los Angeles in 1987.

Halfway through the play, when the voice of the young Morrisseau regrets selling his paintings, a Gallery Room Chorus echoes the opinions of 'white' supporters and a Flooding Room Chorus represents the conflicting views of his Ojibwa community.

Clements depicts Morrisseau as an internally embattled visionary unable to come to grips with his overall character. Three Morrisseau characters - boy, young man and old man-hold lively debates over each development of his life, alternately defending and antagonizing one another and giving the impression that Morrisseau is passing his own judgments on himself.

In one rare moment, the Three Norvals speak as one, "I am Norval Morrisseau. I am an artist, a storyteller. I am a mystic. I am a very religious person. I am a free man, a force. I am humble. I am Jesus Christ. I am the Creator. I am an Indian and I will save myself.";