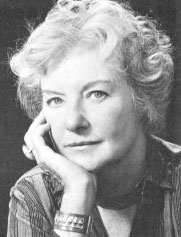 
Born in London, England, February 10, 1924, she spent her childhood in India until age eight, and immigrated to Canada in 1932. She attended Queen Margaret's School in Duncan, B.C., graduating in 1941. She received B.A. and M.A. degrees from UBC and her Ph.D. in English from the University of Kent, Canterbury, in 1972. She taught for 25 years at the university and college level and she wrote or edited 13 books under her maiden name. Her married name was Rona Jean Dexter. She was married to potter Walter Dexter with whom she co-edited The Art of Earth (Sono Nis). For about 30 years they lived in an oceanside home in Metchosin. She had been married once before, while raising her children. Her one-act play, Blue Duck's Feather and Eagledown was performed in the 1958 Centennial celebrations of British Columbia and she was also the scriptwriter for a film on Romanticism called Harmonie in 1980. She died at age 79 on July 9, 2003.

In her travel memoir Journey Back to Peshawar (Sono Nis, 1993) Rona Murray recalled her early years in the India of the British Raj and her return 50 years later to a different India of the 1980s. Her extensive travels, plotted on a map, took her to New Delhi, Calcutta, Madras and smaller cities, as well as Peshawar, now in Pakistan, where she had spent two years as a small child. "Here, so remote from my later life, the pain of childhood was finally confronted and quietly laid to rest; pain engendered less by an individual than by a tradition." In her Memory of Elsewhere, Rona Murray searched for meaning in the aftermath of a near-fatal car accident five years earlier. She recounted out-of-body experiences and the bliss she encountered during her recovery, exploring consciousness and the richness of her life. It is a journey of discovery through various religions, philosophers and writers as she grapples with how her life changed after the trauma of the accident; a trauma she called a "swoosh of ecstasy". She died of a heart attack at her new home near the University of Victoria on July 9, 2003. She was remembered at a memorial service as someone with a gift for friendship, someone who loved entertaining, and someone who was generous with her time.