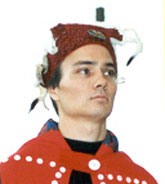 
A descendant of Kwakiutl carvers Ellen Neel and Mungo Martin, David Neel studied photography in the United States and returned to produce the text and photographs for Our Chiefs and Elders: Words and Photographs of Native Leaders (1992), followed by The Great Canoes (1995). His illustrations have also appeared in several other books, including Ellen White's Kwulasulwut: Stories from the Coast Salish (1981).

According to Elijah Harper in Neel's Our Chiefs and Elders, "public images of Aboriginal people have been almost completely negative," ever since the arrival of Columbus in 1492. Neel agrees. "For well over a hundred years, we have learned to accept a false image of the people of the First Nations," he says. "The tool used to build this image has been the camera."

Influenced by photographers such as Cartier Bresson, Cornell Capa and W. Eugene Smith, David Neel was critical of the photos by pioneer photograher, Edward S. Curtis whose massive series The North American Indian greatly influenced North American attitudes about Aboriginals. "When viewed as art," Neel concedes, "they are quite wonderful. However, they are very problematic when one starts to examine them for authenticity, integrity and general content."

Curtis frequently used wigs on his subjects and dressed his subjects in clothing that belonged to other tribal groups. "This visual cocktail is comparable to photographing a French woman in a traditional Italian dress and offering this as an image of an 'authentic' European," says Neel. Curtis' pan-Indian approach, born of a colonial mentality and feelings of white cultural superiority, has been endemic in Hollywood films. "When depicted in popular culture," says Neel, "we are either a 'noble savage' or a degraded heathen."

Recognizing that we all live in a time of the created image and "if you do not create your own, someone will create it for you," Neel set out to photograph and interview elders, many of whom were the last witnesses to Aboriginal life before cars and gas-operated boats. In 60 duotone photos he provided dual depictions of his subjects, in both traditional dress and everyday dress. They included Harry Assu, Ruby Dunstan, Leonard George, Chief Joe Mathias, Bill Reid, Chief Saul Terry and Chief Bill Wilson.

"This body of work is intended to be the antithesis of the "vanishing race," Neel wrote. "This is a statement of the surviving race."

David Neel was born in Vancouver in 1960 to Karen Clemenson, a non-Aboriginal, and David Neel, eldest son of Ellen Neel, one the few female carvers on the Northwest Coast. His Aboriginal name, Tla'lala'wis, meaning "a meeting of whales coming together," was inherited from his father, who received it from his uncle, Mungo Martin. Mainly raised in Alberta, David Neel returned to British Columbia and opened a commercial studio in Vancouver in 1987.

Rather than taking a directorial approach, he now approaches each photo session as a sharing experience, acutely aware that photographs can outlive photographers and their subjects. "Today we are witnessing the rebirth of our cultures on the Northwest Coast," he says. "We can see the end of a period of oppression, and we can see a time of hope for our grandchildren. We are entering into a time in which Aboriginal people have a place in contemporary society. The Native has learned much; it is now time that society learn from the Native."

I first met David Neel in 1987. I was an editor at Kahtou News, a provincial First Nations publication, when Neel visited the office one day. Upon learning he was a news magazine photographer, we became friends. I soon discovered he was learning Northwest Coast carving with Beau Dick and Wayne Alfred, two artists who were already established.

Over the next 30 years, I went through several career changes but Neel stayed true to art. While he was living in the United States, Neel was first a photographer. His portraits for the Pequot Museum in Connecticut captured the tribe’s resilience and success in a modern world. This tribe was all but wiped out until they won recognition of their treaty and Aboriginal rights. As part of their treaty with the U.S. government, they were able to build and operate the Foxwoods Casino. It became the most successful Native American-owned casino in the U.S.

The Way Home is filled with portrait photography that conveys stories that cannot be told by words alone. In this image-filled memoir we are also invited into Neel’s creative journey through his descriptions and photos of his own carved masks and his precious metal jewelry. Neel literally carves deeply into the materials of wood and metal as a true master of Kwakwaka’wakw art. As a result, his work has a sculptural look, the sign of a good carver.

David Neel has also been a participant in the renewed impetus for Indigenous canoe journeys.
During the 1989 Washington State Centennial Commemorations, First Nations were invited to carve and paddle to Seattle, Washington. The event would prove to be a spark for the revival of Northwest Coast canoe culture.

During that seminal event, Frank Brown, from Bella Bella, invited communities to visit Bella Bella on the central coast of B.C. for a canoe festival, which is a celebration of culture.
Having joined a team from Campbell River, David Neel participated in that festival which inspired a broader rekindling of cultural practices. Neel was caught up in the excitement and began thinking about the creation of a canoe of his own.

Upon returning to Campbell River, where Neel was living at the time, he located and carved a massive red cedar log. One of Neel’s many qualities is to be humble enough “to go to the one who knows.” He visited the great Haida artist Bill Reid to seek advice and Reid was generous in sharing his knowledge.

It is interesting how talent and hard work take you on journeys beyond your own dreams. For instance, not only did the canoe journey to Bella Bella lead Neel to carve his own canoe; it also led him to Venice, Italy, where he was invited to take part in the 48th Venice Biennale in 1999.

In Venice, Neel exhibited his canoe by paddling it around the city. With its canals providing the highways for city life, Venice was the perfect venue to display the canoe and to see the city in its entire splendor. Fortunately for me, I was included in the crew for the Venice trip.
In a water taxi it is difficult to appreciate the architecture and art on the walls of the buildings due to the speed of the boats, but in Neel’s canoe we could leisurely stop and marvel at the sights. I have been on ten canoe journeys and Neel’s canoe is one of the best of the carved canoes I’ve experienced.

In addition to his canoe, David Neel showed many of his carved masks in Venice, the “City of Masks.” It was a mask that brought Neel home to Vancouver. While he was starting out as a photographer in the U.S., he attended an art show in Texas and was startled by one particular exhibit.

“I came to a case that contained a Northwest Coast Indigenous mask,” he writes, “the first I’d seen other than in photographs… I could feel my connection to that mask as though it had an energy that made me need to know more – what it represented, where it came from, and who had carved it.”

It turned out there was indeed a deep connection to the person who had carved the mask. It had been made by Neel’s great-great grandfather, Charlie James. The experience lit a path for Neel back to his homeland.

Inspired by the creativity of his famous Indigenous artist ancestors, Neel switched from photography to carving in red cedar, silver and gold. While creating within the artistic style of his ancestors, he has also continued their tradition of following modern interpretations—in other words, adding modern responses to contemporary issues. 9780774890410

BC BookWorld’s Indigenous Editor Latash-Maurice Nahanee is a member of the Squamish Nation. He has a bachelor of arts degree (Simon Fraser University).