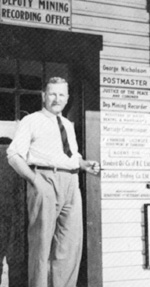 
LITERARY LOCATION: Zeballos, west coast of Vancouver Island, at the head of Zeballos Inlet, named by Captain Alejandro Malaspina in 1792 after one of his lieutenants, Ciriaco Cevallos. Directons: Follow Highway 19 on northern Vancouver Island; take the turnoff just north of Woss; proceed on a 40 km gravel logging road.

The so-called "Father of Zeballos," George Nicholson, was a postmaster, justice of the peace and bootlegger who also wrote one of the quintessential self-published B.C. books, Vancouver Island's West Coast, 1762-1962 (1962), reprinted by Morriss Printing at least twelve times. "George Nicholson was not only a West Coast pioneer," says historian T.W. Paterson, "but a publishing pioneer."

Some of the province's most integral book publishing imprints arose from self-publishing and many of the best books continue to be self-published, dating back to the early 1960s when George Nicholson produced his first and only book.

New Zealand-born George Salier Willis Nicholson travelled to Australia as a boy where he worked on Australian sheep stations and banana trading boats, visiting Fiji, Tonga and Samoa, before arriving in Victoria in 1911 where he found a job as secretary of the Camosun Club.

Upon the arrival of WWI, he joined the 67th Western Scots, a Victoria unit. While in the army he attained the rank of major and was awarded the Military Cross after fighting at Vimy Ridge and being wounded at Arras.

Between the wars, Nicholson worked on a 50-foot boat, the Miowera, when it was involved in fishing, freighting and rum-running to the then dry United States. He rejoined the army during WWII, but was invalided back home.

Nicholson went through jobs running hotels in Port Renfrew and Clayoquot, as well as the Sooke Harbour Hotel, which he operated for five years.

At Zeballos during the so-called gold rush period, he had a sign outside his Deputy Mining Recorder's Office listing his adjunct professions: "George Nicholson, Postmaster; Justice of the Peace; Registrar of Births, Deaths and Marriages; Marriage Commissioner; Air Harbour Licensee and Wharfinger; Agent for Standard Oil and Zeballos Trading Co. Ltd."

Nicholson lived for more than 35 years on the West Coast of Vancouver Island. A contributor of West Coast adventure stories to the Colonist's Islander magazine, Nicholson was made honorary member of the B.C. Historical Association. He was also a member of the Thermopylae Club.

In those days, there were no commercial book publishing houses, so he went ahead on his own steam, producing Vancouver Island's West Coast, largely a compilation of his freelance contributions to the Islander magazine.

When Nicholson died at age 92 at James Bay Lodge in Victoria on January 11, 1980, Alec Merriman in the Colonist described him as "the authority on anything pertaining to Vancouver Island's West Coast."

George Nicholson is mostly forgotten now. But he started B.C.'s self-publishing tradition of the modern era, leading to the likes of fiction author and editor Ernest Hekkanen in Nelson, and the Blackfoot historian and train expert Adolf Hungry Wolf of Skookumchuck -- and at least a thousand others.

Others have written memoirs and stories pertaining to Zeballos, including Jack Crosson and Eleanor Hancock.

Today, almost 20 years after the computer revolutionized printing and publishing, it has become commonplace -- almost de rigeur -- to publish one's own books.

Forty years ago, however, this was all but unheard-of, although the nasty term 'vanity press' had long been around. When it was (rarely) practiced, self-publishing was almost always done by default after a manuscript had been bounced from one trade publisher to another until its author, refusing to consign his/her opus to a bottom drawer, commissioned a printer.

So it had been for Maj. George Nicholson, a feisty, cigar-smoking Scotsman who lived in Victoria when I knew him. After several rebuffs from the few established publishing houses in Canada (all of them in the east, they'd never heard of Vancouver Island, he often joked), he refused to stuff his manuscript in a drawer. He took his fat wad of typed sheets to a printer, in this case Morriss Printing Ltd. which, inspired by his success with 'Vancouver Island's West Coast, 1762-1962,' later founded its own publishing house, Sono Nis Press.

Based upon his 35 years in the gold rush town of Zeballos, Nicholson had written a series of articles over several years for the weekend magazine section of The Daily Colonist. These became the nucleus of his hardcover book which, I have heard, ultimately went through 13 printings and would, in my opinion, be in print today if it were updated.

But to get back to George Nicholson, the 70-ish man with the close-cropped silver hair who always reeked of cigar smoke and who saw the world through heavy-rimmed glasses. (At least he did in his later years when I, as Colonist copy boy and aspiring author, knew him.) George -- despite the half century that separated us, I could address him by his first name, which pleased me -- could be gruff (perhaps the result of his army service during the First World War) and he certainly could be stubborn, as demonstrated by his going to press on his own rather than abandoning his dream for publication.

It was so obvious to all that he believed in himself and his book. And why not? What a career he'd had! A great photo in his book shows him, middle-aged and standing before his office and a multiple signboard that listed his official duties and offices in Zeballos in the 1930s and '40s. Let's see, he was postmaster, justice of the peace, deputy mining recorder, registrar of births, deaths and marriages, marriage commissioner, air and harbour licensee (for the Dept. of Transport), representative for the Dept. of Veterans Affairs and agent for the Standard Oil Co. of B.C. Ltd. and Zeballos Trading Co. Ltd.

Not denoted were his unofficial capacities as human observer, historian and, it has been alleged, bootlegger.

My relationship with George Nicholson was not such that I recall ever hearing him admit to his bootlegging sideline, but virtually everyone I ever met who'd known him on the West Coast claimed (sometimes with broad grins, sometimes with a wink -- but always with a note of admiration in their voices) that it was so and that he had done well at it. Certainly George came across, even to an unworldly youth, as a man who had marched to his own drummer and an extracurricular enterprise such as selling booze under the counter fitted his character to a T.

He was no housekeeper, I recall, at least not in his study, a small, cluttered room in the front of his house where his manuscript, patiently crafted over many years and typed on cheap yellow newsprint, resided in a battered open box. Generously cat-tracked with his penned revisions and the proofreadings of John Shaw, friend and editor of 'The Islander,' the Colonist's popular Sunday magazine, it showed the wear and tear of its travels when I first saw it, likely in 1961, a year before he went to press.

I was on duty the night he arrived in the Colonist's editorial room, a heavy pile of freshly-printed books under his arm. Not unreasonably, considering his financial gamble, they weren't for giving away, but for sale. I was one of the first to buy an autographed copy. It cost me $15 -- half a week's pay! The fact that I was among his first customers can be taken as a measure of my respect for this man who had worked so long and so hard to record two centuries of the history of the Island's west coast, with its Spanish and English explorers, its shipwrecks and its heroic pioneers who, until George Nicholson took to an old typewriter (likely with just two fingers), were all but unsung.

Today we take provincial and national history almost for granted. New books come out almost daily. In 1962, the entire 'Canadiana' section of a downtown Victoria bookstore consisted of a single shelf not more than two feet long! Check out your favourite bookstore today to see how far we've come.

George Nicholson was not only a West Coast pioneer, but a publishing pioneer. If you can find a copy of his book through a used or antiquarian book dealer, do so and enjoy this classic work which, like its subjects, was a pioneer in the publishing field. But don't get too excited if your copy is autographed. George told me that he signed every single copy. If you should find one that he missed--that'll be a real collector's item.