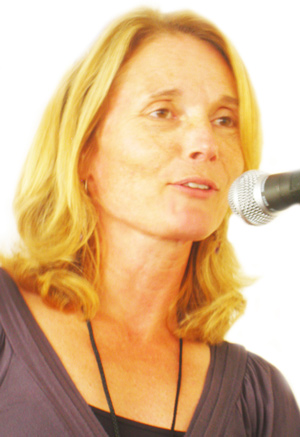 
In 2012, five of thirty possible nominations for English language Governor General's Awards went to B.C. authors but Susin Fernlund-Nielsen was the lone winner, receiving the Governor General's Award for Children's Literature in English for The Reluctant Journal of Henry K. Larsen (Tundra Books), an engaging and frequently humourous story that addresses the effects of bullying in a realistic, compelling and compassionate way, exemplifying the adage, "There are two sides to every story.";

Susin Nielsen was later shortlisted for the TD Canadian Children's Literature Award with the same book.

As part of a catering crew, Susin Nielsen-Fernlund of Vancouver got her big television break in the off-camera cafeteria for the program Degrassi Junior High. "They hated the food-but they loved my writing."; After scripting 16 episodes of Degrassi and tons of TV writing credits later, plus a Gemini Award, she realized her ambition to publish a children's book after her son Oskar was born in 1996. "All the television work has been wonderful,"; she says, "but a book dedicated to my son Oskar is a lot closer to my heart. It's so tangible. And his name is in every copy. He thinks that's pretty neat!";

Oskar's adventures with his imaginary dog Spoofus sparked her imagination to write Hank and Fergus (Orca 2003 $19.95), illustrated by Louise-Andree Laliberte.

Her follow-up, Mormor Moves In (Orca 2004 $19.95). is about a Swedish grandmother who comes to live in the home of a child named Astrid. At first, the child isn't fond of her grieving and grumpy relative, but the grandmother becomes essential when Astrid loses her beloved stuffed animal Bjorn.

Illustrated by Geneviève Côté, The Magic Beads is about a seven-year-old who is nervous about her first day at school. Lillian and her mom have just moved away from Lillian's abusive father. Because they're living in a family shelter, having left most of their possessions, she is worried about bringing something for show-'n'-tell at the end of the week. She has to 'invent' something, making use of her imagination, starting with a seemingly ordinary string of beads.

Susin Fernlund-Nielsen subsequently reduced her pen name to Susin Nielsen. She has since adapted the novels of Susan Juby for the CTV television series, Alice, I Think, and contributed scripts to numerous made-in-Canada series such as Arctic Air.

Her willingness to write for sophisticated younger readers in Word Nerd led her to write The Journal of Henry K. Larsen, also pitched to intelligent, advanced readers. It was a finalist for the Sheila A. Egoff Children's Literature Prize awarded to the best non-illustrated book written for children by a B.C. author.

We Are All Made of Molecules (Tundra $19.99) tells the story of two unlikely teenagers being thrust together when their parents combine households. Thirteen-year-old Stewart Inkster is the proverbial nerd: head of his class but socially awkward. Fourteen-year-old Ashley Anderson is the "it" girl of her grade nine class. Ashley is mortified and hasn't even informed people her parents are divorced because they might learn her birth father is gay; Stewart tries to make the best of the situation. The story of their overlapping journeys tackles issues such as bullying, bigotry and tolerance, as well as the true nature of friendship and what it means to be a family. The book was shortlisted for a Sheila A. Egoff children's literature prize and won the 2016 Schwartz Children's Book Award for Young Adult / Middle Readers as selected by Ontario school children. The Ruth Schwartz Children's Book Awards were established in 1976 by Sylvia Schwartz in memory of her sister, Ruth, a respected Toronto bookseller. In 2004, the family renamed the awards to honour both sisters. "I wish I'd known the Schwartz sisters," said Nielsen, "who did much for Canadian children's literature. And the fact that the winners are chosen by student juries makes it truly special. Knowing that the book is connecting with my intended audience is the ultimate prize."; [review below]

Articles: 1 Article for this author
We Are All Made of Molecules
Review

The newly "blended"; family at the heart of Susin Nielsen's We Are All Made of Molecules (Tundra 2015) might better be described as "coarsely chopped"; rather than blended.

Stewart and Ashley are two completely different teenagers, with different outlooks, forced to share the same roof by their freshly united parents.

Stewart Inkster is a gifted, kind, but socially inept 13-year-old. He and his dad Leonard have struggled with grief since Stewart's mom died of cancer. Brainy Stewart, who measures his days and moods in mathematical terms, describes his former family unit as an "equilateral triangle"; that collapsed when his mom died.

Stewart's dad Leonard has recently found love with his longtime friend and colleague Caroline Anderson, mom to 14-year-old Ashley, a selfish queen bee who treats others badly and constantly misuses words. While not book smart, she is a genius when it comes to her high school's social ladder. Ashley sits at the top rung and will do whatever it takes to remain there.

Leonard and Caroline have decided to live together, so Stewart and his father make the move from their North Vancouver home to Caroline's place in East Vancouver. Complicating matters is the fact Ashley's dad (and Caroline's ex-husband) Phil lives in the property's laneway home. Despite a seemingly happy marriage, Caroline and Phil divorced when Phil acknowledged that he was gay.

Ashley hasn't forgiven her father for breaking their family apart and she questions whether or not he ever really loved her or her mom. She can't fully accept her dad's homosexuality and, worried her friends won't be accepting either, hides the real reason for her parents' divorce.

Nielsen simultaneously depicts the devastation and the "black hole of sadness"; that accompanies the loss of a loved one through Stewart's struggles to deal with his mother's death. He has a therapist on speed-dial and the companionship of his beloved cat Schrödinger.

Stewart is initially enthusiastic about gaining a sister, but when Ashley's nastiness surfaces he realizes his vision of the new family doesn't match the reality. Ashley resents having new people (and new belongings) in her home.

Things get worse when Stewart decides to go to Ashley's high school where his high IQ bumps him up into her grade. Ashley is devastated, certain that "nerd-bot"; Stewart will threaten her social status.

It isn't until popular new student Jared enters the picture that Ashley and Stewart start having to rely on each other. Jared has his bully-scope targeted on Stewart, and only Stewart's connection to Ashley keeps him at bay. Ashley has a crush on Jared, and Stewart is useful first as a go-between for their messages, then as a decoy for Jared's after-school visits.

As Stewart and Ashley find out more about who Jared really is, there are ugly examples of bullying, harassment and assault. But there are also lovely examples of the good in people.

Ashley discovers that the quality of a person goes far deeper than their appearance. Stewart finds that taking risks, while scary, can be life-changing. The two also learn about bravery, compromise and standing up for others.

We Are All Made of Molecules is convincingly told from the alternating perspectives of Stewart and Ashley, with equal skill. While Nielsen's book is geared for the young adult market, there is plenty to keep adult readers engaged. It's a story told with humour, intelligence and sensitivity, based on characters that could easily be the teens next door.

Ashley and Stewart's struggles and achievements remind us that no matter how different we may seem, at the core we are all interconnected. Because after all, we are all made of molecules.

Denise Reid is a graduate of Douglas College.