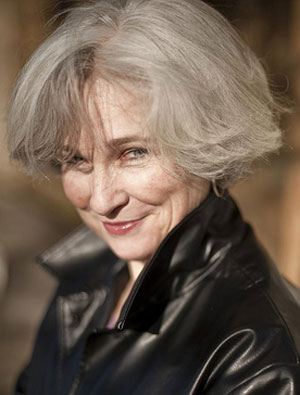 
Lois Simmie's stay at the ivy-covered Sylvia Hotel at English Bay in Vancouver, and her meeting with the hotel's large, gray resident cat "who seemed to own the place", resulted in her children's story Mister Got To Go (Red Deer College Press, 1995) with illustrations by Cynthia Nugent of Vancouver. Nugent graduated from the University of Alberta in 1979 and has since had several one-person exhibitions of her art.

Cynthia Nugent's first young adult novel Francesca and the Magic Bike is a fanciful story about a ten-year-old girl who is sent to live with her bumbling father Ron Rudderless following the death of her mother. A kindly old neighbour sends Frankie on a quest with a magic bike and a dog named Dan to obtain a family heirloom that can favourably alter Frankie's domestic circumstances enough to satisfy the concerns of Social Services.

An impulsive dog and a near-sighted dog are the odd couple of buddies in Cynthia Nugent's Fred and Pete at the Beach (Orca $19.95). Left at home because they misbehaved, the canines want to accompany their human Ron to the beach, so Pete persuades his reluctant pal Fred to sneak onto a Canada Post truck, then a baby cart, then a bus. It all turns out swimmingly, and Ron shares his sandwiches and blanket. A frolicsome tale inspired by Nugent's Yorkshire terrier Emma.

Nugent won a Chocolate Lily Award for I Want to Go to the Moon (Simply Read 2012), a picture book based on a song by singer/songwriter Tom Saunders. "I met Tom at the Vancouver Ukulele Circle and instantly became a big fan of his performances. Later, I discovered that he co-wrote all the theme music for the television series, Robson Arms. When Tom gave me a CD of children's music that he recorded I couldn't believe my ears. This was tiptop Canadian children's music. I asked him if I could do some sketches and pitch one of the songs as the basis for a picture book. Simply Read agreed to publish it."

In 2017 Cynthia Nugent was part of a team that made a storytelling "app" for The King's Ears, a story narrated by Monty Python's Terry Jones. This story is based on Katarina Jovanovic's original text for The King Has Goat Ears (Tradewind 2008), winner of the Christie Harris Illustrated Children's Literature Prize in 2009, illustrated by Philippe Béha.

Welcome to Cantilever, a fictional town somewhere in Canada. The Beatles have recently released Love Me Do and it costs $3.46 to place a personal ad in the local paper.

Spunky protagonist, Katherine?known to everyone as Kiddo?is going to tell you, confidentially, nearly everything there is to know about herself as a grade four student.
Ma has a star-gazing club and works as a manager at the Sally Ann [Salvation Army Thrift Store]. Ma, aka Connie, has studied the history of bingo and collects bingo paraphernalia.
Pop makes welded metal sculptures when he?s not coddling his beloved 1941 Studebaker. ?Pop [Fred] was always looking for Stupidbaker parts,? Kiddo tells us.

For the most dramatic storyline in Cynthia Nugent?s Kiddo, Kiddo and her Chinese Canadian pal Winston, intrepid on their bicycles, help the police catch a thief who takes advantage of Kiddo?s innocence to steal precious Studebaker parts from her father?s vintage car.
The Viet Nam war might have been ragin?, but Kiddo?s adventures somewhere in Western Canada remained tame?charmingly ordinary. If you like the kind of plots that made The Beachcombers our province?s greatest export prior to Greenpeace and after the Bannister-Landy race, Kiddo is a high-grade retrograde fare, when princess phones were the rage, and the internet was undreamed-of.

Kiddo?s thirteen-year-old sister Pat wants a boyfriend?and gets one. Kiddo wins a contest at the opening of a new gardening store and the prize is a shed. Her father refurbishes it for stargazing. How can anyone not pull for a heroine who loves entering contests, collecting coupons and going to the library?
Even though she?s a rotten speller, Kiddo desperately wants to be named the next Junior Journalist for the local Town Crier newspaper. Her efforts to distinguish herself are frustrated at nearly every turn, but Kiddo is resolute to a fault, even if it means irritating others. It would be divine to replace her condescending full-of-himself Junior Journalist rival, Jeremy ?Germ? Marroon.

Kiddo is never deterred. When her sympathetic mother makes her water the garden or take the dog for walks as punishment, she accepts she deserves to pay a price for her recklessness, but her resolve is never diminished.

Kkiddo is not overtly identified as children?s literature because there is an authenticity to the details that makes Kiddo double as an investigation into a Sixties childhood as much as it?s a beguiling exploration of innocence. Who were Little Lulu, Archie, Nancy, Peanuts, Dick Tracy, Blondie, Marmaduke, Popeye and Dennis the Menace? What were comic strips? An adult co-reading Kiddo with a child might be the optimal approach.

This is the boldness of Cynthia Nugent?s retrospective experiment. Not everybody is going to like it or even understand it, because it includes lingo like ?darn tootin.? Well, tough titty, as they used to say back when children wandered their neighborhoods for hours, unsupervised, trusted. Kiddo presents backwards as forwards, as only sophisticated literature can.

Kiddo arose organically from a few scribbled passages that Nugent wrote in the Kerrisdale library one day, while she was killing time before an appointment. Suddenly she found herself describing an energetic child who slid on her socks into the kitchen.

?You?re looking as zippy as a bumblebee, Kiddo,? her mother says.

?Darn tootin? I?m zippy,? replied Kiddo. ?Guess what? The exhibition?s on! So, what about tonight??

Her mother balks at first, but then Kiddo convinces her mother to go to the exhibition (which seems very much like the PNE) because she has a coupon.

And off Nugent went, trusting her Proustian instincts, not knowing what was supposed to come next. She had no plans or ideas.

?Words popped out like Ma and darn tootin?,? she recalls, ?and toot sweet (for tout de suite). The Warbles also say horse doovers (for hors d?oeuvres).

?Thinking about it now, the words and the mispronouncing probably came from my mother who liked to camp it up. I don?t have any children, so my own childhood is the only one I know firsthand. My decision to fix on a time period didn?t come until I was well into the novel.
?My own childhood was miserable, and I only found refuge in books, the public library and school,? Nugent says, ?But that day in the Kerrisdale library, a fragment of a comedic world came to me and I just kept expanding it.? 9781896580661