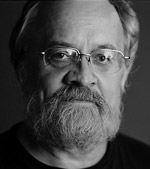 
Stephen Osborne was born in Pangnirtung on Baffin Island in 1947 and grew up in Edmonton, Kamloops and Vancouver as the son of a doctor. Co-founder of Pulp Press in 1971, he is a writer, book publisher, editor, photographer (usually under the one-word moniker Mandelbrot) and publishing consultant who became the founding editor and publisher of Geist magazine in 1990. Osborne oversaw and managed Geist with his partner Mary Schendlinger until 2015 when Osborne gave way to publisher and editor-in-chief Michal Kozlowski who first worked at Geist in 2006. Marketed with copious emails, Geist could boast having published 1500 Canadian writers and artists over 25 year, and having won some two dozen awards, including (three times) Magazine of the Year for Western Canada. Ardently self-promotional, Geist boasted it had grown into "the largest-circulation literary periodical in Canada's history"--as long as one discounts B.C. BookWorld.

Illustrated by his brother J.T. Osborne, his Social Credit for Beginners is a history of the Social Credit movement from 1917 in England to the government of Bill Vander Zalm. With Mary Schendlinger, his partner, he has edited a pocket-sized bestseller, Quotations of Chairman Zalm, and they co-edit the copy in Geist magazine. Osborne has also been a University of Victoria instructor and an SFU lecturer. His self-published non-fiction collection is Ice and Fire: Dispatches from the New World (Arsenal Pulp, 1998).

Stephen Osborne received the inaugural City of Vancouver Arts Award in the field of writing and publishing, as announced by Vancouver Mayor Larry Campbell. Also, in February of 2004, it was announced that Osborne was one of 12 winners of the 2004 CBC Literary Awards in the category of Travel Writing, English, for his story "Girl Afraid of Haystacks." Winners received $6,000 and had their works published in Air Canada's enRoute magazine and recorded for broadcast on CBC. In 2006, Osborne was named as a recipient of the Western Magazine Awards Lifetime Achievement Award. He previously won Western Magazine Awards for Best Column in 1996, 2000 and 2002. In 2007 he contributed to Brian Howell's photo study of people who impersonate celebrities, Fame Us: The Culture of Celebrity (Arsenal Pulp).

Critic Robert Fulford once described Osborne as "an unusual hybrid, a product of both early 1970s counterculture and early 1980s computer culture" because Osborne was an early convert to computers in 1983. "I just became completely a computer nerd," he told Fulford. "For a few years I didn't come into the light." For several years he was at the forefront of modernizing the literary community of B.C., urging writers to switch to Kaypro computers. Osborne has also edited the fiction of D.M. Fraser, a legendary figure whose spirit survives in the editorial preferences of Geist. [See D.M. Fraser] Fraser and Stephen Osborne were among the co-founders of Pulp Press in the early 1970s along with Tom Osborne, Jon Furberg, Greg Enright and others. The first title was Tom Osborne's poetry collection Please Wait for Attendant to Open Gate, printed by Steve Osborne on borrowed equipment. Renting and subletting warehouse space, they launched 3 Cent Pulp, an irreverent and diverse booklet partly designed to be bought at cashier stands with loose change. Some of the success of Geist magazine can be traced to the brash populism of 3 Cent Pulp, as well as aggressive marketing. The Geist crew has not been shy to beat their own drum, and those reverberations have garnered respect as well as readers. Meanwhile Stephen Osborne remains a part-owner of Arsenal Pulp Press, chiefly operated by Brian Lam.


Small is beautiful. And necessary. Jane Rule's work first appeared via William McConnell's Klanak Press. A UBC-based mag called TISH gave rise to George Bowering, Fred Wah, Daphne Marlatt and many others--including Georgia Straight founder Dan McLeod. New Star Books grew out of Georgia Straight Writing Supplements. Harbour Publishing evolved from Raincoast Chronicles. Talonbooks grew out of Talon magazine. Before he moved to Toronto, Brian Fawcett ranted in a mag called NMFG (No Money From Government). Anvil Press is an outgrowth of SubTERRAIN magazine. And so on... Peter Newman and Sean Rossiter are just two of the many B.C. authors who first gained their reputations as magazine writers. Others include Daniel Wood, New Yorker contributor Edith Iglauer and, most famously, Douglas Coupland. Similarly, Geist magazine founder Stephen Osborne first came to light in 3-cent Pulp, which evolved into Pulp Press in 1981, which has since morphed into Arsenal Pulp. Along the way Osborne has morphed into one of the West Coast's most respected commentators and photographers, gathering his articles into an anthology, Ice & Fire: Dispatches from the New World, 1988-1999 (Arsenal $17.95). It includes a misleadingly titled and bemused memoir called 'Yevtushenko in Oklahoma' in which Osborne recalls a strange 1974 dinner at the once-popular Orestes restaurant in Vancouver with Yevgeny Yevtushenko, the most prominent Russian poet in the West during the Cold War.

Geist editor and founder Stephen Osborne has been chosen for the 2004 Foundation Award for Outstanding Achievement. Terry Sellwood, National Magazine Awards Foundation President, released an announcement on April 11, 2004, stating that the award recognizes his "talent, his passion, his building of the largest literary magazine in Canada.";