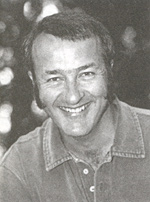 Queen Charlotte Island tuxedo -- in the days when real men were loggers, standard dress was a heavy grey Stanfield's undershirt, preferably worn for weeks without washing, and stained to suit the inhabitant's habits.

Mile House -- Along the road constructed to the Cariboo gold fields in the early 1860's, road houses were located at 12 to 14 mile intervals as rest points. These depots became towns, some still bearing the distance from Lillooet in their names, such as 100 Mile House.

hyack -- Chinook jargon for 'hurry up' or 'go fast'. It's rarely used in speech today except as the name for a killer whale at the Vancouver aquarium. It's also used by' a swim club and volunteer fire brigade in New Westminster (also spelled hyak).

Kanaka -- An Hawaiian Islander brought to B.C. as labourers or servants by the Hudson's Bay Co. between 1830 and 1860. The majority of Kanakas married native women and became integrated into native society. There is no trace of them today.

Century Sam -- Sid Williams of Comox was the model for a cartoon prospector character for the province's 1958 centennial. Williams owned a small claim and is commemorated by Century Sam Lake at the headwaters of Comox Creek.

Davis raft -- In 1913 a man called Davis from Port Renfrew invented a method of towing logs within a log framework to form rafts of massive volume but with negligible losses.