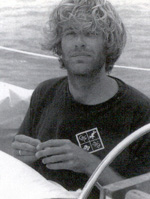 
"From a writer's point of view, medicine and health care is the best imaginable day job. You're surrounded by pathos and get these glimpses into people's lives during crisis points." -- Kevin Patterson

Born in 1964, Kevin Patterson grew up in Selkirk, Manitoba and put himself through medical school by enlisting in the Canadian army. He worked as a doctor in the Northwest Territories and on the B.C. coast while studying for his MFA at UBC.

His stint in the army and 'a broken heart' led him to the dock of a sailboat brokerage on Vancouver Island where, as a neophyte sailor, he purchased his boat called Sea Mouse. He planned to sail to Tahiti and back. His solo sailing expedition led him to publish his memoir The Water In Between.

His second book, Country of Cold, traces the lives of a group of classmates raised in small-town Manitoba. Stifled by their origins, they seek freedom in new corners of the world. A reunion brings them full circle. Many of the stories concern Patterson's medical training.

His short story collection Country of Cold received the Rogers Writers' Trust Fiction Prize in 2003 and the first City of Victoria Butler Book Prize in 2004.

Violence and medical tragedy unhinge the community of Rankin Inlet in Kevin Patterson's first novel Consumption (Random House, $34.95), where a local doctor, Balthazar, from New York City, gets to know Victoria, who was evacuated from the north at age ten in the early 1950s for treatment of tuberculosis. Marooned in a southern sanatorium, Victoria learned both Cree and English and adapted to store-bought food and southern media, but by the time she moved back to the tundra, she was estranged from the people she knew and their much-altered ways. Feeling oddly trapped by "internal exile,"; Victoria tries to raise a family but her son wants to emulate the traditional approach taken by her grandfather. Her daughters hanker for the mainstream pop culture spawned by 24-hour satellite TV. Her white husband Robertson grows distracted by new economic opportunities and her Inuit lover can only bring temporary solace. Once a legendary hunter, her father Emo has restricted himself to staying Rankin Inlet. Only disaster can re-unite them.

Kevin Patterson also co-edited a collection of first-hand accounts written by soldiers, doctors and aid workers on the front lines of Canada's war in Afghanistan, Outside the Wire: The War in Afghanistan in the Words of its Participants (Random House 2008).

Kevin Patterson's non-fictional investigation of the war in Afghanistan, published in 2008, led to his novel News From the Red Desert (Random House 2016), starting from the Kandahar Airfield in late 2001. He introduces an American war correspondent embedded with Canadian infantry, Deirdre O'Malley, "who has come to love the soldiers she covers so much that she's sliding toward feeling like a member of the mission herself." Her ex-lover is the American general in charge, making her increasingly uncomfortable with her growing awareness of civilian casualties and the use of torture.

As of 2016, Kevin Patterson continued to live on Salt Spring Island and work at the Nanaimo General Hospital as a specialist in internal medicine.

Articles: 1 Article for this author
The Water in Between (Random $32.95)
Info


A broken heart and an army stint led neophyte sailboat owner Kevin Patterson to aim for the South Seas. In The Water in Between (Random $32.95), the runaway voyager suggests most solitary sailors are refugees, not heroes.

"The 'traveller' drips with vanity,"; says Patterson, a former UBC Fine Arts student. "There is nowhere we can go where our shiny faces, hideous Tilley hats and too-large nylon packs would be unfamiliar to those being toured. Even if we imagine a place to be exotic, we're not, not any more."; The Sea Mouse is moored on Saltspring Island; Patterson is in Halifax studying internal medicine. 0-679-30999-3