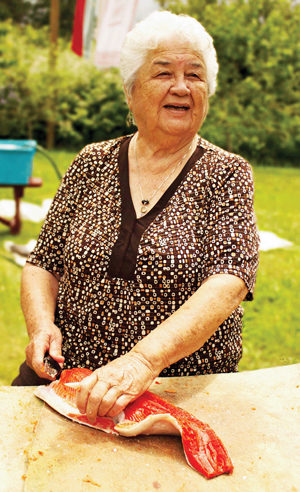 
Elsie Paul is a Sliammon (Coast Salish) elder, one of the last mother tongue speakers of the Sliammon language. She has collaborated with her granddaughter, Harmony Johnson, and UBC history professor Paige Raibmon, to tell her life story and the history of her people. Written As I Remember It: Teachings (??ms ta?aw) from the Life of a Sliammon Elder, by Elsie Paul, in collaboration with Paige Raibmon and Harmony Johnson, received an Honourable Mention from the British Columbia Historical Federation's Historical Writing Awards in 2015. See B.C. BookWorld review below.

Review of the author's work by BC Studies:
Written as I Remember It: Teachings from the Life of a Sliammon Elder

Articles: 1 Article for this author
Memoirs of a Sliammon elder: Elsie Paul
Review (2014)


Elsie Paul has lived more than eight decades on the BC coast, mainly within the Tla A'min (Sliammon) First Nation between Powell River and Lund, opposite Harwood Island. Raised by her grandparents who taught her the Sliammon language, Elsie Paul is one of the last surviving mother-tongue speakers.
She has shared the knowledge passed onto her from her grandparents in her new memoir Written as I Remember It.

Written as I Remember It: Teachings (? ms ta?aw) from the Life of a Sliammon Elder by Elsie Paul (UBC Press $34.95)

Shortly after she was born in 1931, Elsie Paul moved with her parents to Vancouver Island. They already had two small children so she was adopted by a grandmother, who had lost her youngest to the residential school experience.

Paul recounts the tragic story of how her grandparents had to go by canoe to pick up their near-death ten-year-old daughter from a Sechelt church-run institution. The little girl had got so sick at the school after only a few months. Nobody knew how or why.

Elsie Paul flourished as she moved around with her grandparents in their traditional territory looking for food. "People just lived everywhere in nature,"; she writes.
They travelled to seasonal camps and wood cabins shared by all Sliammon and whoever else might be in the area, with the permission of the Sliammon, to harvest and hunt.

"The ocean was their fridge. You know, you want fresh fish, you're going to go out there and get a fresh fish. You want clams, you're going to go down the beach and dig clams...
"My grandfather had this huge dugout canoe...And he used it a lot. Just going out fishing in front of the village, or travelling further up the coast. It was our vehicle.";

Entertainment included gatherings at a small dance hall at which some Sliammon played musical instruments like accordions and guitars. There were no chairs, only benches lining the walls.

Everyone brought their own cups for the tea that was served with sandwiches. Children carried pillow cases to the hall to be filled with oranges and apples to take home.
Occasionally there would be marching band competitions in the Sliammon village during special days or sporting events such as canoe racing and bone games.

But mostly days were filled finding and preparing food. Elsie Paul's grandmother would get her up at dawn. "Doesn't matter whether it was winter or summer, 'It's getting daylight - you get up now.' So we had long, busy days. The people didn't sleep in....Our lives were very scheduled, very structured.";

Much time was spent smoking fish, clams, ducks and deer meat for winter provisions.
"A lot of food was cooked in a pit. Like it's not barbecued but it's covered and cooked over hot rocks, so it steams and cooks under all this cover....It's almost like a slow cooker. Once that part is done you can smoke it in the smokehouse. And dry it.";

Trading was done between other First Nation communities and with European neighbours and some cash was earned by selling baskets her grandmother made, or items her grandfather harvested such as mink and otter furs.
Many of Elsie Paul's Sliammon teachings come through legends and stories. "And those legends always had a moral to the story. So that was your classroom.";

When she was a teenager, Elsie Paul took part-time work in canneries or in places like Chilliwack where they could pick berries for commercial growers.

In 1950, at the age of 18, Elsie married William Dave Paul, whose family had transferred to Sliammon. He worked at remote logging camps and came home for weekends.
Their first home was a shell of a house. "There was no inside plumbing. There's no running water. It was called a two-room and a path. [chuckles] Yeah, in those days we just had outhouses around here.";

It wasn't long before indoor plumbing, electricity and cupboards were added.
Elsie Paul already had a child when she moved into her first home. Eight more children followed and extra rooms were added to the little structure.

When her husband wasn't working Elsie Paul picked up odd jobs: first at an oyster plant, then later at Walnut Lodge (a rooming house in Powell River for mill workers) and at the hospital in housekeeping.

When the Sliammon Band took over administration of their social service department in 1972, Elsie Paul was asked to fill that role because she was fluent in the language and could communicate with the elders. "I didn't have any training but was told, 'You got the ability. You can do it. Just follow the policy.'";

Two of her children died before they reached adulthood--one as a baby due to illness, the other as a teen in a car accident.
One of her three sons died in adulthood and she also lost her hard-working husband in 1977 at the age of forty-five due to heart failure.

Elsie Paul continued working for social services for 24 years and got her high school upgrading at Malaspina College when it opened in Powell River. She later attended UBC in Vancouver to get her registered social work certificate. She eventually retired and was later elected to her band council.
Even when she retired in 1999, Elsie Paul continued to do community work and teach part-time at the local Malaspina College. She had to be convinced to take on the latter role.

"I guess it takes other people to tell you what you're worth,"; she says in her book.
In 2010, Elsie Paul received an honorary doctor of letters from Vancouver Island University for her life and career in service to others and dedication to supporting First Nations well-being.

"All of the things that I remember growing up that our people did is all gone... When I talk about the things we did, my grandchildren don't understand what I'm talking about. It's so different for them... I support education. It's very important. The tools that our children need for the future. To get by, to survive in this world. But at the same time, I stress the importance of remembering who you are, where you came from, and our culture and how rich it was. It's not that we're gonna go back there and want to live the way our ancestors lived. But to look at that and say, 'I'm from a rich culture.'";
- Elsie Paul