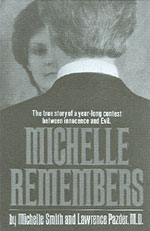 
Born on April 30, 1936 in Edmonton, Alberta, psychiatrist Lawrence Pazder moved to Victoria, B.C. where he treated a patient named Michelle Smith. Using hypnosis, Dr. Pazder allegedly helped Smith recover lost memories of Satanic Ritual Abuse by her parents. A devout Catholic, Dr. Pazder's therapy and treatment for Michelle's alleged experiences included hypnotism, exorcism, and conversion to Catholicism. After the therapy, Pazder and Smith married, divorcing both their previous spouses. Smith's purported experiences appear in Michelle Remembers (1980), which she co-authored with Pazdner. The book quickly became a huge success, fostering an urban myth regarding an epidemic of occult crime in America that was prevalent during the 1980s. Michelle's accounts are now widely believed to be false. For example, the book claims that at the end of an 81 day ceremony during the Fall of 1955, Satan appeared, only to be opposed by Jesus, the Virgin Mary, and the archangel Michael. However, there is no evidence to suggest Michelle was absent from school during the 81 days of the ceremony. Despite the lack of evidence to support such claims, Pazder touted himself as an expert in "ritual abuse," a term that became a buzzword among social workers. Pazder appeared on talk shows to discuss the matter and consulted in countless cases regarding "ritual abuse." Pazder also ran Anawin House, a drug and alcohol rehab centre, until his death on March 5, 2004.