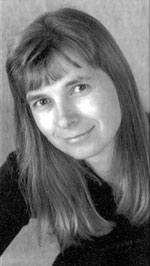 
Jacqueline Pearce of Burnaby explores the perilous landscape of adolescence in Weeds and Other Stories, an anthology of short stories (Thistledown 2003 $14.95). In the title story, Karen, an outsider at school, loans her algebra homework yet again to the shallow but popular, hipster-skirted Chelsey. An incident at the bus stop opens Karen's eyes to the beauty in the mundane, and how kindness sometimes rewards the giver more than the receiver. In 'The Trickster', Josh's mother sends him to the university to fetch a dead coyote for her grade six class. He'll have to use public transit, something he's been avoiding since the night at the Skytrain stop when four guys mugged him. When Josh meets the four muggers again, the foul-smelling creature he's carting home bequeaths him an otherworldly sense of power and elation. In 'Girls' Night Out', the final story, Julie-once so close to Caitlin and Tia that everyone called them the Three Musketeers-is adrift. Even though she's broken up with jerky Rick, she wants him back. She's lost touch with her friends and even herself. It takes a daring late-night skinny dip in the closed community centre pool for Julie to regain her bearings. 1-894345-64-9

Pearce's second book for children is Discovering Emily (Orca 2004, $7.95), a story about Emily Carr as a young artist who, at age eight, shows no interest in behaving like a lady. It was followed by Emily's Dream (Orca 2005, $7.95 1-55143-368-0) in which the orphaned Emily must learn to cope with her cruel eldest sister. Pearce's grandmother lived nearby Emily Carr's heritage site home in Victoria. For ages 8-12, Pearce also published Dog House Blues (Orca 2005) and The Truth about Rats (and Dogs) (Orca 2006). Pearce's first novel, The Reunion, concerns the internment of Japanese Canadians during World War II (Orca 2002).

In Pearce's seventh title, Manga Touch (Orca, 2007), an outsider named Dana hopes her knowledge and appreciation of manga art will help her become popular during her school's trip to Japan. After the only manga fan she meets in Japan refuses to talk to her, Dana must make an effort to gel with the "in-crowd" from her school, known as the Melly Mob. To do so she must come out of her shell to confront and overcome the oppressive leader of that group, Melissa.

In Pearce's most recent novel, Mystery of the Missing Luck (Orca 2011, $6.95), Sara must find the lucky cat statue that disappeared from her grandmother's beloved Japanese bakery, which is not doing well. By finding the cat statue, Sara believes she can restore the bakery's lost luck and prevent its closure.

In writing her latest novel, Siege (Orca $9.95) Jacqueline Pearce learned how to fire an 1812 musket, and the speed of the current over Niagara Falls if you fell in near historic Old Fort Erie. Her protagonist, Jason doesn't share her interest in history. When he agrees to go to camp with his cousin, Sean, he doesn't realize it's a War of 1812 re-enactment camp - no cell phones or electricity. It's not all bad. Firing the muskets, and sneaking out at night, getting into trouble is fun, but Jason and his friends keep running into the same camp counselor, and he is clearly up to no good. When they start to investigate what he's doing, they find they may have taken on more than they can handle.