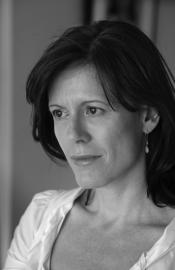 Originally the site of a First Nations village called Ee'yullmough, the beach area became known as Jerry's Cove due the logging operations of Jeremiah Rogers, giving rise to the current name Jericho. Later the site of Vancouver's first golf course, it was overtaken by the National Department of Defence in 1919 for a seaplane base and ultimately ceded to the Vancouver Park Board in the early 1970s.

"I spend a lot of time walking in Jericho Park," says Kitsilano resident Miranda Pearson, "and love it there. Ever since I have lived in Vancouver, since 1991, that has been a special place for me, especially the field to the rear of the park where wild lupins and sweetpeas grow. I believe the park used to be a golf course a hundred or so years ago, and this place was where the club house was, hence all the domestic flowers. I identify with that, the combination of wild and domestic, and the idea of the past growing through the present."

bobbing seal heads in the sea,

daring to push out farther till

we were black seal-heads to the lifeguards,

Our children, engrossed in the

watched by reluctant friends who

hadn't realized we would be gone that long

but so far we swam, the beach

kneeled into the drifting body of sea,

it rose up to be a pewter shelf.

We delayed there. Trod water.

This was the best time: the mountains

across the bay sat grand in their

crumpled ball gowns and we beneath

as if children, our twin heads, pearly legs

where the freighters graze,

Miranda Pearson was born in Westerham Kent, England. She attended art school in London, and studied at the University of Brighton. She moved to Canada in 1991 to work as a psychiatric nurse. She received an M.F.A. in Creative Writing from the University of British Columbia, where she was poetry editor for Prism International. Pearson has taught Creative Writing at the University of British Columbia and at Simon Fraser University. She was the poetry mentor at the SFU Writers Studio 2007-11, and has taught various Continuing Studies courses at SFU. Pearson lives in Vancouver where she has worked for Vancouver Coastal Health since 1991, specializing in Eating Disorders. She also provides private manuscript consultation and editorial input for poetry in progress.

"We live such flammable lives," writes Pearson in the title poem for her fourth collection, The Fire Extinguisher (Oolichan $17.95). Again Pearson evokes the struggle to live outside and beyond vulgarity and catastrophe, bravely beholden to glimpses of grace. There are some particularly sublime and subtle poems about human frailty when a body has been invaded by the c-word.

Pearson has contributed several book reviews and essays to Event and Arc magazines. Poems were selected for BC's 2002, 2010 and 2015 Poetry in Transit program. Numerous appearances on CBC including North by North West arts program. A long poem from The Aviary-Silver Collection-was published in an art catalogue produced to accompany the Medicine Hat Museum in Alberta 2003 exhibition, "Polish", an installation by artist Mary Kavanagh. In 2009 a CD of Selected Poems was recorded, with original music by Paul Plimley.

Her collection The Aviary (2006) won the Alfred G. Bailey Prize in 2006, awarded by the Writers Federation of New Brunswick.

Her collection Harbour (2009) was shortlisted for the Dorothy Livesay poetry prize.

Her collection The Fire Extinguisher (2015) was nominated for a Dorothy Livesay poetry prize.


In Prime, Miranda Pearson's first collection of poetry, the narratives of female identity, the white wedding, and the enshrined position of the mother are interrogated, using the lyric as a form of cultural critique in an examination and mockery of romantic love and heterosexual relationships. At the same time, the poems constitute an irreverent, lush romp, a celebration of friendship and absurdity.


Miranda Pearson's The Aviary is a collection of sadnesses; not the fierce grief of injustice or bereavement but an endless grey coastal winter.
"...everyone pretends, more or less touches life with gloves on.";
All the love and/or lust affairs end badly, romance is a decoy, and longing cannot be repaired.
"Desire.
It's always the same.
Its folly.
Its stubborn inability to
live in contentment.";
Any hope out there, a reprieve from wariness and weariness? Not much, not even in the series of six poems entitled "Yoga Retreat"; written at St Peter's Abbey. Toward the conclusion of this volume, one poem hints at a tentative happiness: a walk with a friend, yellow tulips.
A dismayed middle-aged poet tries to make sense of it all. Irritable and nostalgic, the regrets would be disabling if it weren't for their poignancy, "nothing is how I planned it."; Readers who have traveled in the desert of middle age will recognize the territory. For those who have not, these poems about pervasive disappointment may entice a detour. As if.
"Somebody told me
It's possible to mend the past
through imagination,
to breathe into it
a different life.";
There is a chronic low-grade chill in the inner atmosphere but a truly depressed poet would not have sparks enough to write as well as Pearson does about depression; it's an exhilarating paradox. The writing is not disappointing, it's skilled. Then there is the promise of homeopathic poetics; a little more of what ails you will cure you. Perhaps a reader who can read Aviary deeply enough will be flipped out into sunlight. 0-88982-230-1
-- review by Hannah Main-Van Der Kamp


Although it may be critically incorrect, it's almost impossible not to read Miranda Pearson's poems in Harbour as autobiographical. The poet's brief bio is revealing and her earlier work covered much of the same emotional territory.

Pervasively melancholic, this third title of Pearson's proves the writer's adage, "write what you know."; She knows mental health (she works in the field professionally), therapy (she throws herself on the couch), failed romance (again) and the slightest, wispiest hope of becoming contented, at last ("the trick is not to want more";).
The first section called 'Touched' is set in the historic past of a Victorian asylum for "lunatics."; It then moves in the same building to the present but with cures that are not more effective. The "I"; of the poems shifts; a patient speaking about the doctors, doctors' notes about patients, a caregiver and the cared for.

The use of historical records about the insane and their treatment makes painful reading as in: her illness was caused by over lactation, electric shock treatment must be right because the Dr says it is. The nurses, drinking, are boisterous/depressed after a shift. The patients sit, "curled like commas/ serious porcelain profiles.";

As in her previous book, The Aviary, Pearson recounts the old hurts of love gone bad, love as "recycled cruelty."; Here, in the second section, the plaintive longing for "a man charitable and generous"; sometimes seems just petulant. Her wishes it seems are never granted.

Attempts at hedonism turn out not to be "the secret solution."; Why, she asks herself, does she not take the flying leap into hopefulness? The reader also asks, and then remembers, how impossible the leap can be. Perhaps this poet is carrying the melancholy that many of us cannot admit in ourselves.

When the poet is in England, she wants to be in Canada, and vice versa. The man she loved, she's glad to be rid of. The poems are set in at least twenty different locales (Vegas, Toronto, Kent) and they have much the same restlessness. Motherhood is a field of conflicts; it's both expansive and limiting. Some of the loving is fierce, other times it's passive.

These poems are sad but not vengeful. There is no blaming but they are also completely devoid of mirth.

Unmitigated dismal inner-scapes, so why read them? Well, think of the huge popularity of the HBO Series In Treatment. These personal self-revelations from Pearson fascinate for several reasons. For one, we've all been there at some point. It's a relief to find a piece of yourself on a page. The reader closes the book with a sigh, "This is also who I am.";

As well, these poems are so well-written. If the writing was dismal, the whole would droop. To write well about melancholy, the lines must shine, and they do. "Critical and irritated, you don't know why / It's turned out this way.";

Only the last of more than one hundred poems has a faintly optimistic tone. In "Liminal"; there will be a new city to explore, and a new love. The reader wants to cheer but can't. In an aircraft looking down on the "earth a glimpsed atlas,"; the relationship ahead may turn out to be an "old song on the new iPod.";

Pearson's disappointment engages; this is a strong and honest book about self-confessed disscontent. 978-0-88982-261-0


Nominated for Harbour
BC Book Prizes (2010)


Harbour looks at ways humans are driven to construct territory in whatever space is available, however borrowed or makeshift. In the first section, "Asylum,"; Miranda Pearson turns to her experience of working in psychiatry. We hear the voices of both caregivers and patients, and flit back and forth between these two roles, contrasting and unraveling their meaning. Moving from hospitals to museums, the poems explore the tensions between antiquity and modernity, and how we collect and display artifacts, preserving life in frozen morgue-like containment. Ideas on hoarding are touched upon, how even assembling a collection of poetry is a type of acquisition - of imagery, words, ideas, and other texts. Harbour - the noun and the verb are interchangeable - illuminates the human drive to nest, gathering together ideas on how we seek refuge, a sanctuary, a keep. Miranda Pearson is the author of two previous books of poetry, Prime and The Aviary. She lives in Vancouver.
BC Book Prizes catalogue