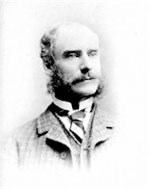 
Born in Dublin, Ireland on July 23, 1821, Joseph Pemberton, Vancouver Island's first surveyor-general, arrived in Victoria in 1851 after a five-month voyage that he described as, "the longest passage that can be taken from England to any known part rounding either cape, unless it be in the vicinity of Sitka or Petrapauloski."

He soon gained the distinction of having the largest personal library in B.C., a collection estimated as high as 3,000 volumes. Often inscribed by Pemberton, copies of books he owned still surface occasionally in antiquarian bookstores. Educated as an engineer and mathematician, Pemberton first worked for the Hudson's Bay Company from 1859 to 1864. As Vancouver Island's first surveyor-general, he explored the Cowichan and Nanaimo areas, overseeing construction of roads and bridges, and he developed townsites in the lower Fraser Valley. He also published Facts and Figures Relating to Vancouver Island and British Columbia: Showing What to Expect and How to Get There (London, Longman, Green, Longman and Roberts, 1860). Pemberton was a member of the first House of Assembly of Vancouver Island from 1856 to 1859 along with Dr. John Helmcken, Joseph Mackay, James Yates, Joseph Porter, Thomas Skinner, John Muir and Dr. John Kennedy. He continued in politics when the colonies of Vancouver Island the British Columbia were united, elected into the legislative council in 1866, but he retired from politics in 1868 to form an investment and real estate company with his son Frederick. This evolved into the modern firm widely known in British Columbia as Pemberton Securities. Pemerton's palatial home known as Gonzales was a focal point for Victoria's high society and artists. He died in Oak Bay on November 11, 1893.

Facts and Figures Relating to Vancouver Island and British Columbia: Showing What to Expect and How to Get There (London, Longman, Green, Longman and Roberts, 1860).