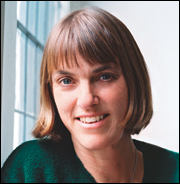 
A pioneer of community mapping, Briony Penn of Salt Spring Island is a writer, artist and lecturer who holds a Ph.D. in geography from Edinburgh University.

"Map it and save it," says Briony Penn. "Mapping is a great excuse to talk to the neighbours, old-timers and local kids, and listen to tree frogs and barred owls, even in the city."

Penn has provided the foreword, and some of the inspiration for, Islands in the Salish Sea: A Community Atlas (Touchwood Editions, 2005), edited by Salt Spring Islanders Sheila Harrington and Judi Stevenson, in order to generate protective awareness for 17 of the largest islands in the Strait of Georgia, 12 of which already have their own land trust or conservancy organizations. Approximately 28,000 people live on these 17 islands from Quadra in the north to Saturna in the south.

Penn is also the author of A Year on the Wild Side (H&S 1999) [See review below] and she provided illustrations for Michael M'Gonigle's Planet U (New Society, 2006). Her children's book is Kids Book of Canadian Geography (Kidscan 2008).

Replete with photographs from various stages of Ian McTaggart-Cowan's life, Briony Penn's The Real Thing (Rocky Mountain, 2015) is touted as the first official biography of "the father of Canadian ecology," Ian McTaggart-Cowan (1910-2010).

Authorized by McTaggart-Cowan's family, it was completed with the support of the University of Victoria. [Coincidentally, Harbour Publishing released Ian McTaggart-Cowan: The Legacy of a Pioneering Biologist, Educator and Conservationist, co-edited by R. Wayne Campbell with Ronald D. Jakimchuk and Dennis A. Demarchi, slightly in advance of Penn's book.]

Ian McTaggart-Cowan's milestones were many: he was the founder of the first Canadian university wildlife department, he was a pioneer of nature-based television shows, and his early work in Canada's national parks became the basis for wildlife conservation and environmental education.

McTaggart-Cowan addressed issues from climate change to endangered species before these topics were on the public's radar.

The Real Thing purportedly "takes the reader on an adventurous and inspirational journey through the heart of North American ecology, wilderness, landscape and wonder." The book won the 2016 Roderick Haig-Brown regional prize which recognizes the author of the book that contributes most to the enjoyment and understanding of British Columbia. It was also shortlisted for a Hubert Evans non-fiction prize.

ALSO: According to RMB: "Cecil Paul, also known by his Xenaksiala name, Wa'xaid, is a respected elder, activist and orator, and one of the last fluent speakers of his people's language. Cecil was born in 1931 in the Kitlope and raised on fishing, hunting, trapping and gathering. At the age of 10 he was torn from his family and placed in a residential school run by the United Church of Canada at Port Alberni, on Vancouver Island. For years, Cecil suffered from the pain of the abuse inflicted there. After three decades of prolonged alcohol abuse, he finally returned to the Kitlope and the positive influence of his people's knowledge and ways. Once Cecil's healing journey began, he eventually became an outspoken leader against the industrialization of his people's land and traditional territory, working tirelessly to protect the Kitlope, the largest intact temperate rainforest watershed in the world. Now in his late 80s, Cecil still lives in his ancestors' traditional territory, and his work protecting the Kitlope continues to this day." He is the author of Stories from the Magic Canoe of Wa'xaid
(Rocky Mountain Books 2019 $30) as told to Briony Penn. 9781771602952

Review of the author's work by BC Studies:
A Year on the Wild Side

Articles: 2 Articles for this author
A Year on the Wild Side
Article


A naturalist, illustrator, geographer and nature columnist for Monday magazine, Briony Penn is a rare bird herself, having deep roots in British Columbia. One set of her ancestors settled in Victoria and Saltspring Island; the others in the Upper Fraser, not far from Big Bar. She is comfortable in either environment, fossicking on the sheltered beaches of the Gulf Islands, or frolicking in Chilcotin sagebrush.

Penn and her husband Donald, and their two rambunctious young boys, Callum and Ronan, live on Saltspring, in a large old heritage home that they brought over from Victoria. "That was a nightmare,"; says Briony. "They sawed the house in half and put each piece on two decrepit old barges. More than once we were sure that our recycled home was going to end up as so much driftwood.";

The command post for Penn's writing is a comfortable home office she shares with Donald, a wildlife artist and architect. From there she produces the twice-monthly columns for Monday that form the basis for A Year on the Wild Side. She acknowledges an intellectual debt to Gilean Douglas, the reclusive Cortes Island naturalist who wrote quirky nature columns for the Victoria Times Colonist in the 1970's (and about whom a new biography is being published this fall, from Sono Nis Press).

Briony approaches nature and writing like a great cook would a gourmet supermarket. She grazes the overstocked shelves, selecting wildly disparate items to combine into nouvelle cuisine.

Mick Jagger is used to explain the biology of red tide. The canals of Venice are compared to local swamps full of skunk cabbage (and found wanting).

Plate tectonics are used as a rationale for cheaper ferry fares.

It is a mistake, though, to pigeonhole Penn as merely an upbeat and humorous writer who deals with natural history. There is a profoundly committed side of Penn that has led her to help create B.C.'s Land Conservancy. As well, she teaches ecosystem restoration and devised a scheme for marketing beef from sustainably-managed B.C. ranches.

When asked to name her greatest achievement, she responds in typically modest fashion. "Oh, no question,"; she says. "It was the Queen's Toads.";

The Queen's Toads adventure took place in Edinburgh, Scotland, where Penn was pursuing a Ph.D. in Geography. Every day on the way to University, she would ride her bike by a pond in Holyrood Park, adjacent to Her Majesty's summer estate, Holyrood Palace. Each fall, hundreds of toads would flock to the pond, in search of mates. "It was absolute carnage,"; Penn says. "There they were, hopping all over the road, blinded by their lust, and cars would just mow them down. So I wrote to the Queen and told her what was happening to her poor toads, and now they block that section of the road off for a few days every year.";

"A certain unnamed BC Park wanted to expand a stupid parking lot into some beautiful natural habitat,"; she says. "So I went to the area and dug around until I found a long-toed salamander. Then I brought the Parks people out and showed them how they couldn't possibly destroy priceless habitat of this solitary survivor of an extremely rare, endangered species, one that biologists all over the world were talking about. They immediately agreed, and cancelled the parking lot expansion.";

When I point out that long-toed salamanders are dirt-common if you know where to look for them, she replies, with a definite glint in her eye, "You tell me what's more important, that salamander's peace of mind or parking space for one more Winnebago.";

Briony often puts her geography skills to work in the design and environmental interpretation consulting work that she and her husband Donald collaborate on. She advocates community involvement in the mapping of local ecosystems and natural features and lays out her methodology (as well as some stunning maps) in her other book, co-authored with Doug Aberley and Michael Dunn, Giving the Land a Voice (Land Trust Alliance of B.C. $20).

Her next book project is historical-a composite view of elderly B.C. ecologists and naturalists, men and women who have made incredible contributions to our understanding of the provincial environment. "I'm going to visit them, drink lots of tea with them, and write up their stories before they're gone,"; she says.

Meanwhile A Year on the Wild Side offers 52 stories in a 12-chapter format, each chapter being a month of the year. She introduces sexy salamanders, marvellous mushrooms, murders of crows, endangered marmots, Salish myths and great blue herons that are compared to Dr. Seuss characters.
Penn is also involved in the design of the Gwaii Haanas Visitor Centre in the Queen Charlotte Islands and the Gulf of Georgia National Heritage Site.

The Real Thing: The Natural History of Ian McTaggart
Article (2015)


Like two women wearing the same new dress to a wedding, publishers can release books on the same subject at the same time. It doesn't matter who brought the dress first. The wedding must go forward.

A pioneer of community mapping, Briony Penn of Salt Spring Island is a writer, artist and lecturer who holds a Ph.D. in geography from Edinburgh University.