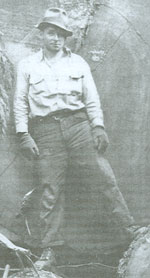 
"Being a halfbreed, I had to fend for myself." -- Hank Pennier

One of the first unfettered Aboriginal memoirs from British Columbia-not an extensively reworked, sanitized "as told to"; biography-is Chiefly Indian: The Warm and Witty Story of a British Columbia Half Breed Logger (1972) by Henry "Hank"; Pennier, a Fraser Valley logger and raconteur.

After languishing on the edges of political correctness for three decades, this rough-hewn classic was rescued from oblivion and repackaged by a scholarly press as 'Call Me Hank': A StÃ³lo Man's Reflections on Logging, Living, and Growing Old (UTP $24.95), edited Keith Thor Carlson and Kristina Fagan.

"About the only good thing about a being a halfbreed,"; he once said, "I could buy liquor.";

Hank Pennier was the grandson of a Quebec businessman who had arrived in British Columbia in the 1870s, then left his Aboriginal wife and their son George in order to return to Quebec. George Pennier, Henry Pennier's father, grew up on a Harrison River homestead and married another halfbreed [Pennier's term and spelling] named Alice Davis. Two of their eight children died.

Not long after Hank Pennier was born in 1904, his father was killed in a hunting accident. Raised on an 87-acre homestead adjoining the Chehalis Reservation, Pennier became friendly with his new step-grandfather at Union Bar, a settlement about three miles east of Hope, and heard many Aboriginal stories from him.

Pennier was an altar boy at St. Mary's mission school, operated by the Oblates, but he was forced leave that school at age 13 due to over-enrolment. He attended a public school at Hope until age 15, then started logging in 1922. Two years later he married Margaret Leon, "a Harrison River Indian too except there is just a little Chinese in her,"; and they had eight children.

"And all of us are halfbreeds,"; he said, "not white men and not Indian yet we look Indian and everybody but Indians takes us for Indians."; It was Pennier's great hope that one day racial differentiations could be eradicated, "but I know I won't be around then. Too bad because then there won't be any halfbreeds either and that will be a damn good thing.";

By the 1960s, serious logging injuries had left Pennier reliant on a crutch and cane, unemployable, but buoyed by a lively sense of humour and full of stories as a rustic philosopher. Although he was reduced to bingo, Reader's Digest, television and social assistance, Pennier retained a proud sense of accomplishment for having worked extremely hard and for having gained recognition as an excellent field lacrosse player.

In his late 60s, while living on Nicomen Trunk Road, east of Mission, Pennier received a visit from a Welsh-born linguistics professor from Simon Fraser University, E. Wyn Roberts, who hoped to tape record some "Indian stories"; for a linguistic project involving the Halkomelen language.

Pennier was congenial but not easily controlled. He basically wanted to tell his own stories instead. After several meetings and textual collaborations, Roberts essentially abandoned his initial plans for his linguistic approach and decided to serve as Pennier's unofficial agent.

This self-penned memoir, complete with some original spellings, erred on the side of being colourful and frank, but it provided many heartfelt comments by Pennier on his halfbreed status.

"Outside of my work I could not join the white society, socially, and if I went to an Indian party and there was liquor involved I was taking a chance being jailed regardless of whether I had supplied them with liquor or not,"; he wrote.

"If I had an Indian in the car and also a sealed bottle of whiskey or a sealed case of beer and a cop stops me on a routine check I would be charged with kniving [conniving] which has several meanings like the intention of giving him a drink sooner or later.";