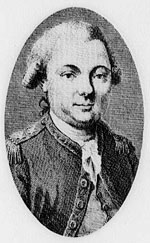 Unduly overlooked by history, the first Frenchman to see British Columbia, Jean-FranÃ§ois de Galaup, Compte de la Pérouse, was responsible for the first French book that contains eyewitness reports of B.C. Julius S. Gassner, a 20th century translator of journals that were sent back to France by the La Pérouse expedition via Siberia in 1787 and via Botany Bay in 1788, wrote, "The fame of Admiral Jean-FranÃ§ois Galaup, Comte de La Pérouse has been unduly eclipsed by that of Captain James Cook.";

Born on August 23, 1741 near Albi, France, La Pérouse (also commonly spelled Lapérouse) entered the navy at age fifteen in 1756 and fought the British off the coast North America in the Seven Years' War. He gained prestige after two successful raids on two English trading posts in Hudson Bay in 1782, Fort Prince of Wales and Fort York. Despite the disapproval of his family, he married a Creole named Louise-Eléonore Broudou from present-day Mauritius.

La Pérouse was a great admirer of James Cook, and he was well-liked by his crew. Seeking a Northwest Passage, Jean-FranÃ§ois de Galaup de la Pérouse was sent by Louis XVI of France in 1785 with 114 men and two vessels, La Boussole and L'Astrolabe (commanded by Captain Paul-Antoine-Marie Fleuriot de Langle), to explore the Pacific Northwest by sailing from Brest via Cape Horn, Easter Island and Hawaii.

Given that his expedition was ostensibly scientific, La Pérouse was able to send dispatches back to Paris via the Spanish. He prophetically wrote, "Though the Russians are established in the north and the Spaniards to the south, many centuries will unquestionably elapse before these two nations meet; and there will long remain between them intermediary points, which might be occupied by other nations.";

The French sighted Mount St. Elias at 59Âº north on June 23, 1786. La Pérouse wrote, "This sight of land, after a long voyage, usually excited feelings of delight; but on us it had not this effect. The eye wandered with pain over masses of snow, covering a barren soil, unembellished by a single tree.";

Having reached Yakutat in Alaska on June 24 and traded with the Tlingit, La Pérouse was disgusted by the huge lip-pieces worn by the women and noted the Tlingit were passionately fond of gambling. "This is the grand source of their quarrels; and I do not hesitate to pronounce that this tribe would be completely exterminated if the use of any intoxicating liquor were added to these destructive vices.";

La Pérouse sailed south, sighting the Queen Charlotte Islands and naming Sartine Island, now an ecological reserve located WNW of Cape Scott, after French Minister of the Navy Gabriel de Sartine, Count of Albi (1729-1801). Unable to enter Nootka Sound on August 25, La Pérouse never went ashore in British Columbia but his voyage was significant for spurring the English and Spanish to attempt an agreement for exploration and commercial control.

While sailing south in 1786, Lapérouse named many locations on Haida Gwaii. His men were the first Europeans to note the bank west of Vancouver Island that is now called La Pérouse Bank (48 45' 00" 125 55' 00) southwest of Barkley Sound. Not to be confused with Mount La Pérouse on Haida Gwaii, Mount La Perouse in Alaska at 10,443 ft / 3,183 metres is the 84th highest mountain in Alaska and the 3690th highest mountain in the United States.

The French proceeded as far south as Monterey, California before departing for Macao on September 24, 1786. They explored the Pacific for two more years, selling furs in the Orient,and exploring from China to Australia, almost matching Cook for endurance and scope. A French scholar who sailed with La Pérouse, M. de Lamanon, later wrote, "...what will always distinguish this voyage, what will render the French nation truly glorious in the eyes of all philosophers, of our contemporaries and of posterity, will be our having frequented nations, reputed barbarous, without shedding a drop of blood.";

In fact, in December of 1787, the expedition lost eleven crew members and the commander of the Astrolobe, de Langle, when they were murdered by Samoan Islanders. Both ships, and all their remaining men, were lost, possiby during a violent storm off Vanikoro Island in the Solomon Islands in 1788 or 1789. It was not until 1827 that an Irish captain, Peter Dillon, found evidence of the tragedy and later determined the site of the sinkings was in Vanuata (the new Hebrides).

Dunmore, John (editor, translator). The Journal of Jean-FranÃ§ois de Galaup de la Pérouse / 1785-1788 Volume I (Hakluyt Society, 1994). Volume II (Hakluyt Society, 1995). [Volume I covers the voyage to Australia, the Pacific coast of North America, and Macao. The main pagination of this and the following volume is continuous. Volume II concerns the voyage between the Philippines and Kamchatka, then to Australia. The appendices include related correspondence and the muster rolls of the ships.