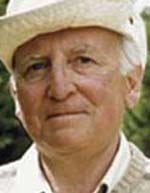 
Born in Penticton on February 9, 1922, Ernest Perrault was the older brother of Senator Ray Perrault. He spent 42 months in the Royal Canadian Air Force. Raised in Vancouver and influenced by Earle Birney at UBC, he wrote a thinly disguised novel based on the life of B.C. timber baron Gordon Gibson, The Kingdom Carver (1968), the fictional counterpart to Gibson's much later memoir called Bull of the Woods. Perrault used a rough 'n' ready protagonist named Dave Laird to recall Gibson's struggle to establish his logging operations near Klahosat in Clayoquot Sound.

His second novel The Twelfth Mile (1972) is a suspenseful tale about a West Coast towboat operator. A third adventure novel Spoil! (Doubleday, 1975) was partially derived from Perrault's five years in the Arctic making documentary films. At the peak of a global energy crisis, a mining engineer named Ian Danelock suddenly has an ecological disaster on his hands when an oil derrick 400 miles from the North Pole sends a geyser of flames 250-feet into the air.

While working mainly in public relations and advertising, Perrault also wrote feature-length film scenarios, radio and television documentaries and dramas. He was hired to write a corporate history called Wood and Water: The Story of the Seaboard Lumber and Shipping (Douglas & McIntyre, 1985).

Having worked for secretive Chinese Canadian millionaire Tong Louie, who developed the London Drugs business empire, and dozens of IGA grocery franchises in British Columbia, Perrault was hired to produce the biography Tong: The Story of Tong Louie, Vancouver's Quiet Titan (Harbour, 2002). The extensively illustrated and complimentary portrait was expanded by Perrault's publisher to reflect the difficulties, perseverance and accomplishments of Chinese Canadian society in British Columbia in the 20th century. It received the Bill Duthie Booksellers' Choice Award at the 2003 B.C. Book Prizes.

Review of the author's work by BC Studies:
Breaking the 'Silence': A Review of Tong: The Story of Tong Louie, Vancouver's Quiet Titan


When Tong Louie died in 1998, more than 2,000 mourners attended the funeral. Tributes by David Lam, former Lieutenant-Governor of B.C., and many others spoke of his refusal to acknowledge barriers. Tong: The Story of Tong Louie, Vancouver's Quiet Titan by Ernest Perrault (Harbour $39.95) provides full documentation of those words of praise, supplemented by lavish photographs. The second of eleven children, he was born in 1914 to Hok Yat Louie and his second wife, Young Shee. Hok Yat came from the Guangdong region of China and founded a wholesale grocery company in Vancouver's Chinatown, raising his growing family in cramped quarters above the store. Three partitioned areas, all without doors, served as cooking and sleeping quarters; sanitary arrangements were rudimentary, and there was no electricity. The business prospered so well that in 1930 Hok Yat had a new building constructed at 254 East Georgia. Here the family had more rooms, including a modern kitchen and a bathroom. Hok Yat was also able to send his first son to college in Hong Kong. Tradition dictated a lesser role for the second son, but Arthur Laing, a family friend and prominent politician, persuaded Hok Yat to also send Tong to university.

When Tong Louie entered UBC in 1931, there were only 27 students of Chinese background (ten of them were women), and they knew that most professions were closed to them. They were barred from law, medicine, the pharmaceutical industry, teaching in public schools and working for the government. Tong chose agriculture, thinking he was less likely to find discrimination there. When he graduated he was offered a job by Consolidated Mining and Smelting in Trail. But when Hok Yat died from diabetes, Tong decided to enter the family business, and never again used his agricultural training. The second son had already shown a flair for business in what was dubbed "the sesame seed affair."; When Hok Yat's plan to import sesame seeds from China turned out to be a mistake because Vancouver's Chinese population simply could not afford such luxury, Tong salvaged the project by persuading Four X Bakeries to try the seeds in their baking process. They soon became popular. Tong's intervention was typical of his quick thinking and entrepreneurial skills. In his hands, the H.Y. Louie Co. grew, and the family's companies eventually included London Drugs and dozens of IGA franchises across B.C. Tong became a multi-millionaire.

Tong Louie believed there would always be a place for neighborhood-based entrepreneurs, who are involved in their communities. As one of the most successful merchandisers in Western Canada, Tong Louie had this to say about super stores in 1990. "Shopping in one of the megastores calls for a degree of stamina and endurance never required in the lazy days of the local grocery store. Today a customer walks 50 yards east to find a pound of tea, continues 75 yards north to search for a can of cream, then 60 yards west to locate the sugar. It's a great cardiac workout. I have seen pensioners standing at the checkout counters, out of breath, and perspiring from trotting up and down the food aisles. It has reached a point where store managers are going to have to install showers.";

The most dramatic example of Tong's refusal to be limited by hurdles occurred in 1941. Just before his marriage, he bought a house in the white middle-class neighbourhood of Dunbar-Southlands. Soon afterwards, a delegation of 23 neighbours took a petition to city hall urging the council to prevent "the intrusion of the Oriental into desirable residential districts."; The protest sparked a public outcry from opponents of the petition. They scorned the hypocrisy of those who claimed to deplore Hitler's racial policies and yet practiced the same form of racism at home. Supporters of Tong Louie's family pointed out that Vancouver's Chinese community contributed more to the war effort than any other ethnic group in Canada. (Tong's younger brother, Flying Officer Quan Louie, would be killed four years later when his aircraft crashed over Behrendorf, Germany.) Supported by many influential citizens, and by the large network of Hok Yat's friends, and by next-door neighbours who resisted the pressure exerted by other residents, Tong and his wife refused to back down. They began their married life at 5810 Highbury Street.

In 1947, Canadians of Chinese ancestry finally got the vote as well as all rights and privileges previously denied them. Tong was 33 at the time. He went on to become the first Canadian of Chinese heritage to sit on the Royal Bank of Canada's board of directors. He also became a major fund-raiser for the Dr. Sun Yat-Sen Classical Chinese Garden, St. Paul's Hospital Foundation, the Vancouver Symphony, and many other projects. Tong Louie has received numerous accolades and awards, but perhaps none meant more to him than the honour bestowed on his younger brother. On Remembrance Day 1996, a lake in the Capilano watershed north of Vancouver was named Louie Lake in remembrance of Flying Officer Quan Jil Louie, who died on active duty in 1945. 1-55017-231-X --by Joan Givner