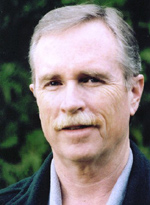 EMPLOYMENT OTHER THAN WRITING: Lawyer

Timothy Perrin is a screenwriter, author and journalist who came to BC from California in 1974 to go to graduate school at the University of Victoria and never left.

In 2007, his screenplay Albatross received the Angie Award for best screenplay at the International Mystery Writers Festival in Kentucky. Co-written with Vancouver-based writer/actor Lance Rucker, Albatross is a romantic thriller that follows a blackmail scheme with worldwide political implications. Albatross was one of five finalists at the festival, culled from close to a thousand entries. With degrees in law and botany, Perrin has written Short-Changed, about ordinary Canadians who were victimized by the failure of large financial institutions. His 1975 guide Exploring by Bicycle was revised in 1980 with Janet Wilson. In addition to two technical books about computer use, as well as Better Writing for Lawyers in 1990.

Perrin has written five books and contributed to a dozen more, created two other screenplays and a TV pilot, as well as authored hundreds of magazine articles. He's interviewed presidents, prime ministers, Nobel Prize winners, and just plain folk. He's worked for the Canadian Broadcasting Corporation's flagship public affairs program As It Happens, been a disk jockey for a Dick Clark-owned radio station, and visited 20 countries on four continents, 31 of the US states and eight Canadian provinces. He's been scuba-diving in the Bahamas, flown sailplanes over the California desert, gone bike-riding with a nudist club in the Netherlands, patrolled with UN Peacekeepers down the "green line" in Cyprus, and crewed a three-masted square-rigger on the Atlantic. He's an expert on the fire ecology of the giant Sequoias of the Sierra Nevada and on "plain English"; legal writing. He has been happily married to his wife Terre since 1992 ... and he claims to know where Buffalo Bill Cody is really buried. He also practices law in Westbank, overlooking Lake Okanagan.