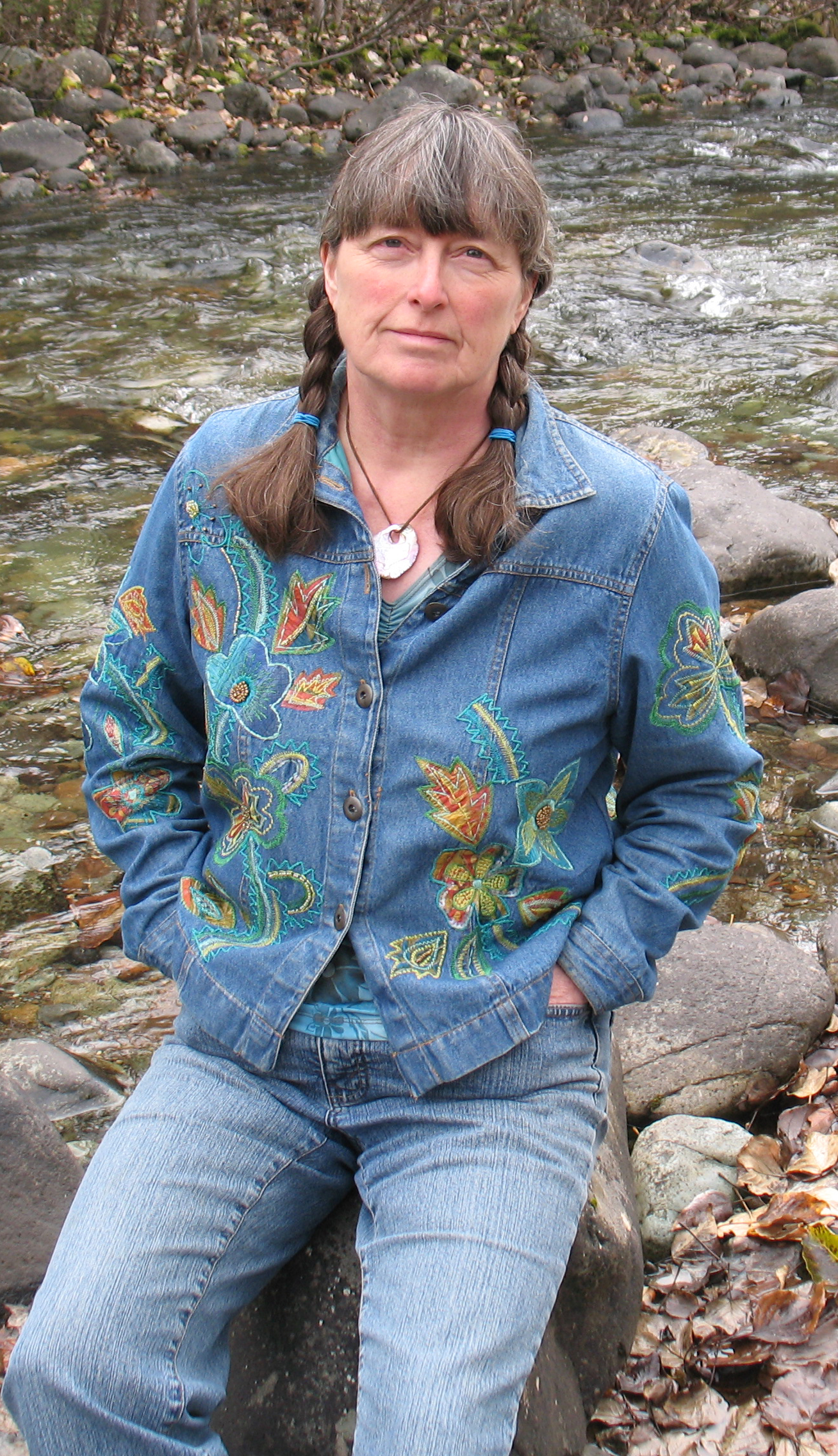 
Sheila Peters has worked as a reporter, weaver, human-rights activist, and English instructor at Northwest Community College, where she also teaches creative writing. Her non-fiction book, Canyon Creek: A Script (1998), was published by Creekstone Press of Smithers, illustrated by Megan Hobson of Smithers. She later collaborated with artist Perry Rath for The Weather from the West (2007). In 2014, Peters published Shafted: A Mystery about an auxiliary cop named Margo Jamieson who investigates a local murder in Smithers with the help of a local historian. The conflicting agendas of an old prospector, a rich eco-activist, and a mess of misplaced desire take the two behind the picturesque faÃ§ade of the town located in a mountainous region of northern British Columbia. The time period is the early 1990s when there are no cell phones or the Internet. The mystery must be solved with the use of old-fashioned paper files, face-to-face meetings and land line-based telephones to unravel a tangled web of festering grudges, phony mineral claims, blackmail and murder.

Peters' stories have appeared in numerous literary journals, including Prism international, Grain, Room of One's Own, and Event. She lives in Smithers, British Columbia. In August of 2014 she started hosting a Smithers Community Radio Show called In the Shadow of the Mountain on Friday mornings from 10:00 - 11:00 on CICK 93.9 FM. Writers talk about and read from their work and share tunes they like with listeners online and in podcasts.


Sometimes fiction is most impressive in technical or abstract terms. It's not the characters that matter most, it's the storytelling, how we feel in the author's hands and how we get through their mazes-stories can literally be 'amazing' adventures of comprehension rather than action.

Car chases count, but life is also a series of Borgesian labyrinths. Many of Sheila Peters' loosely linked ten stories in Tending the Remnant Damage (Beach Holme $18.95) unfold in this manner, like games of lost 'n' found, like contrasting dreams. These dreams often come at us from two voices. Sometimes it's as if two spotlights were set at 180-degree angles, focused on opposite sides of the same sculpture.

When we alternate back and forth between potentially dueling viewpoints, naturally life can seem paradoxical. They generate 'conflicts of interest'-the friction in much of Sheila Peters' fiction-and orientation matters as much as outcome.

A punked-up Vancouver girl accompanies a crusty grandmother on a tense hunting trek in the drizzly woods.

Two old people on a farm contemplate death and the strange goings-on of their neighbours.

Peters' dualism works well when coupled with the clarity of her descriptions and her poetic turns of phrase. Or, put more bluntly, much of the time I had no idea where the stories were going, but I was confident the author did.

In the final story, Breathing Fire, a character named Tomas serves as Peters' narrator; while another character named Jimmy-having been sedated after being badly burned-relives the same story in a state of delirium. Looking into his past, Tomas sees "Something older ... than love. Deeper than anger. It's not a feeling I'm accustomed to, this somehow electric darkness.";

Tending the Remnant Damage is Sheila Peters' first book of fiction, a sometimes mystifying, always challenging work. Into the electric darkness we go, with hands on Sheila Peters' shoulders. 0-88878-417-1


Creekstone Press in Smithers, created by five Bulkley Valley writers, has released a pastiche of archival photos and oral histories pertaining to the eviction of Wet'suwet'en people from their lands in the early 1920s, Canyon Creek, A Script, by Sheila Peters.
"It was written under the shadow cast by British Columbia's Chief Justice Allan McEachern's 1991 decision against Wet'suwet'en and Gitskan claims,"; she says. "I was embarrassed and ashamed when he told these people their lives had no value before our arrival.";

the weather from the west ($24)
Article


Since 1998, Creekstone Press in Smithers has resolutely not operated as a back-to-the-land press that encourages everyone to make log houses or provides home-birthing techniques for cattle.

Run by Lynn Sherville and Sheila Peters, Creekstone has endured for nine years as the lone, ongoing, situated-in-northern-B.C. imprint within the Association of Book Publishers of B.C. ever since the untimely death in 2005 of Cynthia Wilson, who managed Caitlin Press from Prince George.

Caitlin continues to publish writers from central B.C., but its headquarters have shifted to the Sunshine Coast.

Thus far Creekstone has released nine books of non-fiction, fiction, poetry, photography and painting. Theirs is a modest but realistic mandate: roughly one book per year.

Their newest title, the weather from the west ($24), is an overtly artsy book of 42 poems by Sheila Peters and 23 paintings by Perry Rath-a sophisticated "synergistic"; interplay between landscape, heart and mind.

Creekstone books attempt to do nothing less than reflect life in northwestern B.C. from places such as the Bulkley Valley, Smithers, the Hazeltons, Vanderhoof, the Kispiox Valley, Terrace, the Skeena and Bulkley watersheds, the Spatsizi or Tatlatui Wilderness Parks, Haida Gwaii, the Nechako and Fraser watersheds, the Inside Passage and other traditional Gitxsan and Wet'suwet'en territory-almost half the province.

Sometimes, maybe those of us below the 50th parallel should think of ourselves as the sub-boonies.


Making ends meet as an assistant manager of a clothing store in Smithers, 48-year-old Isabel Lee is a recovering alcoholic with three children by three different men. The pivotal experience of her life has been an affair with a young Guatemalan Oblate priest named Álvaro Ruiz, who abruptly disappeared from her life, leaving her pregnant.

In Sheila Peters' first novel, The Taste of Ashes, we also meet Isabel's daughter, Janna, who has gone to Vancouver to complete a degree in accounting at UBC. Her mother steadfastly refuses to tell her anything about her father, the Guatemalan priest.

Father Álvaro Ruiz is a broken man, suffering from hideous flashbacks after imprisonment and torture in Guatemala. Besieged by his memories of betrayal and cruelty, he has taken refuge at the Oblate community of St. Paul's Province in Vancouver.

In The Power and the Glory, British novelist Graham Greene wrote, "When you visualized a man or woman carefully, you could always begin to feel pity."; This is true of Peters' characters. They are all caught in a net of misunderstanding.

Isabel thinks that Álvaro deserted her; Janna despises her mother and fears that she got all her DNA from losers; Álvaro is completely unaware that he has a daughter because his mentor, Father Walter, has never told him.
Peters gradually brings her characters together, unravelling their complex pasts in order to throw light on their turbulent present. There is nothing pat or predictable about this, no sense of a forced happy ending.

Fate, with the active intervention of family and friends, is driving Isabel, Álvaro and Janna together, but the road to confrontation and reconciliation we anticipate is never straight; demons have to be faced, ghosts laid to rest, relationships tested.

We feel compassion for Isabel, Álvaro and Janna because they use their tormented pasts to create at least the hope of a future connection-just as Isabel salvages dormant plants from an abandoned garden to bloom again another year.

Though Peters' debut fiction is rife with suffering and her vivid descriptions of Guatemalan torture can be disturbing, The Taste of Ashes is a redemption song about the resilience of the human spirit.
978-1-894759-77-9

By Margaret Thompson, a freelance writer in Victoria


Sheila Peters' fifth book is a murder mystery set in her hometown of Smithers. Shafted: A Mystery follows an auxiliary cop named Margo Jamieson as she investigates a strange death with the help of a local historian. The town's picturesque façade is sullied by the conflicting agendas of an old prospector, a rich eco-activist, and a mess of misplaced desire in this mountainous region of northern British Columbia.

The time period is the early 1990s when there are no cell phones or the Internet and the death must be solved with the use of old-fashioned paper files, face-to-face meetings and land line-based telephones. Jamieson, the protagonist, must untangle a web of festering grudges, phony mineral claims, blackmail and murder.

Prior to publication, Peters did a week-by-week serial release on her website and read a chapter per week on the Smithers Community Radio station.
Sheila Peters has worked as a reporter, weaver, human-rights activist and English instructor at Northwest Community College where she teaches creative writing. Her non-fiction book, Canyon Creek: A Script (1998), was also published by her Smithers-based Creekstone Press.