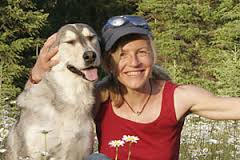 
When Austrian-born Gudrun Pfluger retired from athletics (Mountain Running World trophy winner 1993, 1995, 1996 and 1997) the certified field biologist relocated to Western Canada where she got involved in the conservation of B.C.'s coastal wolf population and studied wild wolves in the Rocky Mountains of Alberta. Diagnosed with an aggressive brain tumor, Pflüger was told she had eighteen months to live. Taking the wolf as her role model, she immersed herself in the wilderness of the mountain ranges of western Canada as an unconventional approach to self-healing--and has survived. Her memoir Wolf Spirit: A Story of Healing, Wolves and Wonder (Rocky Mountain Books 2015) was shortlisted for the 2016 Banff Mountain Film and Book Festival award for Mountain and Wilderness Literature.