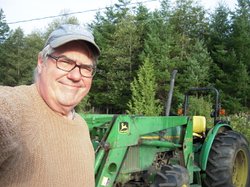 
Born in Kansas City, Missouri on March 3, 1947, Lawrence Pierce of Hornby Island, B.C, was a trial lawyer in downtown Vancouver for 23 years until he moved to Hornby Island where he operates a farm.

He writes: "I did not intend to become a writer. However after employing a number of young people on my farm, it was clear to me that a very basic book on how to use tools and fix things was needed, so I wrote one.

"My career fixing things started at age nine. During my childhood I was lucky enough to have a Dad who taught me the basics. I expanded on this knowledge during high school, by keeping my 1962 Austin Healy running.

"After a brief fling with university in Texas, I got a job as a professional mechanic in Berkeley, near San Francisco. Later, running my own farm in New Brunswick, Canada, I was able to fine tune my skills on the rather decrepit machinery I owned.

"Later, after law school, I launched a 23 year side trip as a litigation lawyer in downtown Vancouver which gave me the skills to research complex problems, assemble the evidence and present the best argument available, based on facts. A world of abuse awaits a lawyer presenting a case in Court without solid facts.

"After retirement from law, I got another farm in B.C.'s Gulf Islands, intending to grow grapes, but the weather got colder, and my curiosity was aroused about the claims that it was getting warmer, when my instincts told me otherwise, so I wrote a second book."

The Art of Fixing Things. Principles of machines and how to repair them (Createspace 2011)

A New Little Ice Age Has Started. How to survive and prosper during the next 50 difficult years (Createspace 2015)