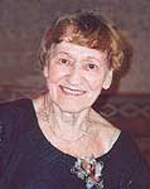 
Elinor Pitchford was an artist before she was a writer. She studied painting in Winnipeg, and had exhibits in Winnipeg and Saskatoon in the 1950s. She began writing in the 1970s, and wrote travel stories published in the Winnipeg Free Press from 1972-79. In 1983, after the death of her husband, she wrote a short story about him called The Lost Chord. This story won second prize in a contest sponsored jointly by the Winnipeg Free Press and the Canadian Authors Association, and was broadcast Canada-wide on the CBC. She wrote prairie and historical articles and poetry, which were published by the Western Producer, Tribune, Perian Springs, and the University of Winnipeg. In 1997, Elinor wrote and published Stories Mamma Told Me and illustrated it with her sketches and family photographs. The collection describes her childhood in Winnipeg and the stories her mother told her about coming to Canada in 1912 from the Ukraine.