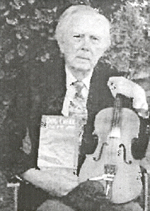 
Born in Huddersfield, England on March 13, 1920, Cariboo pioneer Hilary H. Place died at home in Vancouver on March 3, 2004 having spent the first 40 years of his life as a rancher, cowboy, truck driver, fur buyer and operator of the Dog Creek Stage and Ranchers' Retail store. He married Rita M. Hamilton, a former Williams Lake Stampede Queen, in 1942 and they moved to Williams Lake in 1960 where he operated a music store. In 1970 he came to Vancouver and worked in real estate. An avid hockey fan, he could remember the names of all the players from the Alkali Lake championship team of the 1930s, and watched every Canucks game. He played fiddle, piano and saxophone with the 'Saddle-ites', a family band, from the 1930s until his death. His memoir was Dog Creek: A Place in the Cariboo (Heritage House, 1999). A follow-up manuscript was under consideration for publication, but never appeared.

Articles: 1 Article for this author
Dog Creek, A Place in the Cariboo (Heritage $16.95)
Review


"Who do you think you are, Daniel Boone or something?"; -- a reader

Dog Creek was on the map as a waystation for goldseekers bound for Barkerville even before surveyors designed the Cariboo Wagon Road. But England's comforts were still a world away when Charlie Place arrived and bartered with Indians, trading seed for moccasins, near the turn of the century. Although the Place ranch at Dog Creek boasted the refinements of wallpaper, iron beds and a piano, Mrs. Chase made afternoon tea with kinnikinnick berries and roasted wheat for coffee. Penniless and anticipating his wife's birthday, Charlie Chase once got his courage up and convinced the storekeeper to give him a pound of tea and a tin of jam on credit. "I remember my mother sitting all by herself in the living room that afternoon,"; recalls Hilary Place in Dog Creek, A Place in the Cariboo (Heritage $16.95), "drinking her tea and having bread and jam with tears running down her cheeks.";

Hilary Place lived in Dog Creek for 40 years, then spent another ten years in Williams Lake. Always practical, he regarded horseback riding as "just a painful way to get from point A to point B."; He boiled eggs in a hubcap and created makeshift hockey gear. "We had old automobile skates nailed onto our boots,"; he recalls, "magazines for shin guards, frozen horse buns for pucks and stripped willow branches for hockey sticks."; Eager for an education, he learned Keats, Browning and Shelley in a one-room school from the local schoolteacher, Sheila Doherty, from 1935 to 1937. A few aficionados of Canlit will know Dog Creek was later depicted as Deep Hollow Creek in Sheila Watson's 1959 classic novel The Double Hook, and a subsequent novel called Deep Hollow Creek, because Sheila Watson's maiden name was Doherty. Place later studied Latin and French by high school correspondence courses.

Place's chapter in Dog Creek about meeting his wife Rita Margaret Hamilton reads like a western fairytale. At 16, still recovering after a year with hives, he went to the Williams Lake Stampede with his mother. At an Elks Hall dance, he broke out in hives from the excitement of seeing the Stampede Queen arrive to cheers and clapping. They stood on a bench to get a better view.
"My mother turned to me and said, 'What do you think of her?' 'I think she's beautiful,' I said. 'I think I will marry her some day.' My mother had a big laugh at that, but I had the last laugh because that is exactly what I did seven years later... When I asked her to marry me in 1942 I had nothing. No job, no business, nothing but a saxophone, a fiddle, an accordion, and something less than 50 dollars in my pocket."; Rita sold her share of a beauty parlour and came to live at the Place place in Dog Creek.

The Williams Lake Stampede had begun in 1920 - or 1919, depending who you talk to. Raised in Lac la Hache, Rita was one of the Stampede princesses in 1934. In that year the contestants and their supporters sold tickets; the queen was selected according to the number of tickets sold. Rita was winning until an older admirer of one of the other girls spent all his money on tickets. The following year the organizers asked Rita to run again because she wasn't treated fairly the first time. She won easily. In 1978 there was a reunion of Williams Lake Stampede queens and Rita attended, wearing the same outfit she wore when she was crowned.

Most of Place's friends were Shuswap Natives who lived east of the Fraser River. "They were a friendly group that welcomed the white man and in fact helped the whites cope with the exigencies of the country. The Chilcotins, who occupied the west side of the river, were decidedly unfriendly and did not want the white man on that side of the river at all."; In the chapter called Ranchers Retail, Place recalls Fleasa Harry, a Shuswap who was consulting a shopping list. "I knew Fleasa couldn't read or write, so I was curious to see what she had on the paper. I had to tease it away from her and she finally gave it to me with a shy giggle. It was a shopping list made up of little pictures of the items she wanted - a saltshaker for salt, a matchbox for matches, and so on. It was as effective as a written list as far as I could see.";

Place fondly recalls Alfie Edwards, who was labeled crazy after getting drunk and threatening to shoot somebody. "Of course Alfie wasn't always that crazy,"; says Place. "In fact, he proved to be much smarter than most people realized."; When a family of beavers moved into the Place's creek, flooding the meadow, Alfie was called on to trap them out. Alfie did the job and returned again the following year at Dad's request to kill some more. It took another year or two before Dad got wise to the fact that Alfie was smart enough to leave a pair each time so that he'd always have something to trap the next year.";

Place was prompted to write his memoir after giving a business talk in Vancouver. A young real estate salesman came up to him and said, "Do you expect me to believe you bought fur for the Hudson's Bay Company? Who do you think you are, Daniel Boone or something?";

Place was first employed by an American Christmas tree company, then he operated Dog Creek Stage, Ranchers Retail, Place Music Company and a real estate rental business. He chaired the Williams Lake School District and served on the Williams Lake town council. He was also president of the Chamber of Commerce and president of the Social Credit Party in Williams Lake. "Everybody at age 75 should write a book,"; he says. "Either they'll be a howling success at 80 or they'll have given up the ghost.";