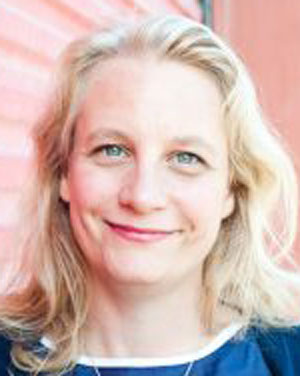 
Emily Pohl-Weary is a novelist, poet, and magazine editor. She is the granddaughter of science fiction writers and editors Judith Merril and Frederik Pohl. She was born in Toronto, Ontario in 1973. She is currently Assistant Professor, Master of Arts in Children’s Literature Program at UBC. Her most recent book is Ghost Sick (Tightrope Books, 2016), poetry about tragedy and resilience in the Toronto neighbourhood where she grew up. Canada's Parliamentary Poet George Elliott Clarke reviewed it in the Halifax Chronicle: "Like Holocaust witness poet Paul Celan, Pohl-Weary checks tabloids, billboards, newsflashes, for the language to bespeak domesticated violence."

Pohl-Weary's first novel, A Girl Like Sugar, was published by McGilligan Books in 2004.[7] It features a twenty-something girl haunted by her dead rock star boyfriend. She also edited a critically acclaimed female superhero anthology, Girls Who Bite Back: Witches Mutants, Slayers and Freaks (2004). Her subsequent books include a collection of poetry, Iron-on Constellations (2005) and the novel Strange Times at Western High (2006), featuring zine-publishing teen sleuth Natalie Fuentes, who teams up with a computer hacker and a graffiti artist to solve crime at her Toronto high school, and the young adult novel Not Your Ordinary Wolf Girl (2013), about a musician who gets bitten by a vicious dog in Central Park and finds herself changing in unusual ways.

In 2008, Emily founded the Toronto Street Writers, a free writing group for inner-city youth in the neighbourhood where she grew up. For three years, she led a weekly writing workshop for residents of Sagatay (Na-Me-Res), a long-term transitional home for First Nations, Metis and Inuit men in Toronto. Her writing workshops focus on writing skills, creative empowerment, learning tools for conflict-resolution, and drawing out participants' unique voices and stories.

For eight years, Pohl-Weary published and wrote for Kiss Machine magazine, which ceased publication in 2008. She is also a former editor of Broken Pencil magazine.