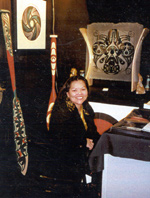 
Born in Alert Bay in 1952, Susan Point is one of the few female carvers of Aboriginal art and one of the most successful Aboriginal artists of British Columbia. She grew up on the Musqueam Band reserve, near the mouth of the Fraser River, until she was sent to the Sechelt residential school at age nine and kept away from her family for five years. She worked in a cannery with her mother until moving to various secretarial positions. In 1981, at the age of 29, Point enrolled in a six-week jewellery-making course at Vancouver Community College. Later Michael Kew, a UBC anthropologist, helped Point learn about her Coast Salish artistic heritage. She has had her work in dozens of exhibitions since 1982 and received an honorary doctorate from the University of Victoria in 2000. Point often works on large-scale productions, collaborating with architects and developers, such as a major installation of house posts to welcome visitors at the Vancouver International Airport. There have been numerous publications in association with her exhibitions, as well as a book edited by Gary Wyatt, Coast Salish Artist (D&M 2000). "Coast Salish art," she has written, "is relatively unknown to most people today as it was an almost lost art after European contact-the reason being is that Salish lands were the first to be settled by the Europeans which adversely affected my people's traditional life cycle.... Because of this, over the years, I have spent a great deal of my time, as a Coast Salish artist, trying to revive traditional Coast Salish art."

Coast Salish Art was published to coincide with a Vancouver exhibition of 38 pieces ranging from jewellery to the monumental in November of 2000. Each of the 50 works of art reproduced in full colour is accompanied by a statement from Point on its meaning or the process involved in making it. There is also a chronology of Point's exhibitions and commissions along with essays by Kew on traditional Coast Salish art, by Peter MacNair on the art of Susan Point, and by Bill McLennan on three of Point's monumental carvings. The sacred and private character of an image revealed in dreams or visions-either threatening or beneficial-is an integral part of Coast Salish heritage. Frogs are important symbols for Point, as a memory of childhood when the Musqueam people would listen for the singing of frogs as a sign of coming spring. One of her pieces, 'Singing the Season,' shows five carved frogs with silver domes for eyes, above a face cast in brilliant green cotton paper and trimmed with cedar bark rope. With development and urbanization, the song of the frogs is harder to hear, and sometimes entirely silent.

Robert D. Watt's book with and about Susan Point, People Among the People: The Public Art of Susan Point (Figure 1 with the Museum of Anthropology at UBC, $50) has won the 2019 City of Vancouver Book Award on October 19.

Watt tells the story of each piece of the Coast Salish artist's public art, ranging from her cast iron manhole covers in Vancouver, to cast bronze faces in Whistler, to massive carved cedar portals in Stanley Park, to moulded polymer murals in Seattle. Watt conducted interviews for the stories and he had extensive access to Susan Point's archives to describe the evolution of her public artworks. Often, he cites Point's own words.

Susan Point has been credited with reviving the traditional Coast Salish art style, once almost lost due to the impact of colonization. Now, the aesthetics of peoples living around the Salish Sea can be seen around the world, often in modern materials that Point has embraced, but also in the works of a new generation of artists she has inspired.

At the award ceremony on the Central Vancouver Public Library's recently opened 9th floor, with views over a rooftop garden designed by the landscape architect Cornelia Oberlander, Watt recalled the days before Susan Point's renaissance started, when he worked at the Vancouver Centennial Museum (now the Vancouver Museum) as curator of history. He was looking for artwork that represented the local Coast Salish and asked his secretary, who was from the Musqueam First Nation, if she knew anyone.

"I have a niece who draws," she told Watt. That was Watt's introduction to Susan Point, who was not at all well-known at this time. She has since become a major Canadian artist, known around the world.

In her long quest to re-establish a Coast Salish footprint in Southwest British Columbia and the Pacific Northwest of the U.S., Point has received many honours, including the Order of Canada, a Queen Elizabeth II Diamond Jubilee Medal and the Audain Lifetime Achievement Award; and honorary doctorates in Fine Arts from UBC, SFU, the University of Victoria and Emily Carr University of Art and Design.

The other finalists were: Philip Huynh for The Forbidden Purple City (Goose Lane), Eve Lazarus for Murder by Milkshake: An Astonishing True Story of Adultery, Arsenic and a Charismatic Killer (Arsenal Pulp), Susin Nielsen for No Fixed Address (Tundra) and Shazia Hafiz Ramji for Port of Being (Invisible Publishing).

Christie Lee Charles, Vancouver's Poet Laureate (2018 - 2021), gave a traditional Musqueam welcome to open the event, which was emceed by Sandra Singh, the City of Vancouver's general manager of arts, culture and community services. Vancouver Public Library's chief librarian, Christina de Castell moderated a round of discussions from each author about their shortlisted book. 9781773270425

Articles: 1 Article for this author
From secretary to Coast Salish maven
Review (2014)


Coast Salish artist Susan Point's monumental 3-D public art pieces in glass, cedar, metal and other materials greet visitors to the Vancouver International Airport and travellers on BC Ferries. They adorn museums, theatres, plazas and office buildings here and around the world. Her artworks have been included in dozens of exhibitions since 1981. An elegant new book, Works On Paper (Figure One $29.95) has now appeared exclusively about Susan Point's printmaking, the 2-D limited-edition art form she values as "my real body of work."; It features 169 of the first 320 prints she has made. We asked Caroline Woodward to review the book.

"For me, my prints are my fingerprints; they reveal my thoughts and feelings on paper."; - Susan Point

And so Susan Point acknowledges that all her work, in every material, is connected to the common foundation of her printmaking. She loves the process, the simplicity and the experimentation involved with pulling each print by hand, after making drawings in black and white first, to reveal the stark contrast of her essential design.

Susan Point was born into a family of Musqueam "People of the Grass"; weavers at the mouth of the Fraser River, surrounded by the intricate baskets of her foremothers. Her earliest prints interpreted the carved designs on stone, bone or wood spindle whorls.

Gary Wyatt in his introduction notes that it was Point's ability to weave traditional forms and new story metaphors-to continually experiment with scale, materials and methods-that established her as a major talent very early in her career. Prestigious high profile commissions followed and her husband, Jeff Cannell, and their four children, Brent, Rhea, Thomas and Kelly, all of whom are established artists, often collaborate with her on public art pieces and some prints as well.

As a printmaker, she has mastered an array of techniques, making variations on woodblock prints, serigraphs, lithographs and mono prints, sometimes using handmade paper, intaglio, aquatint, gold embossing and other techniques to steadily create a number of new prints every year.

Dale Croes, the third contributor of text to this book, is an archaeologist and professor at Washington State University who specializes in excavating waterlogged Coast Salish sites in the Pacific Northwest. He provides fascinating critical details which link Point's printmaking to specific well-preserved ancient elements (Point and Cannell have toured a major excavation site in Musqueam territory with Croes). The intricate checker-weave used in large pack baskets over three thousand years old is utilized in her 2003 woodblock print, Sacred Weave, for example.

Recovered items from flooded or mud slide-covered village sites like cedar bark string gill nets, twisted cedar harpoon lines, wooden hair combs and mat creasers, yarn spools, weavers' batons, double bar looms (aka 'true' looms) and spindle whorls have all made their way into her 2-D works. No less than seventy of her prints explore the form and carvings of the spindle whorl.

In the Americas, only the Incas of Peru domesticated alpacas for easier access to their wool and the Salish Sea peoples of the Central Pacific coast domesticated "wool"; dogs. The Tlingit weavers in the North collected mountain goat wool to make their prized Chilkat blankets on hanging looms, a much more arduous task.

Dale Croes believes that Susan Point pays homage to those industrious wealth creators, the women weavers whose blankets were a primary barter item and visible sign of well-being, by incorporating and transforming their spindle whorls in her own art. She made Flight as a print in 1995 and as a 17-foot carved red cedar spindle whorl commissioned for the International Terminal at YVR in 1994.

We can be grateful that Susan Point's potential was spotted early and that she left her career as a legal secretary behind when George (Bud) Mintz of Potlatch Arts in Vancouver first saw her work and actively encouraged her, assisting with commissions and undertaking local, national and international exhibitions of her serigraphs. Mintz saw in her the "talent and drive to revitalize the Coast Salish art form in the 1980s when it did not have the degree of success it now enjoys.";

This gorgeously produced book is dedicated to Bud Mintz, a testament to his early recognition that Northwest Coast art is beautiful and culturally significant.