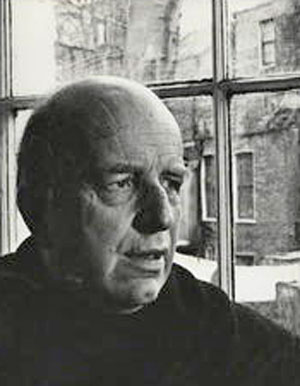 
Paul Hugh Howard Potts (19 July 1911 - 26 August 1990), scion of an important BC family, was a writer of international repute though he is unknown in BC today.
Born in Datcet, Berskshire] to (Arthur George) Howard Potts (1869-1918), who had emigrated to Victoria, where he was a partner in a bakery and confectionery business and his Irish wife Julia Helen Kavanagh (also recorded as Cavanagh), Potts was educated in BC, England and Italy (at a Jesuit college in Florence) but from the early 1930s he lived in London. Considered a rare English example of the continental species of outcast writer known as poete maudit, he frequented the seedy Soho district where he would sell broadsheet copies of his poetry in the streets and pubs, anticipating the practice of later BC poets such as bill bissett and Peter Trower. Arthur Potts's father, Dr Walter Jeffery Potts (1837-1898), had married Julia, daughter of Sir Thomas Braithwaite Beevor, 3rd Baronet of Blatherworth, and many descendants with the name 'Beevor-Potts' once lived on Vancouver Island. One of the more prominent was Lionel Beevor-Potts, a police magistrate in Nanaimo 1945-64 known for his harsh rulings and salty language. His most famous trial was that of the cultist Brother 12.

Among Potts's literary friends were George Orwell and the English poet George Barker, who had BC connections through his mistress Elizabeth Smart, whom he visited while she was living in Pender Harbour writing her famous cri de couer By Grand Central Station I Sat Down and Wept. Potts's memoir of Orwell, "Don Quixote on a Bicycle", appeared in The London Magazine in 1957 and became a chapter in his memoir Dante Called You Beatrice. His 1948 essay "The World of George Barker"; appeared in Poetry Quarterly and a selection of his writings was published in 2006 by Breton Books of Nova Scotia.

In late middle-age, Potts was '...balding' with 'a stutter that he mixed with rapid blinking and an amused chuckle as he started a sentence', eventually becoming a dissolute figure 'barred from Soho pubs'. Potts died in 1990 of smoke inhalation from a fire in his bedroom; he had been house-bound for some years by this time.

-- KnowBC.com, property of Harbour and the copyright holders.