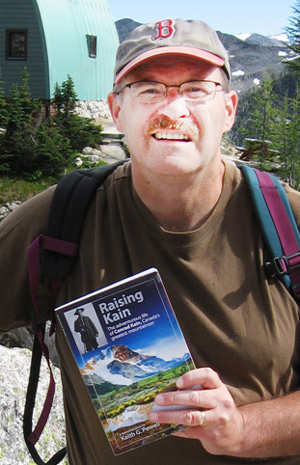 
Living in the Shadow of Fisher Peak by Keith G. Powell, published by his Wild Horse Creek Press in 2009, is an historical novel about Jack Fisher which reflects the overall spirit and experience of the frontier of the wild west. John S. Fisher---Jack to everyone who knew him----became one of the Kootenay's and Flathead's most colorful characters. In 1849, sixteen year-old Jack Fisher, of Philadelphia, headed for the rich goldfields of California, across the barren mid-west, enduring hardships every step of the way. Gold fever eventually drove him north to the banks of Wild Horse Creek in Kootenay country, where he finally claimed his fortune only to lose it as quickly as he found it. Jack Fisher was one of thousands of gold seekers who not only hoped to strike it rich but also eagerly embarked on an exciting search for a better way of life.

In 1909, twenty-five year-old Conrad Kain, from the tiny Austrian village of Nasswald, boarded the CPR ship Empress of Britain en route to the Canadian Rockies where he became the first official mountain guide of the newly formed Alpine Club of Canada (ACC). Keith Powell's second historical novel, Raising Kain (Wild Horse Creek Press 2011), recounts Kain's remarkable adventures in Canada, mainly in the Rockies, but also around Wilmer in the Columbia Valley. Kain lived in Wilmer (just north of Invermere) for almost 20 years and died in Cranbrook's St. Eugene Hospital in 1934. He made almost 70 first ascents or new routes on peaks in the Rockies to go with 59 ascents (29 first ascents) in New Zealand. He is widely recognized as "the prince of Canadian mountain guides."

Keith G. Powell is a life-long resident of the Kootenays and the publisher of Koocanusa Publications Inc., in Cranbrook. He is the founder of Kootenay Business magazine.