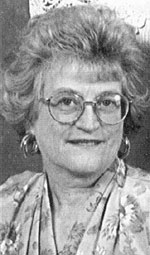 
Itinerant Baptist evangelist Margaret Fishback Powers of Coquitlam turned herself in a commodity as a travelling lecturer on the strength of an inspirational poem called 'Footprints' that she says she composed in 1964. "One night I dreamed a dream / I walking along the beach with my Lord..." etc. The poet notices two sets of footprints throughout various scenes of her life, more or less like Scrooge with the Ghost of Christmases Past and Future, but she is deeply saddened when she sees only one set of footprints in the final scene. She asks the Lord why He has deserted her. He replies, "I love you and I would never leave you / Never, ever, during your trials and testings. When you saw only one set of footprints / It was then that I carried you." There are various versions of this short poem, usually credited to 'anonymous'. Margaret Fishback Powers claimed she wrote the poem for her wedding in 1964 and also claimed she once had a post-office-dated, sealed envelope that she sent to herself to prove ownership but it had become lost. She claims her boxes of poems, including Footprints, were stolen from a moving truck that was bringing her family belongings from Toronto to British Columbia in 1980. Hallmark, the greeting-card company, agreed to her ownership claims in the late 1980s. The Lord works in wondrous ways. She receives an annual fee from Hallmark. She has continued to publish spin-off titles while touring as the co-director of Little Peoples Ministry. Her husband and co-director Paul Powers was ordained by the Moody Bible Institute in Chicago after he murdered a woman for $500. See Paul Powers entry.