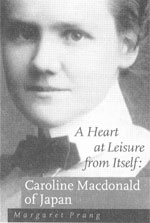 
Founding editor of the journal BC Studies, Margaret Prang served as president of the Canadian Historical Association and was one of the three ongoing judges for the Eaton's Book Award. As a UBC-based historian, she published a biography of N.W. Rowell and a biography of Caroline Macdonald, a Canadian-born missionary in Japan. Once asked to the write about Macdonald in 1963, Prang declined. Her interest was later piqued by the memoirs of Hugh Keenleyside, the Canadian diplomat who served in Tokyo during the late 1920s. In the course of writing A Heart at Leisure from Itself: Caroline Macdonald of Japan (UBC Press, 1995), Prang learned that Macdonald was born in Wingham, Ontario in 1874, studied mathematics and physics, went to Japan in 1904 to help establish the Young Women's Christian Association (YWCA) and stayed to prompt prison reform and feminist causes. During the 1920s she was the best-known foreign woman in Japan. She died in 1931.

Review of the author's work by BC Studies:
A Heart at Leisure from Itself: Caroline Macdonald of Japan