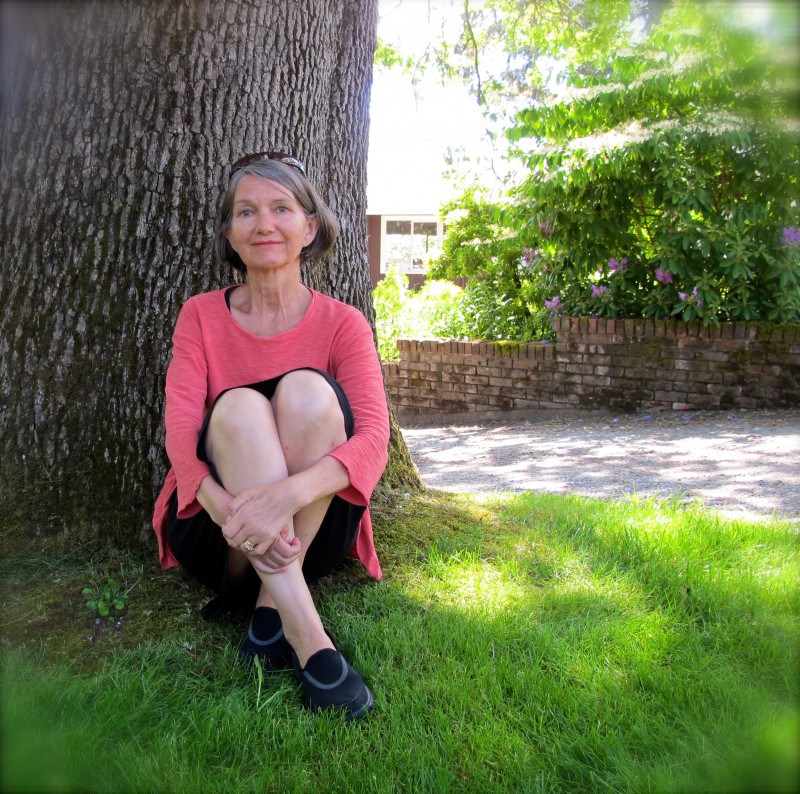 
A Rock Fell on the Moon: Dad and the Great Yukon Silver Ore Heist (Lost Moose / Harbour $32.95) by Alicia Priest is a poignant family story that reveals a little-known vein of Yukon silver mining history beyond the well-worn yarns of Klondike gold. It's a ripping good read, according to reviewer Caroline Woodward.

Review of the author's work by BC Studies: A Rock Fell on the Moon: Dad and the Great Yukon Silver Ore Heist

Alicia Priest can still recall being uprooted from a comfortable and loving home in the remote mining village of Elsa, three hundred miles north of Whitehorse, as a bewildered ten-year-old.

Suddenly she was living with her mother, grandmother, sister and one dog in a dank East Vancouver basement suite. On her first day in the big city elementary school, Alicia Priest was asked by another grade five student if her father was the "Yukon guy in the news.";

Well, yes, Gerald Priest was one of two alleged thieves who were charged with the biggest theft of silver ore in Canadian history. But the bright little girl knew just enough about her mother's silence and father's absence to lie about her Dad's identity on that day.

It has taken Priest almost a lifetime to uncover the truth. Her A Rock Fell On The Moon: Dad and the Great Yukon Silver Ore Heist offers two versions of an almost-perfect crime, and a compelling analysis of her family at the centre of the mystery.

Gerald Priest, the Chief Assayer (senior chemist) for United Keno Hill Mine, third richest producer of silver in the world, never publicly admitted to his role in the theft of 671 bags of ore that were 80% silver. Estimates vary radically as to its value, but it's likely more than $2 million in today's currency.

Did it come from piles of ore left temporarily, for tax reasons, in an unused mine tunnel? Or did the unusually rich silver come from a giant boulder found on the claims Gerald Priest staked on barren ground known as the moon, hence the wonderfully apt title of the book?

While he lived, Gerald Priest didn't disclose anything to his daughter except increasingly far-fetched stories. She has subsequently applied her journalistic research and interviewing skills to hundreds of letters, newspaper stories, RCMP files and investigators, court documents, the Yukon Archives, lawyers, geologists and former mine employees.

Alicia Priest began her investigation in 2011, after both parents had died, not an uncommon practice for authors who must outflank and outlast any confrontation with guilty parties, accusations of hanging out dirty laundry for profit or, when dealing with the innocent and wronged, to kindly spare the feelings of these most powerful of censors.
Then, in 2012, Priest was diagnosed with ALS (Lou Gehrig's disease). This terminal diagnosis added new urgency to the task at hand, as it would do to any writer contemplating a memoir or novel.

"I received the ultimate deadline... a mother of a terminal illness,"; says Priest in an interview. "I had to start there and then while I could still talk, type, eat and walk somewhat normally. With tremendous organizational help from my husband, [journalist] Ben Parfitt, I wrote and rewrote and then rewrote again for fourteen months.";

Heart-breaking, hilarious and suspenseful, hers is an impressive achievement-alternately unearthing an audacious mining mystery, taking us down into the mine itself, to the dark psychological twists and turns within her family and describing life in the mining village of Elsa, and evoking Priest's ten years of perfect childhood.
Gerald Priest was a baffling man-funny, affectionate, well-read, at home in the bush and at the boardroom table, but also petty, devious and cruel. He preferred children-and men and women for that matter-who laughed at all his jokes and didn't question his decisions.

Helen Friesen was a Mennonite Russian refugee from Stalinist purges and Nazi aggression. After finding passage for herself and her mother to Canada, she became engaged to Gerald Priest after a two week courtship, prefaced by several months of pen-pal correspondence, sight unseen. (She kept every single telegram and letter he ever wrote her, nearly 300 of them, while he tore up or burned nearly all of hers.)

This lively, fashionable young woman from the relatively bright lights of Vancouver, circa 1951, only made the move to Elsa, Yukon, population approximately 600 souls, after Gerald agreed to a package deal. Helen's mother had to come along, too.
Each chapter of the book is prefaced by a quote from Robert Service. Amongst the Yukon Bard's doggerel verse are zinger nuggets of philosophy and psychology.
"Perhaps I am stark crazy, but there's none of you too sane; it's just a little matter of degree.";

It's easy to imagine the bespectacled boy who would mastermind the great Yukon silver heist reading all Jack London's adventure novels and memorizing lines of Service's poetry. But chance rolled snake eyes on a Friday morning in June, 1963.

Problems arose only after the driver of the flatbed truck that was loaded with bags of purloined ore took a wrong turn and had to ask for directions He parked outside the Elsa Cookhouse (barber shop, beer parlour and library) and bought cigarettes and coffee, asking how to reach the main road south.

Unfortunately the mine manager happened to look out his window and see the truck. Fridays weren't ore-moving days... and, hey, it was a Friday!

What followed were the most expensive trials ever held in the Yukon. The legal elements include a mysterious Third Man who was never charged, or ratted out by the two men who were; the no-longer legal burden of reverse onus (meaning the men charged were guilty until they could prove otherwise); and the intervention of lawyer Angelo Branca who bowed out from representing Gerald Priest after being appointed a Supreme Court judge, an untimely honour which likely sealed Priest's fate.

This is a consummately well-written book, achieving the near-impossible feat of maintaining a journalist's objective distance while literally tracking her father's fifty-year-old footsteps and disclosing painful family secrets with restraint and dignity.

Caroline Woodward is the author of Penny Loves Wade, Wade Loves Penny (Oolichan 2010), a novel set in the Peace River.

It is with sad hearts that we announce the passing of Alicia Priest, long time journalist and Victoria-based author of the recently released A Rock Fell on the Moon: Dad and the Great Yukon Silver Ore Heist. Alicia passed away on Tuesday, January 13.

Alicia was diagnosed with ALS in 2012. At the time, she had already begun her research for her first book, but her diagnosis was "the ultimate deadline"; to finish it. She quit her job and dedicated herself to telling her family's story while she was still healthy enough to write it.

ALS stands for amyotrophic lateral sclerosis, and Alicia has described it as a relentless, muscle-destroying mutation that results in total body paralysis and death. It's considered a rare disease, and even today, it has no cure. Alicia's excitement about the process of writing her book overshadowed the progression of the disease, but she decided that all author royalties from its sale were to go to the ALS Canada, as well as the Canadian Wilderness Society.

A Rock Fell on the Moon is a memoir in which Alicia conducts her own investigation into the infamous theft committed by her father, Gerald Priest, in the small Yukon mining town of Elsa in the 1960s: Gerry stole $160,000 worth of silver ore out from under the nose of one of the largest mining companies in Canada. He didn't get away with it, and his family could only watch aghast as the idyllic life they knew crumbled around them.

Not only did Alicia meet her deadline, she saw the book published, and witnessed its subsequent wild success. She was able to attend multiple book events and sign books while her husband, Ben Parfitt, and her daughter, Charlotte, read for packed bookstores. Alicia's memoir is a fantastic story, and we are so honoured to have been able to publish it, as well as to work with Alicia and Ben in the process.