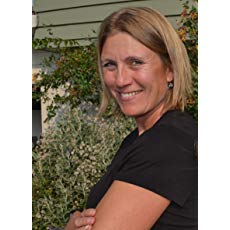 
Elspeth Rae co-authored Meg and Greg: a Duck in a Sock (Orca 2020) with Rowena Rae, the first book in a series designed for shared reading between a child learning to read and an experienced reader. The stories have special features that help children with dyslexia or other language-based learning difficulties find reading success.

Elspeth Rae has a B.Ed from SFU and is a certified Orton-Gillingham teacher for children with dyslexia and other language-learning difficulties. Elspeth was diagnosed with dyslexia at age eight. She lives in Vancouver.

Meg and Greg: Frank and the Skunk
by Elspeth Rae and Rowena Rae; illustrated by Elisa Gutierrez
(Orca $14.95)

Rowena and Elspeth Rae grew up in a house that was full of books. It was Rowena and their mother who were the strong readers, as they always had books on the go. "Going on holiday for two weeks usually meant bringing along a separate suitcase dedicated to books!" says Rowena.

While Elspeth and their father loved books and stories too, they found reading more challenging. Elspeth enjoyed being read to, and used to lug cassette-taped books around before the days of Audible.com.

Eventually, at the age of eight, Elspeth was diagnosed with dyslexia, which led to her receiving Orton-Gillingham instruction during her school years, an approach developed by Samuel Torrey Orton (1879–1948) and Anna Gillingham (1878–1963) for teaching literacy to those for whom reading, writing and spelling does not come easily.

"Our father was never diagnosed, probably because testing wasn’t prevalent in the 1930s when he was a child," says Rowena. "But I remember him saying that his mother read his medical textbooks out loud to him in university."

But their father did eventually become a confident reader and he went on to write for his job. "He always had reading material in his back pocket, usually a news magazine," says Rowena. "Both of our parents wrote extensively in their healthcare careers and our father continued to write articles and stories throughout his retirement, virtually until the day he died."

Elspeth went on to earn a B.Ed. from Simon Fraser University and become a certified Orton-Gillingham teacher for children with dyslexia and other language-learning difficulties in Vancouver.

Rowena worked as a biologist in Canada and New Zealand before becoming a Victoria-based freelance writer, editor and children’s author of both fiction and non-fiction.

It was Elspeth who had the idea to write books for struggling readers after she became frustrated with the books available for her students. She decided that writing her own stories was the best solution for meeting her students' needs.

As Rowena already had experience writing books, Elspeth approached her with the idea to work collaboratively on books for special needs children. They spent nearly three years developing their concept, writing stories, testing them with students, and revising the concept, guiding principles, text and design. The final result was a book with graphic stories featuring the characters Meg and Greg, two ten-year-old best friends.

The stories begin at the stage where a child reader recognizes the individual letters of the alphabet and knows their most common sounds (all the basic consonant sounds, including consonant blends, and the short vowel sounds). The plan was for a series of books such that each story introduces one letter combination or phonogram (like th or ck) in a particular sequence derived from Orton-Gillingham.

"We initially submitted a book proposal to half a dozen Canadian and U.S. publishers," says Rowena. "We received rejections across the board, but several of the publishers replied to us with encouraging comments about our book concept. We then decided to self-publish."

They teamed up with Vancouver-based illustrator Elisa Gutierrez "who brought our stories to life on the page," says Elspeth. "After learning a lot about book production, we launched our first book, A Duck in a Sock, in 2017. We got a phenomenal response from teachers, parents and students.

"One eight-year-old boy told us he loved the stories so much that he slept with the book under his pillow; and another girl carted the book all around Europe on a family vacation.

"With this type of response, we connected with Liz Kemp, a fiction editor at Orca Book Publishers, and signed a contract for Orca to reprint the first book and then to continue the book series with three additional titles."

Rowena and Elspeth have followed up their first book with the publication of Meg and Greg: Frank and the Skunk (Orca $14.95), in which Meg and Greg go to a summer camp and have a run-in with a skunk, sing a silly song about a king, go on a canoe trip that has one glitch after another, and make a mess in the lodge with a fresh batch of fudge. These words were chosen as they focus on the phonograms: nk, ng, tch and dge.

More books are already being planned in the Meg and Greg series. All are for shared reading between a child who is learning to read and a more experienced reader. The latter could be a teacher, tutor, reading volunteer, parent, grandparent, buddy reader or even a sibling. Shared reading means the stories have text at different levels of difficulty and this allows the stories to be more complex and more likely to interest an older child, while still giving a learning reader a chance to read part of the story.

Other "dyslexia-friendly" design elements in the Meg and Greg books include shaded paper to cut down on contrast, a font that mimics printed letters, extra spacing between words and lines, and illustration labels printed mainly in lowercase letters.

The stories have graphic novel/comic book elements as such features are popular with children. Book three in the series is in production and will be available in fall 2021. Rowena and Elspeth are currently writing book four.

"We have ideas about future books both in the Meg and Greg series and possibly for a 'prequel' series for readers who are at the stage of learning the basic sounds of the individual letters of the alphabet," says Elspeth.

"Apart from the gratification of creating books that are making a real difference for many kids and their families, the best thing about the two of us working together is how much closer it’s brought us. We’ve always been close as friends and sisters but now we're business partners and co-authors as well, and this has been truly phenomenal." 978-1-4598249-3-5 [BCBW 2021]