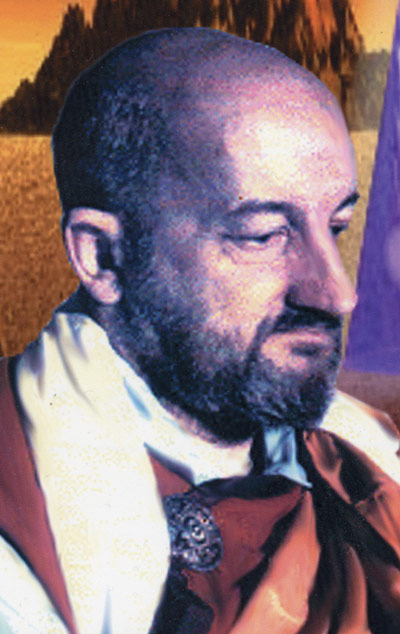 A charlatan who gained international success as the author of esoteric bafflegab, T. Lobsang Rampa launched one of the greatest literary hoaxes of the 20th century with the publication of The Third Eye in 1956. The first-person narrator is a Tibetan physician with the psychic ability to read human auras via a third eye sited vertically in his forehead. Rather than present The Third Eye as fiction, Rampa stuck to his Tibetan lama identity and laughed all the way to the bank. He once wrote about his travels by flying saucer from Tibet to a paradise on Venus, but he never mentioned his two-year stay in Vancouver.

In the early 1970s, T. Lobsang Rampa (not his real name) and his entourage took refuge atop the 35-storey Denman Inn at English Bay where he led a hermit-like existence, making occasional wheelchair forays to Denman Place Mall. He usually wrote in bed, closely monitored by his Siamese cats. News of Rampa's secretive Vancouver residence only came to light with the publication of his secretary Sheelagh Rouse's memoirs, Twenty-Five Years with T. Lobsang Rampa (Lulu Books, 2005).

Articles: 1 Article for this author
Rampa on the run
Article


It is a little-known fact that sometime in the early 1970s, the self-designated guru Lobsang Rampa and his entourage lodged for about two years at the Denman Place Inn (as it was then known) in Vancouver's West End.

The upper floors hosted residential suites with expansive views over English Bay. The self-designated guru Lobsang Rampa stayed close to the top of the 35-storey building where he led a hermit-like existence, making occasional wheelchair forays to Denman Place Mall. It's possible he composed one or two books during his stay. He usually wrote in bed, closely monitored by his Siamese cats.

Lobsang Rampa (not his real name) was a refugee of the celebrity kind, on the run from news hounds. While he revelled in the attention he got from his books, he hated to be recognized in person. That's likely because he built his reputation under the persona of a Tibetan lama-physician purporting to be the author of a tome called The Third Eye.

The first-person narrator is a Tibetan physician with the psychic ability to read human auras-via a third eye sited vertically in his forehead.

Rather than present The Third Eye as fiction, Rampa stuck to his Tibetan lama identity like Velcro-in the interest of generating greater sales figures. The ruse worked-Rampa laughed all the way to the bank by writing more books about his travels in Tibet and other weird realms. His books developed a huge cult following, selling in the millions-by one count, over five million; by another count, over twelve million to date.

But in person, the illusion didn't quite hold up. Rampa did not look even remotely Tibetan-and he spoke not a word of the language. There were a number of Tibetologists in London who were keen to expose this charlatan by reminiscing about their time in Tibet. Among them was Heinrich Harrer, author of Seven Years in Tibet and fluent in the Tibetan language.

Rampa was not so keen to meet the Tibetologists. The curious were informed that he was either seriously ill, or on a lengthy meditation retreat-and could not be disturbed. A news story eventually broke revealing Rampa as Cyril Henry Hoskin, the unemployed son of a plumber from Devonshire.

Rampa weaseled his way out of monstrous contradictions in a later book by claiming that his English body had been 'possessed' by the spirit of a Tibetan lama. That happened on a Tuesday, when he fell out of a tree, thus explaining his full nom de plume: Tuesday Lobsang Rampa (wisely abbreviated as T. Lobsang Rampa in his works).

When news of Rampa's real identity came to light, the Rampas promptly decamped from London to a fort-like structure on the coast of Ireland, overlooking the sea. They were under virtual siege from members of the press, who tried to spy over the walls through periscopes and went through their garbage.

Fed up with this kind of attention, the Rampa entourage flew to the east coast of Canada, spending some time roving around Ontario, Quebec and the Maritimes. Then they decided to shift to the west coast.

At the helm of the Rampa entourage was haughty Sarah Rampa, his wife-a former nurse who handled both business and Rampa's frail health. In the role of companion and secretary was Sheelagh Rouse, a pretty young woman who came aboard in Ireland-on the lam from a marriage that didn't work out (there was some speculation in the press of the day about whether her involvement was more than secretarial). And there were several Siamese cats, which the Rampas doted on, preferring feline company to human. This had side-benefits. According to Rampa, his Siamese cat Fifi Greywhiskers telepathically dictated an entire book to him, which he diligently translated from the 'Siamese cat language' into English. The book is called Living with the Lama.

It is through the eyes of Sheelagh Rouse that Rampa's Vancouver interlude comes into focus-described three decades later in a book called Twenty-Five Years with T. Lobsang Rampa (Lulu Books, 2005). According to her, Rampa liked the water views in Vancouver, but he found the people less than friendly-and definitely not cat-friendly (the entourage failed to find a suitable rental apartment that would accept cats).

By the 1970s, Rampa was suffering from chronic health problems and got around in a wheelchair. He railed against Vancouver's lack of wheelchair access, and railed against 'women's libbers' and teenagers. But the last straw was fans chasing him along the streets of the West End (he pretended not to be Dr. Rampa when accosted).

Eventually, the Rampas moved to Calgary, where they were left in peace for a lengthy stretch of time-over six years. Rampa even dedicated a book to the city of Calgary. In 1980, Sheelagh Rouse had a falling-out with Rampa and left in a huff-taking up employment in Vancouver. Rampa promptly disowned her. Rampa died in Calgary in 1981. His lucrative royalties were apparently donated to several cat organizations in Canada and the US.

Death usually puts a crimp in the output of most authors. Not so Lobsang Rampa. His books continue to sell and sell, with The Third Eye remaining his most popular title. He even managed to produce a book posthumously. It is called My Visit to Agharta, about his foray to the subterranean Himalayan realm of Agharta. The book was cobbled together from supposedly long-lost papers belonging to Rampa, and published in 2003-over ten years after his death. To this day, librarians are mystified where to shelve Rampa's books-under religion, occult, paranormal, thriller, sci-fi or autobiography. The best solution yet seen: file them under 'New Age.'

T. Lobsang Rampa is profiled in Michael Buckley's recent book Eccentric Explorers: Unravelling the Mysteries of Tibet-Wild and wacky Adventurers of the Tibetan Plateau. The book views the rich culture and history of Tibet through a rather unusual lens-through the eyes of ten eccentric adventurers bent on unlocking its secrets.
Eccentric Explorers is available from www.chapters.indigo.ca or from www.itmb.ca

Buckley is author of several books on Tibet, including Shangri-La: A Travel Guide to the Himalayan Dream. His Tibet-themed website is at www.himmies.com