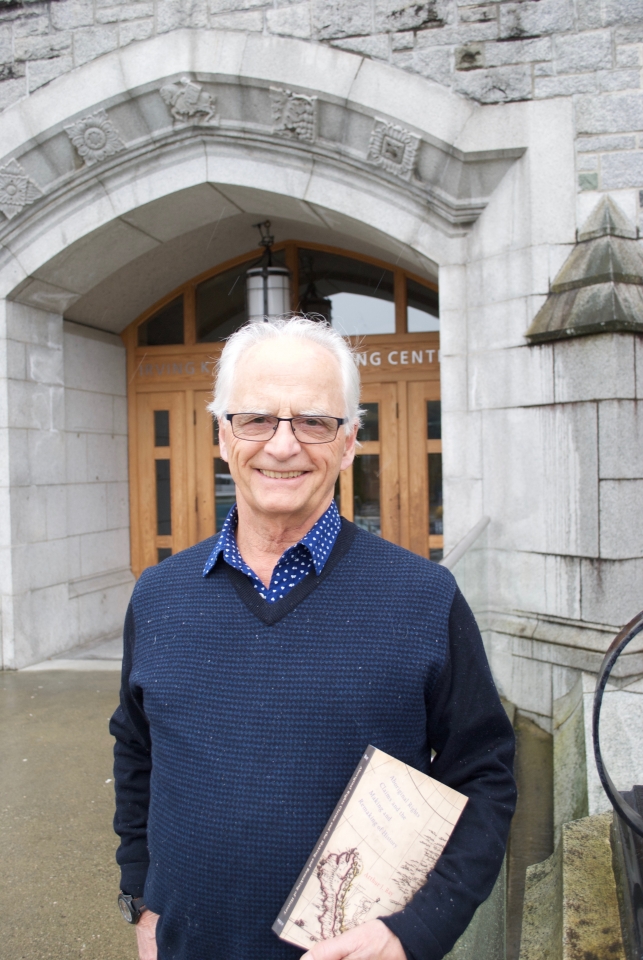 
Only two months after Arthur J. Ray's Aboriginal Rights Claims and the Making and Remaking of History (McGill-Queen's 2016) was selected as the winner of the 2017 Basil Stuart-Stubbs Prize for best academic book pertaining to B.C., Ray learned it also garnered the 2017 Canada Prize in the Humanities and Social Sciences awarded by the Federation.

Intended to appeal to a broad audience, this unprecedented, comparative overview looks at how indigenous people's rights have been handled in Canada, the U.S., New Zealand, Australia and South Africa.

Ray says this is true in all the countries he studied. "No country has been able to do one or the other; they have to do both."; He adds that case law and academic research actually evolve in tandem in what he calls a "circular cumulative process."; Each builds on the work of the other.

Ray says one of the big issues for either the courts or tribunals is perspective. Each group involved needs to be aware that others don't necessarily see things the same way they do. Native perspective is based on oral history and traditions, he says. Academic perspective (and European legal traditions) are based on documentary records.

The perspectives sometimes clash,"; he notes. "And one of the difficulties courts or commissions face is how to evaluate those different perspectives.";

For example, he says that to accommodate native perspectives, the courts have sometimes had to bend the rule that says hearsay evidence is inadmissible.

And he says there is no one perfect forum for accommodating varying perspectives. Whether it's the courts, a tribunal or a commission, each has advantages and shortcomings.

Aboriginal rights claims, he says, "challenge what are standard understandings of colonial history, because we have to consider from the Native perspective what the newcomers did.

In 1973, the Supreme Court's historic Calder decision on the Nisga'a community's title suit in British Columbia launched the First Nations rights litigation era in Canada. Arthur J. Ray's extensive knowledge in the history of the fur trade and Native economic history brought him into the courts as an expert witness in the mid-1980s.

"In Vancouver, in Courtroom 53 of the Supreme Court of British Columbia, where most of the Delgamuukw trial took place,"; he recalls, "distrust prevailed... Certainly searching for nuanced interpretations of the past is not a primary goal of litigation. My sense of frustration and irritation in the witness box in Delgamuukw led me to attend most of the subsequent court proceedings in that case. I also helped the members of the Gitxsan-Wet'suet'en's legal team to develop their cross-examinations of many of the government's key historical experts.";

Ever since he has been a part of landmark litigation concerning treaty rights, Aboriginal title, and Métis rights.

Legal claims have raised questions with significant historical implications, such as, "What treaty rights have survived in various parts of Canada? What is the scope of Aboriginal title? Who are the Métis, where do they live, and what is the nature of their culture and their rights?"

In Telling It to the Judge, Ray recalls lengthy courtroom battles over lines of evidence, historical interpretation, and philosophies of history, reflecting on the problems inherent in teaching history in the adversarial courtroom setting. Ray's narrative describes courtroom strategies in the efforts to obtain constitutional recognition of Aboriginal and treaty rights.

Ray's illustrated history entitled I Have Lived Here Since The World Began chronicles 12,000 years to set out the historical and cultural arguments for First Nations' land claims and other grievances. A revised edition contains new information on Donald Marshall and Mi'kmaq fishing rights in Nova Scotia. He contributed the section on Native history to the Illustrated History of Canada.

The recipient of the UBC Killam Research Prize, Arthur J. Ray works as a consultant on First Nations' claims across the country. He served as the co-editor of the Canadian Historical Review from 2003 to 2006.

Review of the author's work by BC Studies:
I Have Lived Here Since the World Began: An Illustrated History of Canda's Native People
Old Trials and New Directions: Papers of the Third North American Fur Trade Conference
Telling it to the Judge: Taking Native History