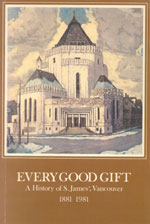 
Phyllis Parham Reeve is the editor/author of a family history, On Fiji Soil: Memories of an Agriculturalist; Based on the Journals of W.L. Parham, 1918-1942 (Suva: Institute of Pacific Studies, 1989). It is available via the internet here: https://books.google.ca/books?printsec=frontcover&vid=ISBN9820200423&redir_#v=onepage&q&f=false

When the internet arrived, she also scanned her father's extensive photo collection and posted it online in her Flickr account. See webpage: <http://www.phyllisreeve.com/>

She is also proud of her involvement in Witness to Wilderness: the Clayoquot Sound Anthology, edited by Howard Breen, Sandy Frances Duncan, Deborah Ferens, Phyllis Reeve and Susan Yates (Vancouver: Arsenal Pulp Press, 1994). She has contributed, as well, to Joe Rosenblatt: Essays on his Works, edited by Linda Rogers, (Guernica, 2006).

Phyllis Reeve wrote a history of the landmark St. James church in Vancouver's Downtown Eastside, built in 1935-1937 at 303 East Cordova. The Anglo-Catholic church was preceded by a St. James Church at Powell and Westminster Road (now Main Street) that was destroyed by the great Vancouver Fire of 1886. The melted bell of the first St. James church is stored at the Vancouver Museum. This church organized sponsored Vancouver's first public health nurse, Sister Frances, who was esteemed as the 'Florence Nightingale of the City' for her work during the smallpox outbreaks of the 1890s. Designed by Adrian Gilbert Scott, with Sharp & Thompson, the second St. James church is liturgically conservative, architecturally modern and socially liberal in its programs for the poor. Reeve's history of the church is called Every Good Gift: A History of St. James' Vancouver, 1881-1981 (Vancouver: St. James Church, 1981). 150 pp.

Reeve also edited the collaborative work begun by Charles Lillard and published by Sandstone Studio and Reference West as Malcolm Lowry's October Ferry: A Gabriola Island Tribute (1996). It emanated from a day-long tribute to Lowry held by the Sandstone Studio at Page's Resort on Gabriola Island on October 29, 1994. Speakers included Sandy Frances Duncan, Norman Newton, Patricia Merivale, Struan Sinclair, Joyce Woods and Anne Yandle. The transcript included photos of Lowry on the ferry to Gabriola and an image of Joyce Woods' Homage to Malcolm Lowry. Charles Lillard was in attendance and suggested the proceedings ought to be published.