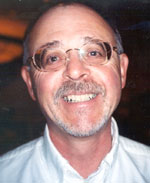 
Dennis Reid divides his time between poetry, short fiction and novels; and writing non-fiction about fishing. His work has been published in the U.S., United Kingdom, Mexico and India and has been translated into Spanish and Hindi. His sport fishing articles have been published in more than 25 magazines across North America. As a fishing columnist for the Victoria Times Colonist, he wrote Maximum Salmon and Fishing for Dreams. Coincidentally he has also co-written a golf history about Salmon Arm. Maximum Salmon was re-released as Maximum Salmon: Fishing the West Coast from Alaska to California (Harbour 2007). Reid says he catches and carefully releases 500 salmon per year.

As the President of the League of Canadian Poets, Reid released his tenth book, What it Means to be Human (Ekstasis 2010), his fifth collection of poetry. For his collection called You Shall Have No Other, Reid set about making 80 "poem videos" derived from his writing to be housed at his site called www.sandria.ca .

The Spirit of the Thing and the Thing Itself (Ekstasis 2015) is Reid's 12th book. He uses quotes from Rilke's series The Duino Elegies and from PK Page's hologram to address: war, religion, women, what there is left of family, nature, ghosts, and even a vignette from when he hung from a canyon above water before letting go.

EMPLOYMENT OTHER THAN WRITING: Finance, Freelance,


"Reaching into the invisible and pulling out the beautiful. This is fishing's greatest appeal. It is magic, and art form." -- D.C. Reid

As a self-proclaimed "hunter of fish" who brought more than 500 salmon to his net one year, D.C. Reid was weaned from a creek near Calgary with a "$12 K-mart no name special" fishing rod.

Today he's a Victoria-based sport fishing columnist, an expert who fishing lodges call upon to test waters and fly patterns. He's a natural in the arcane world of White Whoolly Buggers, Mickey Finns, spinners, plugs and whatever lands you fish. But meat fishermen beware: this is no "how to" bible.

In Fishing for Dreams: Notes from the Water's Edge (Touchwood, 2005), Reid is wonderfully lyrical, whether splashing in the shallows on a rainy day: "Noah's Ark rain that promised the land would never be dry. It washed the green out of evergreen", or casting into darker pools such as the "detour of divorce" or loss of connection with children.

Reid's prose is like a meandering current, carrying us through riffles, tidal pools or brushing against the seams of memory. With degrees in zoology and biochemistry, he's keenly aware of the natural world, and marries this with a poetic view of the landscape: "I pass the sparse pine forest, the veins of root-tracery on the skin of the forest floor." Instead of catching an elusive cutthroat trout, he caresses it with words: "I look into the water so clear a quarter could be seen on the bottom, its numbers and the queen. In the tail out among the river stones a cutthroat trout, coloured so like them it can be seen only when it moves. Red fan-shaped gills pass life through the insouciant pleasure of knowing it is beautiful."

As with any good fishing writing, there are some fine tales here too: alone, seeing tell-tale "scoops of jam" on the forest floor, and that feeling of being watched by bears hitting you in the back of the neck: "an antediluvian sixth sense for being a carnivore's prey." Later, a moment of terror facing a mother bear's "enraged, individual teeth." There is the electric charge of fish on line "the arc from rod tip to fish mouth is purity. It is the moment when most easily the trout may be lost and so the largest thrill in all of fishing." A solo fishing excursion for Coho in October is a bloody affair: "*now the Coho takes slippery flight around the deck, pulling my hand with its hook. I am bonking after the fish, a bonk here, a bonk there, the hook still in my thumb and the blood vessels behind my eyeballs bulging."

We travel to the East Kootenay in pursuit of Westslope cutthroat trout with bellies the colour of sunset. "These are the few days which we are truly alive - days of blue and oranges, of succulent water that requires no justification, no need of cell phones or laptops, no reminders of responsibilities that wait." There's a confessional story about 35 years of driving too fast down dirt roads in piscatorial pursuit, and a near death epiphany involving logging trucks and his rather small, maroon Subaru.

Next aboard a fish packer, sliding down the coast from Prince Rupert, past ghost towns like Butedale which "has houses some night-time giant picked up in his hand and dropped like toys. These houses line the harbour, off their moorings, turning to the sun-robbed silver that is paint retired to anonymity." A day fishing with fellow poet Patrick Lane yields four fish, a new poem and later, a Bliss Carman award. A solo boat journey from Victoria to Tofino borders on farce after a fuel miscalculation and a blown hatch - with potential to take boat and fisherman to the bottom in one gulp.

A solitary man, Reid writes "I am drawn from people, a loner like a metronome, unclear of where I should be. The only ones I ever got to know were my children in the 8 years I spent at home with them. You give yourself up to you children, knowing it is right. Then the bond was broken, and a decade has gone by. What more can I say?"

Since landing those 500 salmon in 2002, Reid says he's finished with counting fish. He now records the "specifics of technique, strategy and specifics of river hydrology that would inform the rest of my years." In 'Fishing for Dreams" it's clear he also savours those rare moments of purity: the arc of the rod, light dancing on water and fish to be thankful for.