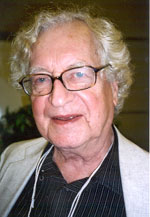 
"Reid was Letterpress Man personified. As for computer-generated type and the personal computer, an association would have been as unthinkable as making love to a porcupine." -- Geoff Spencer on Robert R. Reid as a typographer and designer.

Born in 1927 in Medicine Hat, Robert Russell Reid is a fifth-generation Canadian who was brought to the coast in 1936. A gift of a printing press from his sister at age nine changed his life. He grew up in Abbotsford and Vancouver and taught himself to operate a handpress in order to undertake letterpress printing at age 14. Upon his graduation from University of British Columbia, he set up a printing shop on West Pender Street where he produced some of the first fine private press books in Canada. The first of these for his own pleasure was a reprint in 1949 of the first non-governmental B.C. book, Alfred Waddington's The Fraser Mines Vindicated, first printed in Victoria in 1858. It was handset in 12 point caslon old style and printed two pages at a time on Hurlbut Cortlea antique paper with an 8 x 12 foot-treadled platen press. Marbling was executed by the printer and it was "bound by hand at the shop of Mr. M. I. Sochasky." Reid taught printing and typographic design at the Vancouver School of Art and became a member of the Canadian Royal Academy. In 1952 he was joined in his print shop for six months by Takao Tanabe, the painter, who later set up his own press and produced books and printed ephemera for some years. As a B.C. Centennial project, Tanabe and Reid jointly reprinted F.G. Claudet's Gold: Its Properties, Modes of Extraction, Value, Etc., originally printed 100 years previously.

Robert Reid moved east in 1962. After touring the world on a Canada Council Fellowship in 1963, he was hired as the director of production and design for McGill University Press in Montreal. There he began a second private press, called The Redpath Press, and he once redesigned the Montreal Star newspaper. In addition to working as a designer and producer of scholarly books, he later wrote and designed travel books in New York and Los Angeles, and he owned and operated a private press and publishing company in New Haven, Connecticut. He has since returned to live in Vancouver where he privately produced five volumes of very limited edition memoirs.

Having saved copies of World War II newspapers for 50 years, Robert Reid also designed and authored a collection of Vancouver Sun, Vancouver Daily Province and Vancouver News-Herald front pages from World War II. "The Sun's beginning is interesting," he wrote. "Founder Robert Cromie was private secretary to Colonel J.W. Stewart, a powerful political figure who had to leave town over some construction contracts. Cleaning out his effects, Cromie found some worthless stock in the Vancouver Morning Sun, a bankrupt Liberal Party newspaper. Rather than throw it out, he used the stock to take over control of the paper, then bought another evening paper, the World, in 1924, and merged them into The Vancouver Sun. With The World he got the building at the corner of Beatty and Pender that became the famous Sun Tower. A stylish man who entertained lavishly, Robert Cromie died tragically of a stroke in 1936 at the age of forty-nine. Two sons, Don and Sam, took over and published the Sun during the war years."

In his introduction to his re-issued version of Fraser Mines Vindicated (1949), often cited as the first book published in B.C. by a B.C. author, Reid wrote "There is another element, personality, without which a book is lost. It results from the designer imparting something of himself-his love for fine books, his consequent sincerity of purpose, his grasp of the elementals of the printing craft-into his books";.

Coinciding with Reid's 80th birthday, an evening celebrating six decades of work by typographer, designer and private press printer Robert R. Reid was held at Simon Fraser University - Harbour Centre in Vancouver on November 16, 2007. Called Reidfest, it included Charlie Mayrs, a student of Reid's at the Vancouver
School of Art from 1957 to 1961; Peter F. McNally, Professor, School of Information Studies at McGill University; Rollin Milroy, proprietor of Heavenly Monkey, who published Reid's Leaves: A Bibliography of Books from the Private Press of Robert R. Reid,published in Vancouver from 1949 to 1962 ... [2001]; and artist Takao Tanabe, who operated Periwinkle Press and collaborated with Robert R. Reid on numerous projects.

Haig-Brown, Roderick. The Living Land: An Account of the Natural Resources of British Columbia (The Macmillan Company of Canada Limited, Toronto, 1961).

Articles: 1 Article for this author
Another summary
Biography


Born in Alberta in 1927, Robert Reid moved to Vancouver at the age of nine. It was shortly thereafter he received his first printing set - a toy made from tin, with rubber type - and a lifelong obsession was sparked. He played at printing newspapers, and worked at printing cards, through his teenage years. During his first year at the University of British Columbia (commerce, as befits any solid young man of Scottish stock), the sight of a rubricated volume on display in the library sparked his desire to print a book. Two years later, in 1949, he issued his first limited edition, a reprint of Alfred Waddington's The Fraser Mines Vindicated, the second book printed in B.C. (by a few weeks).

1950s
The success of Fraser Mines convinced Robert to pursue his passion for printing, and he established his own shop in downtown Vancouver. Through the 1950s he did a wide range of commercial printing (sometimes using the imprint Graphos Press), including the B.C. Library Quarterly magazine, and came into contact with many of the artists emerging from the West Coast at the time, including Bill Reid. He also was typographic adviser to the editorial committee at the University of British Columbia, and designed many of the university's publications during the period.

1960s
Robert published three more limited editions - The Journal of Norman Lee (1959), Kuthan's Menagerie of Interesting Zoo Animals (1960), and poet John Newlove's first collection, Grave Sirs: (1962) - before departing for Montreal and a job as in-house designer for McGill University Press. It was there that he led production of what remains his magnum opus, The Lande Bibliography of Canadiana. The book remains one of the most ambitious and beautifully crafted limited editions in Canada's publishing history.

1970-90s
In the early 1970s Robert decamped for the center of the publishing universe, New York, where he spent the next 25 years packaging over a million books for major publishers. He also assembled his own printing shop at his home in New Haven, but had too many distractions to ever tackle a major publishing project (his capacity for just having fun in a print shop knows no bounds). He and his partner Terry Berger did print on commission a limited edition comic book titled Pixie Meat, featuring the work of Gary Panter, Charles Burns, and Tom De Haven - all major artists in the field of alternative comics (i.e. comix). He also printed five broadsides, includings poems by Ferlinghetti and Ginsberg, but none of these travelled farther than his friends and acquaintances - the fun was in the doing.

CURRENTLY
In 1998 Robert returned to Vancouver. Though retired, his passion for books and everything related to their creation had not diminished. He collaborated on a bibliography of his five Vancouver limited edition books, titled Reid's Leaves (Heavenly Monkey 2001), featuring actual sample pages from three of the books. He's published two more projects with Heavenly Monkey, both limited editions printed letterpress. And he's produced a number of elegant digitally-printed limited editions, including his own six-volume memoirs.