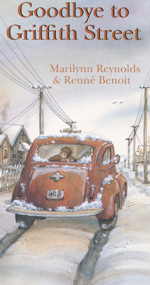 
Marilynn Reynolds was born in Sudbury, Ontario, where her father worked in the nickel mines and her mother taught piano. Following her parents' separation, she and her mother moved first to Nipigon in northern Ontario in 1947, just after her seventh birthday, then to several locations in Vancouver and finally to Calgary where she grew up. A voracious reader, Reynolds won the IODE Provincial Creative Writing Scholarship to the Banff School of Fine Arts when she was 16, and later received a BA degree in English Literature from the University of Alberta. After graduation, she worked as a reporter and book reviewer for The Edmonton Journal. She is also a former Edmonton editor of Western Living Magazine. When her two daughters were grown, Reynolds left Western Living and began to fulfill her lifelong goal of writing for children. Her first books were inspired by her grandparents' stories of pioneer life on the Canadian prairie. Reynolds' historical picture books include Belle's Journey, The Magnificent Piano Recital and A Present for Mrs. Kazinski. Later books recall memories of her own childhood, such as Goodbye to Griffith Street, which won Reynolds the Christie Harris Illustrated Children's Literature Prize in 2005. Reynolds has a large collection of early family photos that she uses to complement the presentations she gives to children and adults in schools and libraries across Canada.

"Spanish Flu, as it was often referred to because of its early onset and heavy mortality rate in Spain, appears an unlikely topic for a picture book. Yet Marilynn Reynolds has distilled a story of global devastation into the experience of one young city boy for her children's book The Name of the Child (Orca 2002 $19.95). The great influenza epidemic of 1918 felled an estimated 20 to 30 million people, more than all the casualties of WW I, even more than the entire four-year death toll of the Black Death Bubonic Plague, and has been called the most savage epidemic in recorded world history. Some reports have estimated up to one-fifth of the world's population was infected. In The Name of the Child, Lloyd, who's afraid of strange dogs, lightning, the dark and getting lost, is sent to live with relatives in the country, in the belief he'll be safer there. Only a day after his arrival, his aunt and uncle become ill. By nightfall, Uncle John is convinced their new baby, so young he's not yet named, and Lloyd, must get to the safety of a neighboring farm. "Flu is catching,"; he says. "Just sit in the wagon with the baby on your lap. Old Bob will take you there."; But it's dark and thundering and the rain, pouring down on Lloyd and the baby, turns the dirt road to treacherous mud. The horse-drawn wagon tilts and mires and Lloyd is forced to continue on foot, carrying the tiny baby, with only the repetition of an old nursery rhyme to keep his many fears at bay. Illustrator Don Kilby has worked as a lumberjack and steelworker and draws on his time living on the prairies for the rural images of country roads, farmhouses, kerosene lanterns and a green painted kitchen hutch." [by Louise Donnelly / BCBW Winter 2002]

ARRIVAL IN BRITISH COLUMBIA: Marilynn Reynolds moved to Victoria from Edmonton in 2004


As she did for Belle's Journey and A Dog For a Friend, Marilynn Reynolds has drawn inspiration from family tales heard on her grandparents' Saskatchewan farm for The New Land (Orca $16.95) which chronicles the first year on the prairies for a pioneer family. Victoria animator Stephen McCallum, illustrator for all three Reynolds' books, evokes the loneliness of the unsettled prairie.