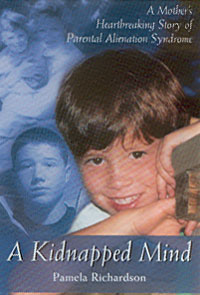 
Presented as the story of an "indefatigable mother's fierce love," Pamela Richardson's A Kidnapped Mind: A Mother's Heartbreaking Story of Parental Alienation Syndrome (Dundurn 2006) is a memoir of losing her son, Dash, during an eight-year custody battle, then ultimately to death. With an introduction by a "divorce and custody consultant" named Dr. Reena Sommer, this harrowing tale of domestic strife attributes the estrangement of Richardson's son to "Parental Alienation Syndrome" as triggered by the cruel and insidious "brainwashing" of her son by her ex-husband. Published in the wake of Richardson's ex-husband's death, A Kidnapped Mind could have educational value for anyone who cannot imagine the prolonged treachery of an ex-spouse. The Vancouver author formerly worked as a minor television personality before marrying her second husband.

Articles: 1 Article for this author
A Kidnapped Mind (Dundurn $24.99)
Review


"Agents now tell their fiction-writing clients to write narrative non-fiction, compelling stories of autism, alcoholism, abuse and Alzheimer's (and we're not even through the A's)."; - Martin Levin, books editor, the Globe & Mail

A Kidnapped Mind (Dundurn $24.99) by Pamela Richardson with Jane Broweleit and Walking After Midnight (Raincoast $32.95) by Katy Hutchison both fall into the category allegedly recommended by literary agents [see quote above]. They are compelling non-fiction narratives that revolve around turbulent teenagers.

Pamela Richardson's story begins when her former husband gains custody of their four-year-old son. As a criminal lawyer, his legal knowledge and his influential friends enabled him to sway the presiding judge. Although this is a highly subjective first person account, written after the former husband and son have died, it seems clear that Richardson's depiction of the arrogance and blindness of the judicial system has some foundation.

Judges persisted in favouring the father, in spite of evidence of his alcoholism and neglect. Their rulings were bolstered by reports by court-appointed psychologists who recommended that the child remain with his father even while they acknowledged the
father had "a drinking problem"; and suffered from Adult Attention Deficit Disorder. From the beginning, he used the child as a means of tormenting his former wife, obstructed her legal access, and poisoned her relationship with her son.

Some brave friends testified to the father's misdeeds while many others (including one of the mother's lawyers) backed off, allegedly intimidated by his threats of violence. When the courts belatedly recognized the damage facilitated by earlier decisions, it was too late.

Court decisions can be reversed but not the years of damage they have caused. Richardson brought in experts on Parental Alienation Syndrome and used her considerable wealth in a last desperate attempt to force him into rehab programs. She never gave up the battle for her son, but she was helpless to prevent his downward spiral. At the age of sixteen he jumped to his death from the Granville Street bridge. The book-jacket description of this story as "heart-breaking"; is no hyperbole.

In contrast to that downward spiral, Katy Hutchison begins her true story with a tragic event and proceeds upward through healing and redemption. The event, which received a great deal of media coverage, was the murder of her husband by teenagers at an out-of-control party in Squamish.

Bob McIntosh, a lawyer and captain of the Canadian triathalon team, was celebrating New Year's Eve 1997 with his family and friends, when he decided he should check out a disturbance at the home of a neighbour who was away on holiday. He found more than 100 teenagers, high on liquor and drugs, engaged in a rampage. One partygoer struck McIntosh on the head, knocking him to the ground, another kicked him in the head. McIntosh died instantly.

The core of this book is Katy Hutchison's determination to endow the pointless waste of a life with some transcendental meaning, and to move beyond the melodrama of villain/victim. She started out, equipped with compelling visual aids, speaking to high-school students against the dangerous habits that lead to the death of an outstanding athlete and lawyer, to the bereavement of four-year-old twins, and to two teenagers being convicted of murder.
Recognizing that her husband's murderer was a mere teenager, capable of rehabilitation, and with a suffering mother of his own, she reached out to him. She followed up a video message to him with a meeting in which she repeated her message: "All I want for you is what you took from Bob-a happy and productive life.";

She succeeded in establishing a close relationship with her husband's killer, supporting his parole appeal, and allowing him to participate in her speaking engagements. Her work in restorative justice has garnered various awards such as The Courage to Come Back Award and The Women of Distinction Award.

These books are not without flaws. They are frequently self-indulgent, sentimental, humourless and self-serving. Yet they have the merit of focusing attention on our legal and justice systems. Both will likely gain attention in the media, largely because both women have televisual potential-a fact exploited by the placing of their photographs on the front as well as the back flap of their book jackets. In the case of the Raincoast book, video clips of the author performing on camera were distributed to the media; in the case of the Dundurn book, the main author was described as a former television host. Their stories will generate lively discussions among readers, and particularly among earnest book club members. No doubt they both have a good chance to get onto Oprah Winfrey. But the phenomenon of which they are part invites certain questions.

The moral fables and cautionary tales of the Middle Ages, the saints' lives, the conduct books of the nineteenth century, have always enjoyed a wide appeal. Only recently, however, have agents touted such books above literary fiction, as Mr. Levin suggests. And the displacement and devaluation of literary fiction (as of all other art forms) is a worrisome trend. It might be useful if agents were to remind their clients that along with such worthy non-fiction subjects as Parental Alienation Syndrome and Restorative Justice, they consider promoting literary fiction and risking some restorative creativity.

Whatever high-minded purposes lie behind these books-consolation, inspiration, moral instruction-they are not strong as literature. I wonder if the proliferation of such books feeds a genuine hunger in the reading public? Or does it fulfill a need created by public relations and marketing departments?
Kidnapped 1-55002-624-0; Walking 1-57224-503-4

--Review by Joan Givner who has written on biography and autobiography
for many years.