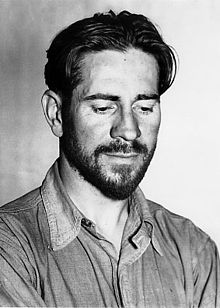 
Born in 1897, Ed Ricketts of California made three excursions to British Columbia in 1932, 1945 and 1946 to collect marine specimens as a mostly self-taught ecologist and biologist.

With a small laboratory in New Monterey, California, Ricketts was close friends with the philosopher Joseph Campbell and the novelist John Steinbeck. Campbell accompanied Ricketts on his first trip to the Queen Charlotte Islands in 1932; Steinbeck modeled several characters in his fiction on Ricketts, including 'Doc' in the 1945 novel Cannery Row.

Ed Ricketts died when he was hit by a train near Cannery Row in May of 1948. At the time he and Steinbeck had been planning a trip to British Columbia to satisfy Rickett's intention to write a book about B.C. coastal marine life to be called The Outer Shores. Rickett's first book, co-written with Jack Calvin, was about Pacific invertebrates and called Between Pacific Tides (1939). It was followed by Sea of Cortez: A Leisurely Journal of Travel and Research (1941), co-written with Steinbeck.

In 2004, at age 32, Ucluelet-raised journalist Eric Enno Tamm published the first biography of Ed Ricketts called Beyond the Outer Shores (Raincoast 2004). The son and grandson of commercial fishermen of Estonian descent, Tamm had started investigating Ricketts' life as a result of his research into his own hometown. He published an article about Ricketts in the Georgia Straight in 1999, and continued his research into Ricketts' life while he spent several years living in Sweden.

Whereas the sometimes stormy relationship between Ricketts and Steinbeck was well-known, Beyond the Outer Shores provided fresh insights into the friendship between Ricketts and Campbell based on Tamm's interviews with Ricketts' son and daughter, and his girlfriend in the 1940s, Toni Jackson. Tann's history of the friendship and rivalries between Steinbeck, Campbell and Ricketts contains a section outlining the three-month voyage made by Campbell and Ricketts around the Queen Charlotte Islands in 1932 in the Grampus, a small cruising vessel. At the time Campbell was escaping the wrath of Steinbeck for cultivating an affair with Steinbeck's wife Carol.

Tamm was employed by Ecotrust Canada when his Ricketts biography appeared.

Ed Ricketts is repeatedly cited as inspiration for the main character in Louis Druehl's novel set in Bamfield, B.C. during the 1970s, Cedar, Salmon and Weed (Granville Island Publishing 2015).