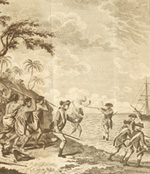 
"King exaggerates the influence of what Lieutenant Rickman did at the southern point of Kealakekua Bay, and blames the 'fatal turn in the affair' on Rickman."; -HISTORIAN GAVIN KENNEDY

John Rickman was a little-known Second Lieutenant aboard the Discovery when Captain James Cook visited Nootka Sound in 1778. Cook's third voyage ended in October of 1780 but publication of the official account from the Admiralty was delayed. In those days the Admiralty required all copies of diaries kept at sea to be relinquished at the end of exploratory and scientific voyages. Thus when John Rickman decided to publish his account in 1781-the first eyewitness account of British Columbia written and published in English-he had to do so anonymously. His version of events first appeared in 1781. According to historian Barry M. Gough, several editions of Rickman's account appeared that year; two from E. Newberry in London, one from Dublin and one from Germany, plus a French edition appeared in 1782 and a two-volume American edition was published from Philadelphia in 1783. A revised version appeared from England in 1785.

It was Rickman who first conveyed to the public the chilling details of Captain Cook's death and dismemberment in Hawaii. Possibly Rickman took the risk of publication because he correctly anticipated Lieutenant James King would insinuate in the official version of the voyage that Rickman's conduct had been partially responsible for the assault on Cook. During the beach melÃ©e on February 14, 1779, Rickman had led a party that killed one of the chiefs, Kareemoo, about a mile from the fatal confrontation with Cook that followed. "Muskets were fir'd by Mr Rickmans party,"; wrote James King, "who were in boats at the Soermost part of the bay, keeping in the Canoes, in doing so they killd a Very principal Chief.";

Derivative works by Andrew Kippis and Reverend William Ellis supported King's view that Rickmen's men had precipitated the crisis. Much later Reverend Ellis wrote, "... a man came running from the other side of the bay, entered the crowd almost breathless, and exclaimed, 'It is war!-the foreigners have commenced hostilities, have fired on a canoe from one of their boats, and killed a chief.' This enraged some of our people, and alarmed the chiefs, as they feared Captain Cook would kill the king. The people armed themselves with stones, clubs and spears. All the chiefs did the same.";

William Bligh strongly implied that Rickman was not at all blameworthy. The accounts of James Burney, David Samwell and Thomas Edgar corroborated this opinion. "Cook's orders and actions made a confrontation inevitable,"; concluded historian Gavin Kennedy in The Death of Captain Cook. The marine guard accompanying Cook fired in a panic and fled, leaving Cook to the mercies of the mob. It is likely that King and Ellis, among others, agreed to scapegoat Rickman as a means of protecting Cook's reputation.

Less encumbered by the politics within the British Admiralty, Ledyard, the American, offered some of the more astute and independent reportage. He took the radical view that Cook was himself chiefly to blame-not the Hawaiians, nor Rickman.

When the supremely confident captain was alerted that Kareemoo's brother vowed revenge, "Cook attended to what the man said, and desired him to shew him the Indian that had dared to attempt a combat with him, and as soon as he was pointed out Cook fired at him with a blank. The Indian perceiving he received no damage from the fire rushed from without the crowd a second time, and threatened any one that should appose [sic] him. Cook perceiving this fired a ball, which entering the Indian's groin he fell and was drawn off by the rest.";

For many years it was presumed that the author of John Rickman's anonymously published memoir was John Ledyard because Ledyard had used Rickman's memoir as a basis for his own factual information. The prolific British Columbian historian Frederic Howay clarified the matter in 1921 with his contribution to the Washington Historical Quarterly called "Authorship of Anonymous Account of Captain Cook's Last Voyage.";

Journal of Captain Cook's last voyage to the Pacific Ocean on Discovery; performed in the Years 1776, 1777, 1778, 1779, illustrated with Cuts, and a Chart, shewing the Tracts of the Ships employed in this Expedition. Faithfully Narrated from the original MS. (London: Printed for E. Newberry, at the corner of St. Paul's Church Yard, 1781) Anonymous; An Authentic Narrative of a Voyage to the Pacific Ocean Performed by Captain Cook, and Captain Clerke. 2 vols. (Philadelphia: Printed and sold by Robert Bell, in Third Street, 1783).